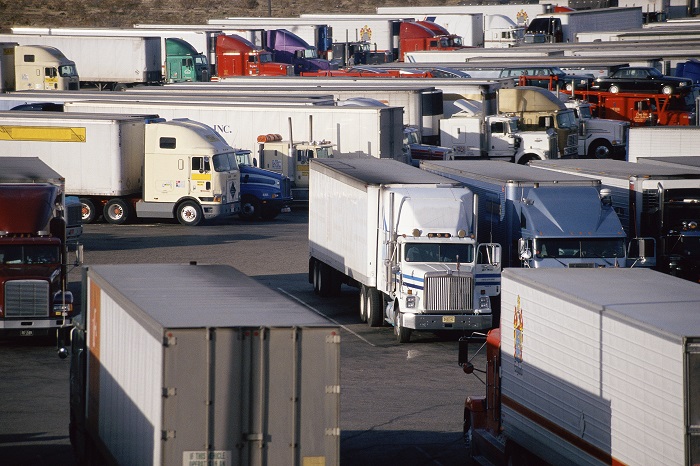 A coalition of trade groups wants Congress to advance a controversial plan that would get younger truck drivers on the road. (Above: A truck stop in California, United States.) Photo credit: Shutterstock.com.

US shippers and distributors stung by rising truck prices want Congress to pass legislation that would put younger truck drivers behind the wheel. That could eventually increase available truck capacity, although it wouldn’t alleviate immediate pressure shippers of all kinds are feeling on US highways.

Forty-two US trade associations, including bakers, retailers, chemical, and electrical distributors, and trucking companies, on Monday urged US Rep. Bill Shuster, R-Pa., to support the DRIVE-Safe Act, a bill introduced in March that would create apprenticeships for truck drivers under 21 years of age.

The trade groups sent a letter to Shuster, who chairs the House Transportation and Infrastructure Committee, and ranking member Peter DeFazio, D-Ore., calling on them to advance the bill quickly.

Current federal regulations require interstate truck drivers to be 21 years old. The American Trucking Associations and other trade groups argue that discourages high school graduates from considering careers in trucking. They want apprenticeships for 18- to 20-year-olds that lead to driving jobs.

But the idea of putting 18-year-olds in tractor-trailers, even with an instructor, doesn’t have universal support. The Owner-Operator Independent Drivers Association, which represents self-employed truck drivers, opposes the DRIVE-Safe proposal, as do consumer and insurance organizations.

Whether DRIVE-Safe passes or not, trucking companies aren’t waiting. Pitt Ohio Group, for example, in Pittsburgh has created a four-year apprenticeship that starts young employees on the docks and gradually introduces them to smaller straight trucks before working them up to tractor-trailers.

Other carriers, from Werner Enterprises to Old Dominion Freight Line, are investing in driver schools. “We think there’s an [opportunity] for a graduated [commercial driver's license] program that allows young individuals just out of high school to get into trucking,” Craig Callahan, executive vice president and chief commercial officer at Werner, said at the NASSTRAC Shipper Conference in May.

The DRIVE-Safe Act would set up a two-step training program for younger drivers. Candidates would be accompanied in the cab by experienced drivers for a total of 400 hours of on-duty time with at least 240 hours of driving time.

In addition, trucks would be required to be outfitted with the latest safety technology, including active braking collision mitigation systems, forward-facing cameras, engine speed limiters set at 65 miles per hour or less, and automatic or automated manual transmissions.

“The truck driver shortage is slowing the movement of commerce in this country, raising consumer prices and wait times for goods,” said Mark Allen, president and CEO of the International Foodservice Distributors Association. “Nowhere is this threat more evident than in the foodservice distribution industry, which delivers food and supplies to the over one million professional kitchens across the country every day,” Allen said in the June 18 letter.

Rising truck rates, the trade groups said, pressure shippers to raise their own prices. “In many supply chains, companies are being forced to increase prices to account for higher transportation costs,” they said. “This will ultimately result in higher prices for consumers on everything from electronics to food.”

While trucking executives hope to recruit more truck drivers direct from the US military, ultimately, they believe they need to cast a broader net.

“I don’t know that I’m a fan of putting an 18-year-old in a truck, but the industry has to do something,” Tom Connery, president and chief operating officer of New England Motor Freight, said at the NASSTRAC conference.

This is not the solution to