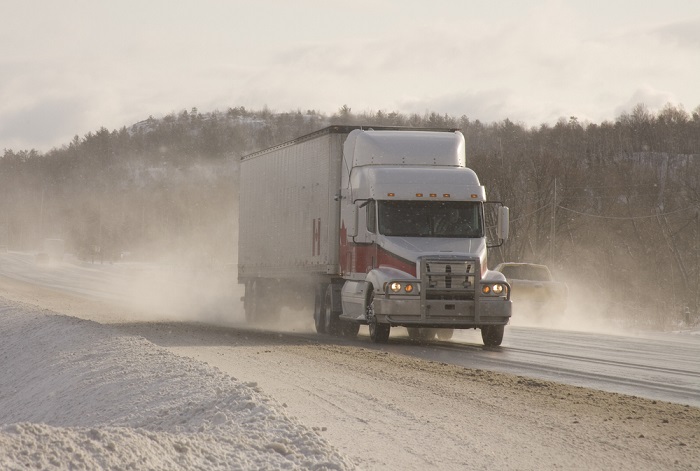 Truck drivers across North America have seen wages rise, sometimes more than once in 2018, according to the National Transportation Institute in the US. (Above: A truck travels in Canada.) Photo credit: Shutterstock.com.

A proposal to bring foreign workers into Ontario as truck drivers is under fire from the Teamsters union, while trucking interests in Canada’s industrial heartland say they need more workers, even if they come from overseas, to keep freight moving.

The dispute highlights the difficulty trucking companies on either side of the US border have recruiting enough new drivers to meet demand, even as driver pay rates climb higher. Ontario led Canada in net employment gains in 2018, with an unemployment rate of 5.4 percent.

Canada’s national jobless rate in December was 5.6 percent, higher than the 3.9 percent rate in the US but still its lowest level in 43 years, according to Statistics Canada. Employment in transportation and warehousing rose by 15,000 across Canada in December.

Even so, low unemployment rates mean it is more difficult to find new truck drivers.

The provincial association has supported using immigration to fill truck seats for some time. Immigration work programs in Canada vary from province to province, with some jurisdictions offering qualified immigrant truckers permanent residence — but not Ontario.

“While such a program couldn’t solve the industry’s acute labour shortage completely, without access to the same immigration channels currently available to other trade sectors, the trucking industry’s labour supply will soon be reaching a crisis point,” the OTA said in a statement.

“Trucking companies can’t move overseas, so they’re trying to bring cheap labor to Canada,” said François Laporte, president of Teamsters Canada. “Instead of trying to suppress wage growth, the OTA should be looking at ways to give truckers a big raise.”

Truck drivers across North America have seen wages rise, sometimes more than once in 2018, according to the National Transportation Institute in the US. On average, US trucking wages rose slightly less than 10 percent in 2018, NTI principal and founder Gordon Klemp said.

Higher pay hasn’t drawn enough new recruits to the industry, at least to larger carriers, he said in late December. “Driver supply is not elastic to pay right now,” said Klemp. Trucking companies are questioning where new recruits will come from as older drivers retire.

Teamsters Canada is urging Ontario to reduce truck driver licensing costs that can run north of $10,000 and make trucking a skilled trade, which would give prospective drivers access to grants and other subsidies. Trucking is also considered “unskilled labor” in the US.

The OTA and its national counterpart, the Canadian Trucking Alliance (CTA), have been working on solutions to the driver problem. The CTA formed a “blue ribbon task force” in 2011 to investigate the root causes of driver hiring and retention problems north of the border.

“While not the only concern, compensation is inescapably the overriding issue” behind any existing or prospective shortage of drivers, the alliance of provincial associations said.