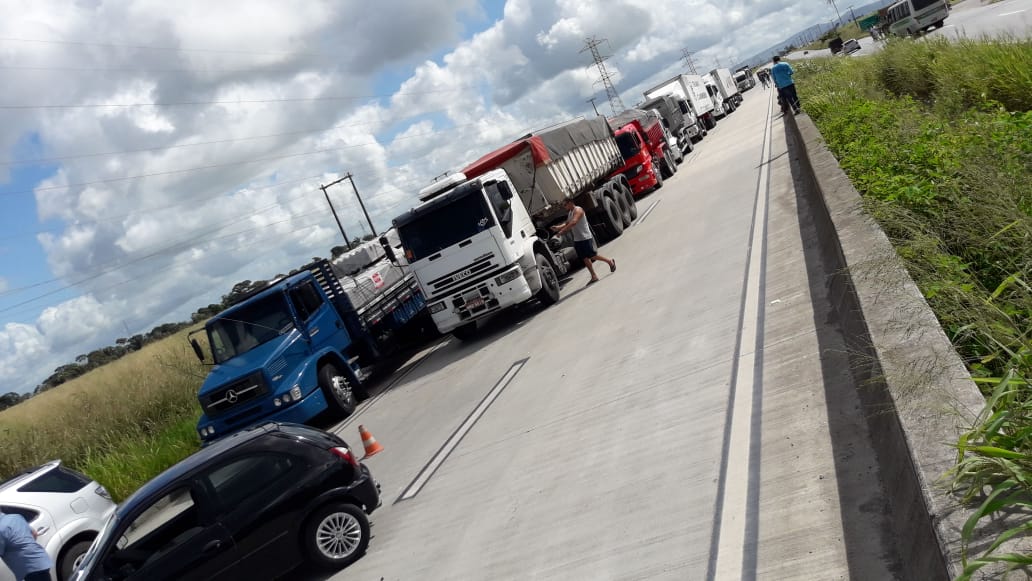 Estimates of the strike’s cost to shippers, from beef exporters to white goods importers, range from $5 billion to $15 billion. Photo credit: Rob Ward.

The more than week-long, nationwide Brazilian truck strike and blockade in late May laid bare the country’s inability to shore up its containerized rail network, increasing shipper dependence on a trucker workforce too numerous and often hampered by the inefficiencies of marine terminals.

Estimates of the strike’s cost to shippers, from beef exporters to white goods importers, range from $5 billion to $15 billion. There was also the cost of pride, seeing the country’s road and port networks clogged and the world taking note.

“It is insane,” a São Paulo-based auto parts shipper told JOC.com. “To be held to ransom like this by one truckers’ union is not how a market economy is supposed to work, and successive governments have failed to address the imbalance between road, railroad, and sea/navigable waterways. In Brazil, whoever screams loudest wins, [referring to the powerful trucking lobbyists].”

The Brazilian truck strike was the latest in a series of blows to shippers’ supply chain reliability. On May 17, the truck drivers serving the Port of Santos, South America’s busiest container gateway, launched a one-day blockage. Since November, shippers and Santos marine terminals have been grappling with strike and slowdown actions from the Receita Federal (customs office department).

Strike was last factor in a ‘perfect storm’

“It was indeed a perfect storm. There were already bottlenecks in the system from the constant work actions of the Receita Federal, plus the port of Santos’ right bank is a bottleneck in itself. Road reconfigurations have started to try and remedy that, but overall we absolutely must increase the number of containers, and cargo in general, that are moved by railroad,” one veteran Santos shipping agent told JOC.com. “Every year, politicians both here in Santos and in Brasilia make promises to increase the percentage of boxes to be moved by railroad, and every year almost nothing happens.”

The agent said the Brazilian truck strike and blockade was nearly inevitable because the administration of President Michel Temer waited until the last minute to negotiate with the Association of Brazilian Autonomous Truck Drivers (Abcam) even though the latter had been threatening actions for six months. He worries that trucker tensions will flare again, as the government’s conciliatory efforts — a 60-day diesel price reduction, the creation of a minimum freight rate (FRT) for truckers on all government-associated contracts, and a reduction in road tolls — is unworkable for shippers and ocean carriers.

Critics say the minimum freight rates are so high that it makes moving goods — both in containers and dry and liquid bulk — so expensive for shippers they warn of loss-making trips and even losing export orders, saying they will no longer be globally competitive.

“I think that we truckers have maybe fallen into a trap of the government that, in order to end the paralysis, they agreed to create a freight table, knowing full well that it would be blocked at this point. And now, how are we going to respond if we don’t unblock this?” questioned Abcam president José da Fonseca Lopes in a statement, suggesting that more work actions, but maybe not full-out blockades, may be the only response.

Cade, the antitrust body in Brasilia, suggested that almost any kind of FRT may be illegal. Temer has promised to abide by the final Supreme Court decision, leading Abcam leadership to believe they are being conned.

Robert Grantham, a consultant with Solve Shipping, said that although the government had been “very clever” in leaving the final decision to the Supreme Court, he doubted there would be widespread blockades as bad as those in May.

“Will they strike again? It’s hard to say, but I would suggest probably not,” Grantham said. “The consequences of the last blockades and paralysis were so ruinous for the country, and well-reported. But the truckers could threaten some minor stoppages/blockades here and there.”

Brazil, the eighth-largest global economy, with a $2 trillion GDP, according to International Monetary Fund data, is nevertheless over-dependent on its roughly 1.2 million truckers to move freight within its 3.3 million square miles and to its 210 million citizens. Truckers often haul goods more than 1,000 miles.

Brazil has a coastline of 7,400 kilometers (4,598 miles) and is suited to more cabotage, but the legacy of the government of Juscelino Kubitschek, from 1956 to 1961, and the various governments that followed (especially the military governments from 1964 to 1985) which all favored the trucking industry and ripped out rail infrastructure still haunts. Although estimates vary, an average of surveys suggests 30 to 35 percent of general cargo and dry bulk (mostly soybeans and iron ore) moves by railroad, but just 3 to 4 percent of containerized freight moves on the rails, despite Brasilia government pledges to get that share to one-fifth.

There’s been a lack of long-term planning for logistics. Former president Dilma Rousseff in late 2015 gave the already powerful trucking lobby another boost by authorizing incentives for truckers to buy more fuel-efficient rigs. The regulatory change took effect right before Brazil entered a deep recession that it’s only pulling out of now, leaving the nation’s trucker workforce of 1.2 million facing downward pressure on rates while having to weather higher fuel prices.

One of the key demands from the truckers was to raise trucking freight rates so “they can hope to earn enough for a decent living,” according to Abcam.

Hopefully, the strike will draw the industry and government’s attention to the need for more containerized rail development, said Alan Lear, operations director for Lachmann Group Terminals. The company has a rail terminal in Taubate, between Rio de Janeiro and Santos, and an inland bonded terminal at São Bernardo do Campo on the outskirts of São Paulo.

“It would help if the railroad operators offered more to shippers in the container sector and invested more in it, but they are not keen to do so,” Lear said. “Right now, the railroad companies are only concentrating on their core business [grains, soy, and iron ore]; containers and industrialized cargoes are just a sideline.”

Unlike with bulk cargo, where rail operators can simply discharge loads and pick up more cargo, they have to deliver the containers, pick up the equipment, and make sure rail services are timely.

Rodrigo Paixão, CEO of Contrail Logistica, which operates several services to and from Santos and has seen its box handling triple since the strike, agrees with Lear that the government may need to step in and encourage rail operators to nurture a more rapid expansion in the container sector.

Brazil’s rail network — years, if not a decade, to build out

According to news reports, Bernardo Figueiredo, a former president of the National Land Transport Agency (ANTT), told journalists in Brasilia that it will take a long time to build up the rail network to the dimensions of the United States or Europe, where 25 to 40 percent of containers move by rail. He bemoaned the red tape that delays truck and train turnaround in Brazilian ports, costing shippers money and time.

“The truckers make sacrifices to continue working, while the cargo supply has not yet recovered. Improving the railroad will take a long time, so the country needs to get along and take care of the road and truckers and professionalize the business, he said. “The truck driver cannot stay in the port for three days waiting to unload.”

João Emílio Freire Filho, a Rio de Janeiro-based consultant, believes the lack of long-term planning is the real culprit in Brazil’s transport imbroglio, forcing the industry to jump “from crisis to crisis.” In the 1980s, Geiport, then the executive group for transport policies, had five-year plans that fit into a 20-year industry, but no such long-term planning remains.

“We need to build a deal, a big deal between labor and production, between transport companies/truckers and shippers plus carriers and government, but at this present time we do not have leadership in our country, so the problems mount and the task of finding long-term solutions are always postponed,” he said. “If we don’t resolve this, this could destroy our country.”