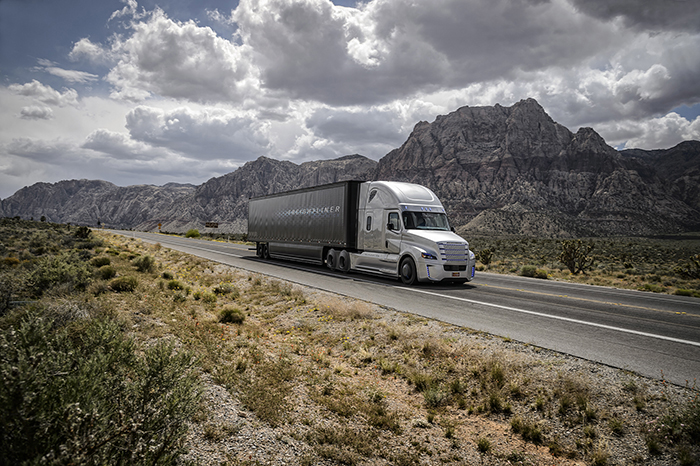 Technological hurdles are some of the smallest obstacles to the widespread deployment of autonomous trucks.

“There’s an evolution occurring from a technology standpoint that’s very real, and the pieces are coming together to create the whole,” Perry said. He referred to not just the lane-change warning systems, forward-looking radar and cameras, and automated braking systems already being sold on spec by truck manufacturers and suppliers, but also the automated transmission.

Truck makers such as Kenworth offer automated manual transmissions as an option. The adoption and integration of various safety-related systems over the next few years will create the foundation for autonomous trucks and cars, Perry said.

Perry is one of a growing number of thinkers in the transportation industry who expect autonomous vehicle technology, in concert with other technologies, especially vehicle-to-vehicle communications, will reshape the business of shipping sooner rather than later. That will have enormous implications for supply chains, shipping costs, and distribution and fulfillment.

“I used to believe we’d see this stuff in 15 to 20 years, that it would get out slowly,” Dan Murray, vice president of the American Transportation Research Institute, said at the Transportation Research Board’s annual conference in Washington, D.C., last month. Then he attended Otto’s test of an autonomous truck last October in Colorado as an independent observer.

In what may be the Kitty Hawk moment for autonomous trucks, the Uber subsidiary ran a tractor-trailer equipped with its technology 120 miles on “auto-pilot,” hauling Budweiser beer. “I drank the Kool-Aid,” Murray said. “Is the technology ready? Mostly, yes. It’s mostly financial, institutional challenges we face. But I’m moving my 15 to 20 year forecast up to maybe five.”

As the technology behind autonomous vehicles rapidly evolves, “all the assumptions we make around the way we do business today have to be looked at through a different lens,” Perry said. “I think the assumptions are all going to be challenged.” For example, if all vehicles on a highway are wirelessly, electronically connected, are speed limits still necessary?

That possibility of an interconnected network of cars and trucks may be years away, but autonomous, if not driverless, trucks are likely to be here first. The reason: safety. “On-highway injuries, accidents, and fatalities are squarely in the sites of the National Highway Traffic Safety Administration and other agencies clearing the way” for autonomous vehicles, Perry said.

In December, NHTSA proposed requiring light-duty vehicles be equipped with vehicle-to-vehicle or V2V communications technology by 2023. The Department of Transportation released its Federal Automated Vehicles Policy and guidelines for developers in September. In January 2016, the DOT announced a 10-year, $4 billion plan to accelerate vehicle automation.

“We have an unprecedented opportunity for a safety impact,” Sandra Larson, director of the systems operations bureau at the Iowa Department of Transportation, said at the TRB meeting. “NHTSA has estimated 94 percent of crashes are due in some measure to human error and choice. Eighty percent of crashes could be mitigated or eliminated” with autonomous vehicles.

There’s a difference, however, between eliminating human error and removing humans from truck cabs. Autonomous does not necessarily mean “driverless,” Perry said. “I’m not saying this technology is going to displace the truck driver, but it changes the discussion dramatically around hours of service and what role the driver plays in operating the vehicle.”

In transportation economics, “the limiting factor today is the driver,” he said. “Anything that can be done to drive efficiency and extend the hours the driver can be in the vehicle helps to address that.” Trucks with a high level of autonomy, such as Uber’s Otto offers, would change the nature of the driver’s job, as well, which Perry thinks would not be a bad thing.

“This is about making the work environment more productive and retaining the drivers we have,” he said. “There already are a lot of driverless trucks out there. They’re parked because carriers can’t find drivers. Technology like this could help us keep older drivers longer, and help us recruit new drivers because trucks are more user-friendly and the learning curve isn’t so steep.”