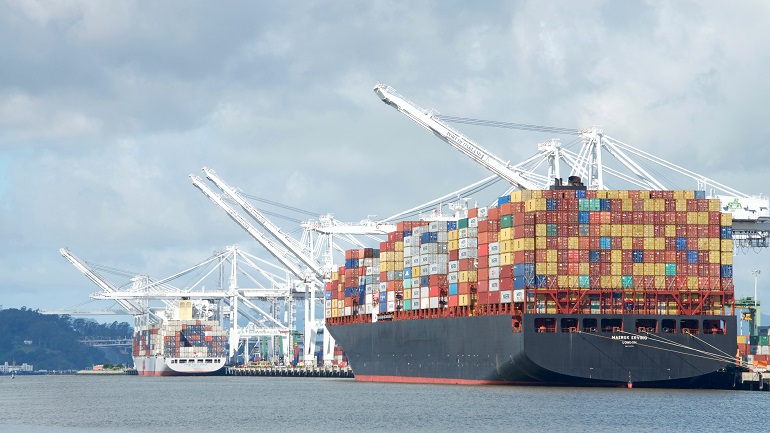 Shippers have long pushed back against index-linked contracts, due to low rates from chronic overcapacity, but the methodology at the core of Xeneta’s new index might satisfy shippers — as well as solve several business operation problems. (Above: The Port of Oakland.) Photo credit: Shutterstock.com.

Xeneta’s enabling of users to set rates based on its freight rate benchmarking database to avoid the lengthy negotiating and tendering process hinges on beneficial cargo owners embracing indices to guide rate negotiations — something many have been reticent to do for fear of tying themselves to long-term contracts that aren’t competitive.

In a market plagued by overcapacity, shippers have sensed they don’t need to be locked into multiyear, index-linked deals with carriers to get satisfactory rates.

But Xeneta is proposing a slightly different method of index-linked pricing and hopes shippers will be amenable to rates based on its deep database of crowd-sourced, contract-based rates. The index, which Xeneta announced Wednesday, also negates the need to enter in long-term contracts between shippers and ocean carriers that, to this point, haven’t stuck.

The new offering, called Xeneta Shipping Index (XSI), allows parties to base rates transparently on Xeneta’s database of more than 65 million rates supplied by users of the company’s benchmarking service.

“After several years working closely with cargo buyers and sellers, the one thing that is a clear pain point for many organizations is the inefficiency and opacity of contract negotiations,” said Xeneta CEO Patrik Berglund. “Freight rates are dynamic and prone to rapid change, so a shipper traditionally negotiating what they consider to be a fair rate for a long-term ocean freight contract can find that, three months later, they’re paying far in excess or below the actual market rates.”

“When the market is low or high, they risk shippers taking their business somewhere else or not living up to their contracts as these are not enforceable,” he said.

Xeneta’s crowd-sourced rate database is composed of contract rates from more than 700 companies, including Electrolux, Nestle, Unilever, ThyssenKrupp, Tata Steel, and Continental, and covers more than 160,000 port-to-port pairings. The company said its rates represent 95 percent of global volumes on the Asia-Europe, Europe-Asia, trans-Pacific, and trans-Atlantic lanes.

The index could be seen to be competitive with a handful of other mechanisms that have emerged in the last couple years to tackle inefficiencies in the carrier-shipper negotiation process, most notably problems with carriers rolling containers and shippers no-showing on container bookings. Among those solutions are the New York Shipping Exchange, which has developed a legally enforceable guaranteed contract platform between ocean carriers and shippers, and 300Cubits, which is trying to incent parties to abide by container bookings through the use of an associated crypto-token.

The broader endemic problem is the unenforceable nature of ocean contracts.

“If all parties looking to sign a contract agree to use the index, they can secure competitive rates over the long term, building trust and reliable relationships with one another,” Berglund said. “They can save on all the resources, guess work, and hassle associated with negotiating.”

He added that the extension of Xeneta’s capability into negotiation enablement is a natural progression from its benchmarking services.

The company said Ekornes ASA, a European luxury furniture manufacturer, is one of a few shippers already using the index (in Ekornes’ case, in conjunction with the global third-party logistics provider DB Schenker). Both companies signed up to the XSI, with a monthly rate created based on the latest freight data and an invoice generated on the last day of the month.

“The elimination of the tenders saves us internal resources costs and provides us with the possibility to allocate more full-time resources on supply chain optimization projects,” said Stian Østrem, Ekornes’ executive project manager. “We are able to improve our lead times and generate significant financial savings, compared to any short-lived procurement success through tender negotiations we had in the past.”

Index-based contracting is not a new concept, as several developers of ocean freight rate indexes have attempted to sell shippers and carriers on the merits of signing multi-year contracts tethered to indexed rates. While there has been some uptake, it has been limited, due to reticence from carriers and shippers to lock themselves into rates that may not be competitive based on supply and demand market characteristics.

Xeneta told JOC.com that the “density of our data,” along with the fact that its database is built on contract rates, makes its offering more appealing.

There’s also the issue that shippers, particularly commodities shippers with low margins, see the value of minimizing the work related to procuring and managing freight on a per shipment basis. Those shippers may well see greater value in mechanisms that reduce negotiation overhead costs.