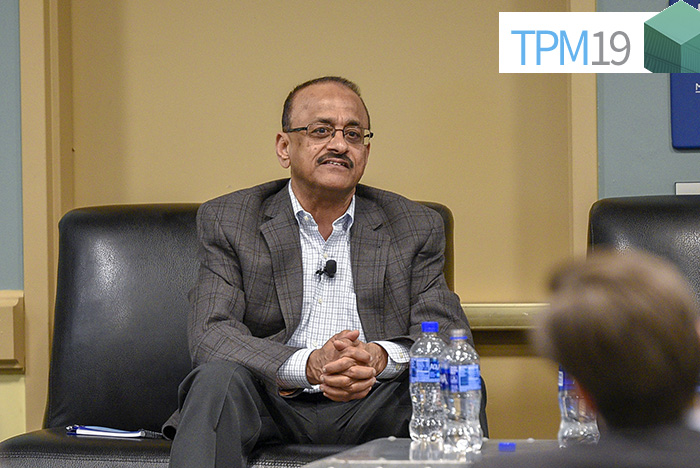 Siva Narayanan, global logistics director for Solvay Technologies, tells TPM 2019 shippers have a critical role in the effort to find ways to keep it simple, saving money in the long run. Photo credit: Caught in the Moment Photography.

LONG BEACH, California -- The transportation industry is replete with old ways to do things with the only explanation that this is how it’s always been done. Using faxes instead of digital communication, paper instead of computers, and phone checks instead of digital tracking are all examples of twentieth century practices still alive today.

True innovation is difficult to implement and slow to spread in the industry. Digital disruption has begun to creep into trucking with the likes of Uber Freight, Convoy, Loadsmart, Transfix, and Next Trucking, but picking up the phone remains the way most people conduct business in the industry.

Innovation sometimes seems like a four-letter word in transportation.

These were the themes of a 2019 TPM Conference discussion in Long Beach Monday on how technology can innovate the trucking and logistics energy.

TNX Logistics offers a software platform using artificial intelligence to best use private fleets and tender jobs under contract versus spot carriers. It’s a brain, so to speak, that builds on transportation management systems and uses algorithms to solve everyday transportation decisions.

“Trucks are moving a third of the day, and when they are moving, they statistically average 50 percent fill of the trailer,” said Jonah McIntire, co-founder of TNX Logistics. “If you can move that [up] by one-sixth, you can cut rates in half and still keep the same margins. It’s 4.5 percent of GDP that is wasted.”

Next Trucking attempts to go beyond traditional brokerage calls to find backhauls automatically for drivers. It’s also working in the drayage sector to generate more turns per day and eliminate bobtailing with dual transactions.

“We have implemented predictive load offering capabilities. We’re studying the carrier’s behavior and preferences so we can predict what they want and eliminate back-and-forth negotiations. They get to haul the loads when they want to haul at the time they want to haul them,” said Lidia Yan, CEO of Next Trucking.

The common theme among all these platforms is capacity utilization. Old methods cause too many deadhead miles, too much waste, and not enough usage of available capacity.

For shippers, eliminating some of the complexities in the old ways and replacing them with efficiencies through technology will also help their bottom lines.

“Simplicity creates value. Complexity destroys value. This is a self-defeating industry where you destroy your own value because of complexity,” Narayanan said. “You’ve got to get out of this ‘everyone has a part to play’ and say, ‘those who are not adding value, please step aside.’”

The complexity of chassis is an example, he said, that plagues truckers and costs the shippers. The trucker is responsible for getting the container and delivering it. Even if the ocean carrier is responsible for the door-to-door logistics, it is not physically driving the truck, so he believes ordering the driver to use a specific piece of equipment is a complexity, a twentieth century process that should have been left behind in 1999.

Shippers have a critical role in this effort by sniffing out what is unnecessary complexity and finding ways to keep it simple, saving money in the long run.