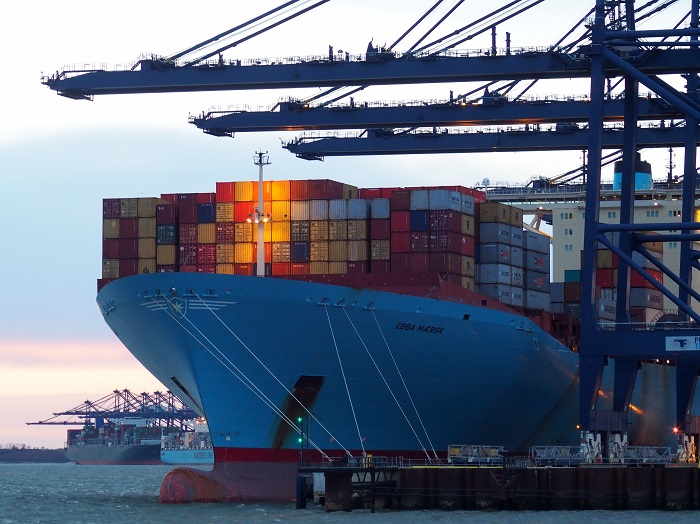 Digitalizing the forwarding business will improve efficiency and automate repetitive functions, but transporting containerized cargo across continents will always require a human touch, key industry decision makers argue. Above: A container ship at the Port of Felixstowe. Photo credit: Shutterstock.com.

Amid talk of how so-called new digital forwarders will transform and even disrupt the industry, more established forwarders are flaunting their own technology chops and are confident that they still have an edge on new entrants.

Because even as a multitude of emerging digital forwarders enter the market, their more conventional counterparts emphasize that at its core function, forwarding involves physically transporting a container from one place to another according to the needs of a customer. While the digitalization of the logistics is accepted as a game changer, its threat to legacy forwarders is being subverted as they embrace the improving visibility flowing down the supply chain and invest in-house or through acquisition to integrate vast amounts of available data.

Further, there is little sign of a siege mentality in JOC.com conversations with three traditional forwarders, one a small London-based operation that has only been trading since mid-2017, the second a large global forwarder based in Italy, and the third a German operation that is among the world’s largest logistics companies.

FSC — start up forwarder, with a traditional model

FSC Oceans is a start-up freight forwarder in the traditional model, with a few staff of forwarding industry veterans working together in a small office to manage freight transport solutions for customers brought in by a sales team. It is a privately funded company based in Fulham High Street and while the forwarder has an online presence, the website presents an outline of services offered with useful information on documentation required for international shipping.

What this startup is not is a digital forwarder. There is no online quoting and container booking interface, no rate marketplace, no big data analysis or Internet of Things. FSC Oceans is not technology free — its tech solutions are delivered through a network of technology partners — but the forwarder is primarily involved in handling ocean freight and has direct relationships with all the major carriers.

“There are not many startups in forwarding but we believe there is a real area of weakness with forwarders in general and in what they offer their customers,” said Alan Hewitt, FSC Oceans commercial director. Hewitt has been with the company since November and was with RH Freight Services in the United Kingdom for many years and then with Kuehne + Nagel after it acquired the company in 2011.

“Customers are looking for an extension of their business, not a service provider that will give them a price and no accountability. A lot of what we do is automated, but our customers still need a person at the other end of the phone. It is not just a transactional approach. We want to go in deeper because that kind of relationship doesn’t last long unless you provide value.”

Hewitt said it all came down to what the customer wanted. “You can create mystique around what the next generation will look like, but ultimately if it is not providing what a customer wants it will be a waste of resources.”

By the end of February, FSC Oceans had turned over just over $2 million, well on its way towards meeting a three-year target of $14 million.

Technology is important; the right people are very important

Operating on a far greater scale is Florence-based forwarder Savino Del Bene that in 2017 handled 560,000 TEU and 7 million tons of air freight, generating a turnover of $1.5 billion. Its executive vice president Fabio Nocentini told JOC.com that technology was an enabler, but a forwarder still needed the right people at the right place.

“You can make a booking with your laptop, but if something happens — as it always does — you need to have a supervisor taking care of the changes,” he said. “You cannot prevent a snowstorm, and a computer cannot advise you what to do if your open-top containers are caught in a storm.”

That need for a physical presence was also highlighted by DB Schenker CEO Jochen Thewes, who told JOC.com in Long Beach before giving the keynote address at TPM 2018 that online forwarders were facing challenges in developing a digitalized end-to-end process.

“It is easy to just put a pretty front end on. Yes, you can move containers from port to port, but if you want to do it globally, you need licences, access to capacity, access to sub-contractors, and you need access to infrastructure,” he said. “You need fulfilment capabilities because at some point, no matter how digital you are, something needs to physically move from A to B.”

Thewes said logistics capabilities and digital capabilities would be equally important in the future, and traditional forwarders such as DB Schenker were in a race to improve their technological ability along with the startups.

“Who will come out on top will depend on whether digital forwarders will be able to build up logistics knowhow and fulfillment capabilities faster than we can build up our digital competence and digital process execution,” he said.

According to a Freightos “state of online freight sales survey 2018," it is still in the early days for digital forwarders, which is why they cannot yet compete on capacity, price, personnel, or global coverage.

Freightos said that between Flexport, FreightHub, iContainers, Instafreight, Kontainers, Twill Logistics, and ZenCargo, only two had the required coverage while none could provide an instant door-to-door quote.

“However, the integration of quoting, shipment management, and chat in their customer interface means that those small business customers who switch will get a superior customer experience. Top forwarders should be wary of this key competitive advantage,” Freightos noted.

Humility required because supply chains are still in 1993

Also with an understanding that tech-based forwarders still have some way to go in capturing a greater share of the market is Sanne Manders, chief operating officer of online forwarder Flexport. Manders is not a fan of the term “disruption” when it is applied to supply chain technology. “Why don’t I like the term disruption? There’s a lot to do between where we are now and where we want to be,” he said.

“Supply chains don’t live in 2018, they live in 1993. So we have to be humble and start by doing something a little bit better. That’s not disruptive, it’s kind of an evolution," Manders said. "Venture capital and technology can accelerate that evolution. There’s a lot of value to be created. There’s a lot of paperwork, a lot of unstructured data. Customers are unhappy because they lack visibility. But this is not a disruption, this is an evolution. We hope we can accelerate the evolution a little bit.”

Still, there is no escaping the human aspect of transporting cargo inside containers around the world, a conclusion that was also reached by by Dan Gardner, president of Trade Facilitators, Inc. In a commentary in JOC.com he said the greatest challenge faced by digital forwarders was the most obvious one: an over-reliance on digital forwarding.

“Whereas automation has a definite appeal, the moment something goes wrong with a shipment, technology goes out the window and people revert to that most analog of activities, speaking directly to another human,” he said.

“Clearly, there isn’t a logistics professional on the planet that is going to rely solely on what a website is telling them about a rolled container or a rejected automated export system submission. When things go awry, shippers want to talk to another human, and the person on the other end of the line better know what they’re talking about.”