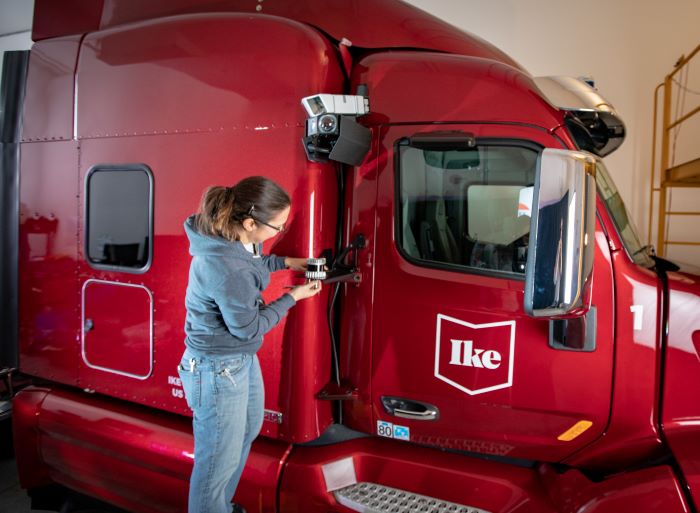 Autonomous or automated trucks may be “inevitable,” but that doesn’t mean they’ll be rolling down the highway anytime soon. Alden Woodrow, co-founder and CEO of Ike, doesn’t expect driverless trucks to be common on US highways for many years, “maybe more than a decade.”

That’s an unusual position, perhaps, for the head of a company designing automated trucks to take. But Woodrow has an unusual perspective. He’s the former group product manager for self-driving trucks at Uber, and he also worked at Google.

His co-founders, Jur van den Berg and Nancy Sun, also worked at Uber and Ottomotto, the automated truck company Uber acquired in 2016, as well as Apple. “We feel we have a pretty good perspective on the history of the autonomous truck, having been a part of it,” he said.

The drive to develop autonomous or automated trucks -- Ike prefers the term "automated" and there is a distinction -- has entered a new phase that is less about technology and driverless trucks and more about the business of trucking, Woodrow said in an interview.

The end of the first phase could be marked by the departure of Uber from the autonomous trucking market.

“The first wave was the early excitement about taking the driver out of the vehicle and improving safety. As a group, we didn’t really understand the full challenge and complexity of the problem to be solved,” he said. “I think in this case, Silicon Valley failed.”

Autonomous trucks still draw investor money, though. In February, Ike received $52 million in a Series A funding round led by Bain Capital. “Investors are willing to make big bets in Silicon Valley when the opportunity is really big,” Woodrow said.

Ike is emphasizing nitty-gritty design, simulation, and testing that aims to automate vehicles, rather than allow them to operate "autonomously" in all situations.

"We are not building technology that allows a truck to back up to a dock, navigate an industrial site, or turn right at a stop sign," he said. "We want a truck without a driver just on the Interstate Highway System. We think that is a much simpler product and problem to solve than the more magical truck that can go everywhere and do everything."

The focus is on in-house development rather than over-the-road demonstration products such as Uber’s 2016 autonomous Budweiser beer run in Colorado, which is still considered a Kitty Hawk-like moment for autonomous truck technology.

The company is named for the 34th president of the United States, Dwight Eisenhower, who not only introduced the US Interstate Highway System, but took part in a 1919 military convoy that took 81 trucks from Washington, DC, to San Francisco, testing not just the equipment but the nation's largely undeveloped infrastructure.

Despite a decade’s worth of work on autonomous technology, “our expectation is that a repeatable, reliable, scalable truck product is still several years away,” Woodrow said. “Reaching a landscape scale, with tens of thousands of trucks, that’s going to take years.”

Automated truck designers, he said, are “moving away from pure excitement about the technology and start thinking about the problems that need to be solved and the people who will be affected,” who are primarily truck drivers whose jobs, he believes, will change, not vanish.

“In the public narrative today, the robots are coming for your jobs, and automation will put two million drivers out of work,” he said. “That’s not what we’re about. That’s not what’s going to happen. Technology should be a partner to the person, rather than a competitor.”

Automation won’t eliminate truck driving, but it will change the trucker’s job, he said. “If we’re successful, there will be automated trucks on the highway. That doesn’t mean the driving jobs go away. Truckers will continue to drive local hauls, and that could be good for drivers.”

That’s a model Uber was testing before it decided to close its autonomous truck unit and focus on driverless cars. It’s basically a modern take on the original railroad freight depot and delivery truck network of the nineteenth century, only replacing steam locomotives with twenty-first century trucks.

Competing visions of how autonomous or automated trucking will hit the road divide the technology community, with some, such as Ike, focusing on developing long-haul business models, with others pursuing more “closed loop” operations based on defined short-haul routes.

If the transfer hub model Woodrow and others are advancing takes hold, it will transform a job done by one end-to-end solo driver to a job with two pickup and delivery drivers at the end of a long linehaul. There would be more demand for local drivers, rather than fewer total jobs.

There could also be more congestion and more opportunity for missed connections if, say, a driver is delayed by that congestion on his way to a transfer hub to pick up a load. That, in effect, could keep an expensive automated truck waiting hours to be decoupled from a trailer.

Those are the types of issues that could emerge, and would have to be resolved, in a more automated world. But Woodrow also sees the automated truck not as an end in itself, but as an end result and of the drive toward process automation across industries.

Automated trucking needs to be seen as a part of a process, not simply a shiny new product, and trucking processes will need to change to accommodate those automated vehicles. The more efficient the process of moving freight by truck, the more successful automation will be.

“What if, because of automation, your utilization clock is no longer set at 11 hours [the daily US truck-driving time limit], but 24 hours?” Woodrow said. “If you can double the utilization of the truck through automation, that’s a massive change in the productivity of the whole system.”

In fact, that’s the kind of change that finally tipped the scales in favor of the motor truck over the horse wagon, just about a century ago. Using motor trucks, shippers could double or triple the distance they had been distributing goods with horses, in the same amount of time.

Getting there will be a step-by-step journey, however, and will require focus on each individual step. Ike is taking what Woodrow called a process-based approach. “We’re going to develop requirements and build to them, and evaluate the technology based on those requirements.”

Validation of the technology is key to its eventual acceptance, said Woodrow. “There are temptations to take shortcuts and rely on brute force to solve problems,” he said. “As if just putting lots and lots of vehicles out there and driving them around will help you develop technology faster.”

Emphasizing vehicle miles “actually slows you down and creates complexities from having to operate vehicles,” he said. “At this stage, our system is a prototype, and that’s true for everyone. It’s risky to be scaling up lots of prototypes driving around when something’s still not proven.”

In addition, a Class 8 tractor is not a Toyota Prius. “You can plug a computer into a Prius and control it in a pretty seamless way,” Woodrow said. “That’s not true of a Class 8 truck. You don’t have all the [automated] components and our roadmap is measured in years because of this.”

“It’s one thing to prove the functionality of a product and another to prove it can work consistently and reliably, he said. “The hard part is not building the door, it’s opening and closing the door thousands of times, and figuring out where the door fails.”