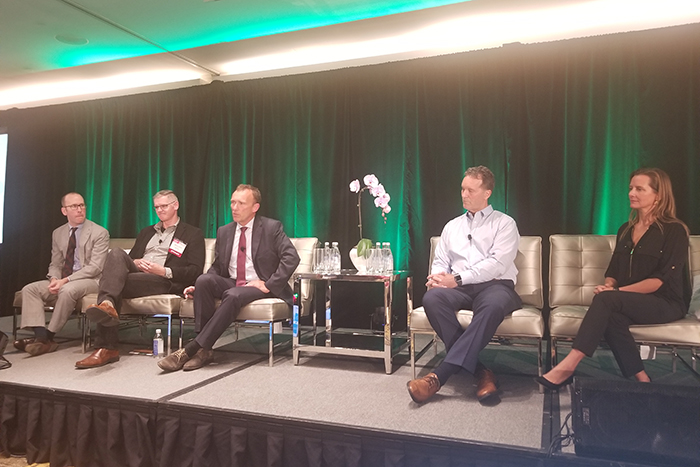 TORONTO — Shippers are willing to make the leap on freight visibility products if the return on investment is apparent, software vendors said this week on a panel about advancements in predictive visibility at the 2019 JOC Canada Trade conference in Toronto.

While those investments are tied to value, the value must be shared in such a way that carriers and third-party logistics providers (3PLs), which shippers depend on, also see benefits from participating.

Larger carriers and intermodal operators are better equipped than their smaller peers to absorb the cost of providing visibility to their customers, Hilary Garner, president of Toronto-based 3PL and logistics consultant Garner Enterprises, said at the conference.

“When you’re talking about a smaller over-the-road operation, they’re having a real struggle passing on the cost of visibility,” she said. “I’ve got one company that’s playing with more than 40 portals that they’re entering information in, so their rates have to go up 5 to 10 percent to handle the administration piece of that. And for them to pass that on to their clients is next to impossible.”

“There needs to be more sharing here because these drivers are coming to the receiver, and maybe they’re a half hour early for that appointment,” she added. “They’re uploading that information right away. And that may cost them 5 to 10 percent more in admin costs, and then the driver sits there for three-and-a-half hours wondering, ‘Wait a minute, we’re being transparent, we used your portal, we’ve done our job. Where is the reciprocity on this?’”

Garner said asymmetry in benefits is tied to the “amazing products out there,” but that service providers need to share in the value or invest in their own software.

“[Investing in its own visibility solution] opened up hundreds of millions of dollars of capital for one of my intermodal clients, because it started to identify so many uncharacteristic behaviors that it allowed them to reconfigure how their fleet was being managed and not reinvest in any more assets,” she said. “So for them, the opportunity the software provided was exponential compared to what they thought the investment was at the initiation point.”

The ideal situation, however, is where one platform benefits multiple parties, not where each party invests in its own optimal solution. “Without that mutual transparency, it’s extraordinarily difficult for this to be something that people really want to invest in,” Garner said.

“The shipper is the sole decider,” he said. “Cost is obviously a big concern, but they’re willing to invest when they can see a return on investment. And visibility is opening up doors for them. We have five different user groups in any company, from customer service reps to logistics to risk. They want to know, ‘Can I know of a problem? How can I fix it?’ and then be notified of it being resolved, and in real time. And that to them, is worth investing in.”

Jacques Delort, general manager of Traxens, a Marseille-based provider of container sensors and associated analytics, said there will be a point in the near future when the assumption is that all logistics assets will be trackable.

“When this becomes a commodity, the discussion of cost will disappear,” Delort said. “That doesn’t mean it will come for free, but the value generated for the entire business will be such that there will be no question for anybody to equip — until BCOs get used to the service and it becomes a commodity. That’s the second phase, where everyone sees it as a prerequisite, same as in the reefer world. Those that are not equipped will be out of the game. And the value generated will be shared across the parties. But that’s a few years down the road.”

Traxens has landed three of the big European liner carriers — Maersk, CMA CGM, and Mediterranean Shipping Co. — as customers in the last nine months, with MSC and CMA CGM also investing in the company. He said Traxens operates under a “triangular business model,” which involves Traxens, the shipping lines, and the beneficial cargo owner (BCO). The carriers order the devices to outfit their containers with tracking capability, then Traxens trains carrier staff to equip the containers on demand and provides the data from the device to the BCO or some other third party that’s getting the value.

“Today, you equip on demand, because the cost to equip the entire fleet is too high,” Delort said. “For the BCO, booking a smart container is the same process as booking a normal container. And then we charge the BCO a specific fee and we share the fee with the shipping line.

“The idea is over three years, we offset the cost of this logistics subscription,” he added. “We work with the shipping company’s marketing people to make sure we make reasonable assumptions around the cost, the price, the asset utilization. What is the probability the container will be reused [thus avoiding the need to equip on demand another container]? This is very low today, but it will increase over time as you get more critical mass.”

Similar providers on the domestic and intermodal side believe it will soon be impossible for carriers to ignore the need to track every asset. Some of that tracking is accomplished through the federally mandated deployment of electronic logging devices (ELD) on every truck in the United States (a mandate due to come to Canadian drivers in the coming year). But sensors can give more specificity around non-location data, such as the condition of assets or cargo.

“There are still a lot of carriers out there that have not invested in visibility and asset tracking, and part of that is there has to be ROI,” said Christopher Plaat, senior vice president and general manager of Toronto-based Blackberry Radar, which provides asset utilization hardware and software. “The other part of that is, you don’t know what you don’t know until you get some visibility into your fleet. You don’t know that a third party is taking your chassis and using it for their personal use, or your truck’s now outside of your service area, or your trailer is being used by a third party. And you don’t know that until you have some visibility into your fleet. But to get to that point of what you don’t know, you have to have a hard ROI. There’s very strong hard ROI for asset tracking — from utilization to customer service. And there’s a lot more that isn’t on the surface.”

Plaat said company size will dictate the way this data is ingested. “A smaller fleet can use a portal to get visibility to their assets, a 500-truck fleet has a sophisticated [transportation management system] and they just want [application programming interface] data integrated into their TMS, while an enterprise carrier will have a legacy system where they’re going to need to have sophisticated IT service projects around, bringing in data from disparate sources to get visibility to the right user at the right time,” he said. “So there’s a very different use case based on the size of the fleet.”

Overhaul’s platform uses a data- and device-agnostic approach to give shippers real-time insights into the location and condition of their goods. So, theoretically, his system might pull data from the Blackberry Radar and Traxens devices, among other sources of data, and feed it to a shipper. In 2005, Conlon supplied the industry with tracking hardware via a previous venture but found the obsolescence rate of devices to be untenable, and so began developing a platform that would pull in data from various sources.

“When you’re a shipper, you’re trying to get this full, unified view, and there’s four common points: tractor, trailer, driver, and cargo. And they’re all trackable. But the constant change in the technology is your problem,” he said. “Our technology sits along an [enterprise resource planning system], so it goes in and out of the network. It basically brings all the parts of the supply chain together alongside the rules you as a shipper have put together. So it’s about what you want that data to tell you.”

Traxens has focused on merging the hardware and software because, as Delort puts it, “all these visibility platforms, they only give what they are fed with. Some of it may be erroneous or missing because it was manually keyed in. For me, it’s important to engage the asset owners, the shipping lines, to the point where the entire fleet, it becomes a standing process, that anytime, anywhere, [the cargo owner knows] what’s happening and whether there’s an issue.”