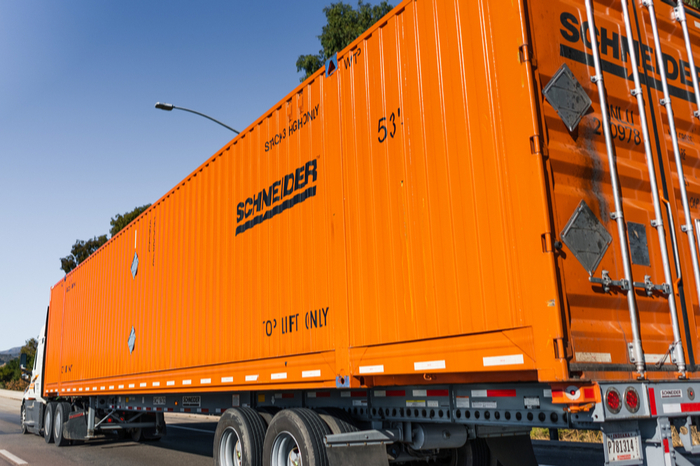 Industry appetite for end-to-end visibility has steadily grown in the last decade as solutions attempting to achieve such transparency mature, but the reality is that no single provider has internal access to all the data needed to build that picture for shippers.

Most companies use a mix of proprietary data and private, external data procured through strategic partnerships or purchase agreements. Even then, most visibility capability is confined to freight visibility — i.e., goods in transit — rather than the supply chain visibility that shippers say they want. That would include real-time insight far upstream to production and pre-production phases of the supply chain through to final-mile connectivity.

Freight visibility software provider Overhaul has been focusing on how supply chain visibility can mitigate risk since its founding in 2016, and this week the Austin-based company formed a partnership with the truckload brokerage arm of Green Bay, Wisconsin-based Schneider National.

The deal will enable shipper customers of Schneider’s brokerage division, Schneider Transportation Management, to access Overhaul’s freight monitoring capability, which centers around alerts when a shipment is disrupted. Although that capability has particular relevance now as shippers deal with COVID-19-related disruptions, Overhaul’s lure is in the more systemic risk shippers face.

Overhaul’s business model is to pull data from public and proprietary sources to help shippers assess where potential shipment deviations occur. The company takes a data-agnostic approach to solving that issue, leveraging hardware investments from sensor, internet of things (IoT), and telematics makers.

The chief value for the company’s solution has been to proactively identify cargo theft risk, with Overhaul setting up direct connections with law enforcement agencies to alert them of potential issues. Users access data via a subscription-based online platform with customizable dashboards and analytics based on the characteristics of their shipments and specific risks.

“It was through these engagements Schneider’s brokerage team truly embraced the command and control capability of our platform and value we could offer their team as well as their broader customer base in providing real-time data and automated corrective action,” she said.

Stevens said one particular area of focus between the two companies is meeting the needs of high-value shippers to give the broker access to a “premium customer.”

“High-value shippers in the high-tech and pharma industries are looking for ways to cut costs without impacting quality in their supply chain,” Stevens said.

Schneider will use the alerts to manage a broader range of events beyond theft on its brokered freight “ahead of them becoming an issue,” Erin Van Zeeland, Schneider senior vice president and general manager of logistics, said in a statement.

The partnership with Schneider is Overhaul’s first major initiative since it landed a $17.5 million investment in mid-March from a group of investors, led by Princeton, New Jersey-based Edison Partners. Overhaul said in March it plans to use the investment to achieve “aggressive growth goals” in 2020. That includes broadening its product offerings, increasing its headcount in North America and in its new European headquarters in Ireland, and expanding into other global markets.

Overhaul and its investors are banking that a platform that sits atop all available sources of data will prove most valuable to cargo owners.

“True supply chain visibility is non-existent for most global businesses,” said Ryan Ziegler, general partner of Edison Partners and head of the firm’s Enterprise Solutions practice. “Overhaul’s device and data-agnostic solution approach generates the actionable oversight and real-time data that global companies need to gain a competitive advantage, along with the ability to mitigate risk and significantly reduce costs.”