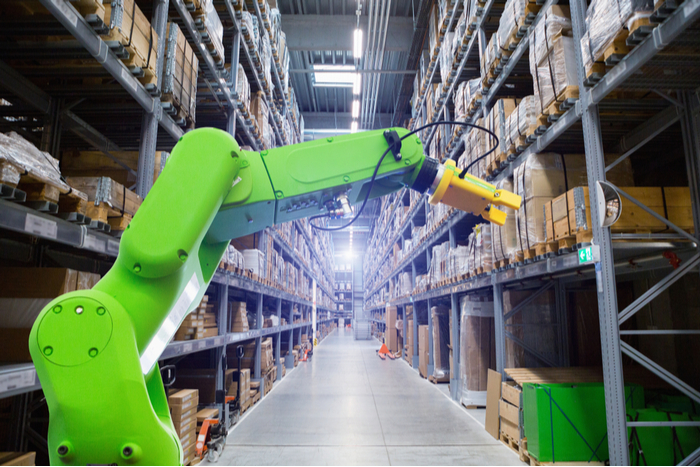 Rising demand for e-commerce is driving warehouse operators and contract logistics providers to invest in robotics, but those systems have traditionally been "walled gardens." Photo credit: Shutterstock.com.

While application programming interfaces (APIs) are playing an increasing role in connecting systems in the logistics industry, that largely below-the-surface trend belies how fundamentally APIs are changing the way companies interact with one another.

Consider the emergence of SVT Robotics, a Norfolk, Virginia-based logistics software company that this week announced a $3.5 million seed funding round from venture capital investors.

AK Schultz, CEO of the startup, told JOC.com he views his business as the “MuleSoft for warehouse robotics.” Mulesoft was a widely used enterprise API hub that connected a range of business applications that was acquired by Salesforce in 2018. SVT focuses more narrowly on an API-based hub for shippers and contract logistics providers to connect to whatever warehouse robotics platform they might need to use.

The key to SVT’s business model, according to Schultz, is providing an interoperability platform that reduces the cost, complexity, and time frame for connecting with the range of robotics systems in use in warehouses. For example, instead of setting up specific connections with five robotics systems in five different facilities, a contract logistics provider managing those facilities could connect to SVT, which would give it built-in access to all those different systems.

In technology terms, SVT’s product is considered “middleware,” in that it provides an abstraction layer between systems and users. A more tangible analogy would be to consider it like a power adapter that changes the plug point and current for different countries.

Salesforce acquired MuleSoft for precisely this reason. Middleware had become an essential part of enterprise software, and Salesforce understood that it needed a hub to connect to the myriad third-party applications that sit adjacent to its core product.

The product category is also often now referred to as integration-platform-as-a-service (iPaaS), systems that, on a subscription basis, handle the heavy lifting of connecting existing and emerging systems. In the logistics industry, visibility provider project44 initially set out to provide such a platform for shippers to connect directly with carriers and brokers without having to set up individual electronic data interchange (EDI) connections for each relationship.

That market has become more crowded in recent years, with longer-term players such as Banyan Technology on the domestic freight side and Youredi on the international freight side being joined by integration specialists such as Chain.io. Third-party logistics provider Redwood Logistics in late 2019 also released a platform service independent of its freight business to help shippers with system connectivity.

APIs are at the heart of the movement, as they allow data to be leveraged by multiple systems more easily, enabling companies to use niche, browser-based solutions and integrate them in a way that wasn’t cost-effective even five years ago.

The integration of warehouse robotics systems with broader logistics tools such as warehouse management systems (WMSs) and transportation management systems (TMSs) has taken on more urgency over the years as more distribution facilities have implemented automation software. Uptake of in-warehouse robotics is being driven by rapid e-commerce growth, with direct-to-retailer and direct-to-consumer manufacturers needing to meet ever-tighter delivery windows.

Using robotics allows those companies to scale their operations, but Schultz said the environment has been beset by “walled gardens,” referring to makers of robotics hardware that have set up siloed systems within individual facilities.

But contract logistics providers and shippers need to be able to juggle existing robotic infrastructure and preferred systems that new customers may want. That places a premium on more quickly integrating those systems in a way that doesn’t require additional human resources to manage them, he said.

Schwartz added that a newer driver for SVT is the growth — although small relative to the broader contract logistics market — of on-demand warehousing systems, such as Flexe and Stord, which allow shippers to use unoccupied warehouse space for short periods of time to manage seasonal spikes in demand, or disruptive periods such as the COVID-19 pandemic.

Because some of those temporary users may want robotic systems as part of their short-term contracts, it’s important that contract logistics providers using those on-demand systems have the ability to quickly connect to a variety of systems, as well as the ability to turn those connections on and off.

SVT’s funding round announced this week was led by San Francisco-based Cowboy Ventures, with participation from supply chain-focused VCs Dynamo Ventures and Schematic Ventures, among others.