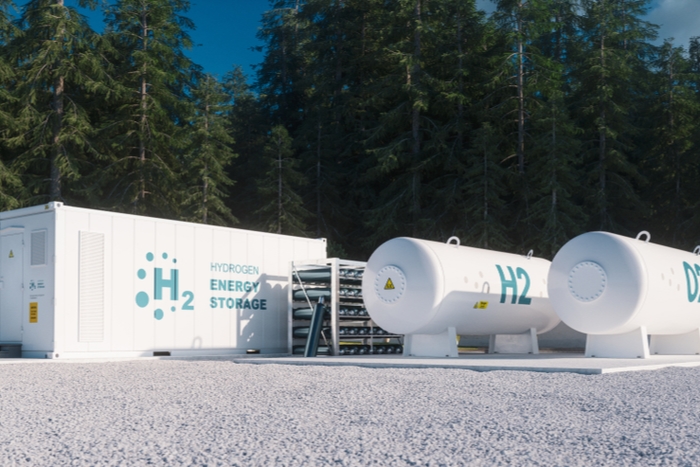 Hydrogen fuel cells are already powering smaller vessels and port machinery, but R&D is making progress in testing whether the carbon neutral option is viable at scale as an alternative to fossil fuels. Photo credit: Shutterstock.com.

Some of the latest research and innovation in the search for a zero-carbon fuel of the future is concentrated on developing hydrogen fuel cell systems capable of powering both road and maritime transport.

The urgency of developing such a carbon-neutral fuel source that will enable the transport sector to meet tough European emissions targets has not diminished, even though global trade is currently on pause to deal with the coronavirus disease 2019 (COVID-19).

In the road sector, the Volvo Group and Daimler Truck have formed a joint venture for the large-scale production of fuel cells to drive heavy-duty vehicles, while in ocean shipping, technology group ABB and hydrogen specialist Hydrogène de France are developing fuel cell power plants for marine applications.

Shipping is responsible for about 2.5 percent of the world’s total greenhouse gas (GHG) emissions and there is growing pressure for the maritime industry to transition to more sustainable power sources. It is widely accepted that meeting the International Maritime Organization (IMO) target of cutting annual emissions by at least 50 percent by 2050 from 2008 levels will only be possible if shipping can develop a viable non-carbon-based fuel — and engines capable of running on that fuel.

With this goal in mind, ocean carriers, shippers, and research groups are conducting research into several new fuel types. CMA CGM in December 2019 entered into a deal with Shell to secure tens of thousands of tons of used cooking oil to be used in biofuel pilot tests. In October 2019, Maersk Line and Wallenius Wilhelmsen teamed up with Copenhagen University and some of their largest customers — BMW Group, H&M Group, Levi Strauss & Co., and Marks & Spencer — to explore whether LEO, a blend of lignin and ethanol, could serve as a viable zero-carbon bunker. Mediterranean Shipping Co. has also conducted pilot biofuel sailings.

While the complications of deploying hydrogen fuel cells at scale across the global maritime industry are significant, executives involved in the Volvo-Daimler joint venture believe trucking is better placed to make a switch from fossil fuel to the carbon-neutral option.

“For trucks to cope with heavy loads and long distances, fuel cells are one important answer and a technology where Daimler has built up significant expertise through its Mercedes-Benz fuel cell unit over the last two decades,” Martin Daum, chairman of Daimler Truck, said in a statement.

Martin Lundstedt, Volvo Group president and CEO, was equally confident. “Using hydrogen as a carrier of green electricity to power electric trucks in long-haul operations is one important part of the puzzle, and a complement to battery electric vehicles and renewable fuels,” he said.

In its road transport application, a hydrogen fuel cell converts the chemical energy of the fuel, in this case hydrogen, and oxygen in the air into electricity. The electricity powers electrical motors that propel electrical vehicles. There are two main ways to produce the hydrogen needed: green hydrogen can be produced locally at a gas station, using electricity to convert water into hydrogen, and blue hydrogen is derived from natural gas, using carbon capture technology to create a carbon neutral fuel.

Daimler will consolidate all its current fuel cell development activities within the joint venture, while the Volvo Group will invest 600 million euro ($650 million) for a 50 percent share, although the two companies will continue to compete in all other areas.

“By forming this joint venture, we are clearly showing that we believe in hydrogen fuel cells for commercial vehicles,” said Lundstedt. “But for this vision to become reality, other companies and institutions also need to support and contribute to this development, not least in order to establish the fuel infrastructure needed.”

Lundstedt said joining forces decreases development costs for both companies and accelerates the market introduction of fuel cell systems in products used for heavy-duty transport and its demanding long-haul applications. He noted that in the context of the current coronavirus-driven economic downturn, cooperation has become even more necessary in order to meet objectives set by Europe’s “Green Deal” environmental strategy, which was approved in January and became part of a wider European Climate Law in March, within a feasible time frame.

In a recent report by the American Bureau of Shipping (ABS), titled “Setting the Course to Low Carbon Shipping,” the classification society explained that fuel-cell technology has been implemented in commercial products such as forklifts and vehicles, naval submarines, commercial ferries, and offshore support vessels. It is also being deployed as fuel cell power systems for cruise ships, while other marine applications are in the planning stages.

However, the ABS report noted that fuel cells are currently more expensive than competing power generation technologies, and depending on the type of fuel cell, exotic materials are often used as catalysts. These could increase unit costs by 10 times on average, compared with an equivalent internal combustion engine.

“For many of the fuel cell technologies, hydrogen is a preferred fuel, which can be extracted from light gaseous and liquid fuels,” ABS wrote in the report. “The availability of such fuels, storage challenges, and bunkering infrastructure poses many challenges to the uptake of fuel cells. Additionally, the alternative fuels required by some fuel cells raise concerns related to the safety hazards of handling gas.”