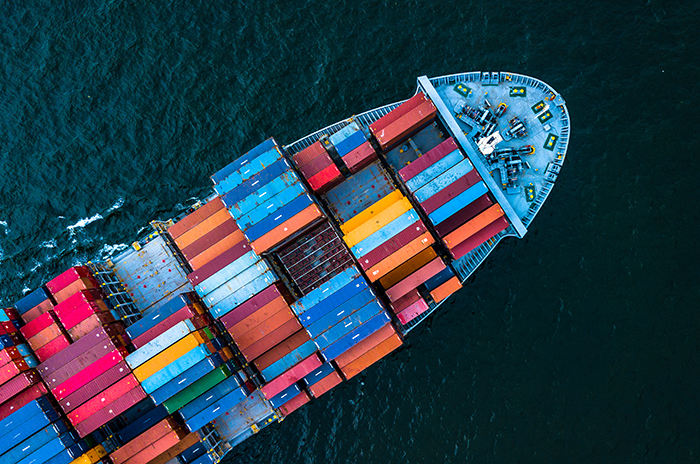 TradeLens is designed to enable trust between trading partners and supply chain stakeholders by allowing them to exchange trade and freight documentation in a blockchain environment. Photo credit: Shutterstock.com.

Ocean carrier Zim Integrated Shipping Services has joined the IBM- and Maersk-led blockchain platform TradeLens, a key step toward TradeLens reaching critical mass in a broader shipping industry that has been skeptical of both the concept of blockchain and also Maersk’s role in developing such a platform.

In joining, Zim becomes the third independent carrier, and fourth overall, to formally sign on as a member, after Maersk, Singapore-based Pacific International Lines (PIL), and Miami-based Seaboard Marine. And sources tell JOC.com other European carriers are soon poised to join TradeLens as well.

TradeLens is designed to enable trust between trading partners — from liner carriers to freight forwarders, customs officials, terminal operators, port authorities, and shippers — by allowing them to exchange trade and freight documentation in a blockchain environment. Blockchain is a type of database that is more securely encrypted than standard versions, which allows parties to maintain a firmer audit trail and see more clearly when data have been tampered with.

TradeLens is a “permissioned” blockchain, meaning participants need to be granted access to the platform. While some blockchain advocates believe a “public” blockchain, where participants don’t need permission to participate, is the truest expression of the technology, it’s generally agreed that logistics processes need to be handled within permissioned blockchains due to the sensitive — and often confidential — nature of the data.

Landing Zim as a member is a sign of progress for IBM and Maersk. TradeLens officials last autumn said that getting rival carriers on board was a requirement for the platform to achieve its promise. “We do need to get the other carriers on the platform. Without that network, we don’t have a product,” Marvin Erdly, the IBM lead for TradeLens, told the blockchain-focused publication CoinDesk in October.

Since its inception, the question for TradeLens has been whether other carriers would be willing to share data with a competitor — and not just any competitor, but the largest ocean carrier in the world — without receiving a stake in the business in exchange. But perhaps the more pertinent question, in light of recent interest from carriers, is the extent to which they will use TradeLens as a mechanism to wrest control of their data from third-party providers.

In that scenario, TradeLens would become the vehicle for carriers to provide data to the industry, as well as collect data from relevant parties. JOC.com has learned that some carriers feel that control over data is long overdue, with carriers having long ago farmed out the provision of data, such as container status messages, to third-party software vendors (most notably GT Nexus and INTTRA) that have reaped the rewards of gathering, vetting, and synthesizing that data in order to provide them to shippers and freight forwarders in a digestible format.

The news of other carriers joining TradeLens can also be viewed through the prism of yesterday’s launch of the Digital Container Shipping Association (DCSA), an agreement by four top ocean carriers to drive data standards in liner shipping. Although the DCSA is not centered on blockchain standards, it could focus on such standards if the technology gains traction.

Whether TradeLens, and blockchain more broadly, is ultimately the mechanism for that to happen is unclear. The platform would need to eventually drive revenue to be self-sustaining, and it’s not certain that shippers and forwarders would be willing to shoulder that burden, especially if they see it as a carrier-led endeavor meant to be monetized. It's also not the only carrier-backed blockchain consortium, with a CargoSmart-led initiative, called the Global Shipping Business Network, emerging in autumn.

There’s also the issue of newer visibility-focused software providers that have actively called on carriers to be more open in sharing data, as opposed to restricting it through a permissioned blockchain. Those software vendors argue that shippers want a neutral view of data across carriers and logistics services providers, not a carrier-led platform. Perhaps there is room for both approaches, if TradeLens reaches the critical mass it envisions.

The data transacted through TradeLens are today typically transmitted via either email or online portals. TradeLens purports to provide its ecosystem members with a single, shared, real-time view of a transaction without compromising privacy or confidentiality.

INTTRA is an interesting historical comparison for TradeLens’ growth. The software provider, acquired in autumn 2018 by supply chain planning technology company E2open, was initially created by a cadre of European carriers to develop an online ocean freight booking platform. The company eventually shed carrier control to become a neutral network but struggled for years to shake the perception it was still a carrier-backed entity.

For TradeLens, it’s a double-edged sword. The platform needs carriers to sign on to avoid being seen as a purely Maersk-led endeavor, but the more that join (especially if it's some of the same European carriers that founded INTTRA), the more it will be perceived as a reincarnation of INTTRA — i.e., a carrier-owned platform that ultimately benefits the carriers.

Zim joining TradeLens, meanwhile, follows a couple weeks after Livingston International, a Canada-based customs broker and trade compliance software provider, said it is working with TradeLens on a pilot for brokerage automation with the Canada Border Services Agency (CBSA), Canada’s counterpart to US Customs and Border Protection.

“Livingston’s role in the pilot will be to enter and access information on shipments and streamline internal procedures without compromising accuracy or security,” the company said in an April 3 statement. “The CBSA is participating in the TradeLens pilot to determine what role the platform could play in its business processes.”

Mike White, TradeLens leader for Maersk, said TradeLens allows carriers “to maintain their competitive advantages. The more carriers and other ecosystem members that join the platform, the closer we come to bringing about a new era in global trade.”

According to the company, TradeLens currently has 60 network members and 100 total ecosystem members, the majority of which are port authorities, terminal operators, and customs authorities.