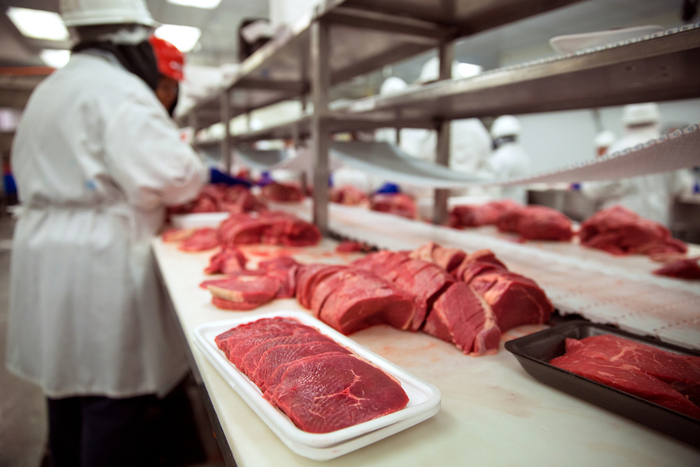 Transship and its partners aim to speed the processing of perishables exports, including meats. Photo credit: Shutterstock.com.

When Amit Hasak looks at the global cold supply chain, he sees enormous inefficiencies, as well as enormous opportunities. The former Chicago cold storage warehouse owner is betting that logistics technology, including blockchain and application programming interfaces (APIs), can solve the specific transportation problems faced by exporters of containerized perishables.

“Transship is the mothership,” Hasak told JOC.com. “But the sum of the parts in this partnership is greater than the parts alone. The companies all have value individually, but being part of a bigger solution helps their value as well, so everybody gains.”

Transship will begin pilot testing this month and expects to launch its services within the first quarter, Hasak said.

Initially the service will be modeled on “door-to-port” exports, meaning Future Tech Transport will pick up a container, haul it to a port, and TradeLens will handle the ocean shipping side of the transaction.  Eventually, Hasak wants Transship to offer door-to-door export and import services, which will mean adding new partners.

Communications and tracking issues are legion in global supply chains, but risks are higher than normal when it comes to moving perishables. Exporters say they are looking for improved, consistent service from carriers, ports, temperature-controlled storage providers, and other cold chain partners. Hasak is betting his experience with perishables will help provide that.

Transship wants to fill the “black holes” where perishables shipments not only can get lost, but go bad, leading to the spoiling of valuable meat, produce, or other products.

“What I want to do is automate the whole process,” said Hasak, who in the 1990s joined the cold storage business in Chicago his father founded in 1966. “The way it’s being done today is the way it’s been done for decades. There’s numerous calls, emails, even faxed documents. It’s an obsolete industry that’s never had anyone really push the envelope.”

Hasak is building a system for exporters from the bottom up. “We’re going to be cutting down the time to process a shipment from four to five days to 15 to 20 minutes,” he said. “We’ll provide our customers with an instant quote. We’ll provide transparency and visibility, and we’re going to reduce the cost, because we’re relying more on automation.”

Hasak expects margins for Transship transactions to range in the 3 to 5 percent range, as opposed to double-digit margins he said many freight forwarders collect “because they can.”

Hasak founded Transship in 2017 with $200,000 in seed money, according to Crunchbase, partnering with consultant Lily Gulik, who became Transship’s co-founder and chief technology officer. He joined 1871, Chicago’s technology incubator, and attended accelerator “boot camps.” “You don’t have to be in Silicon Valley to have a successful startup,” Hasak said.