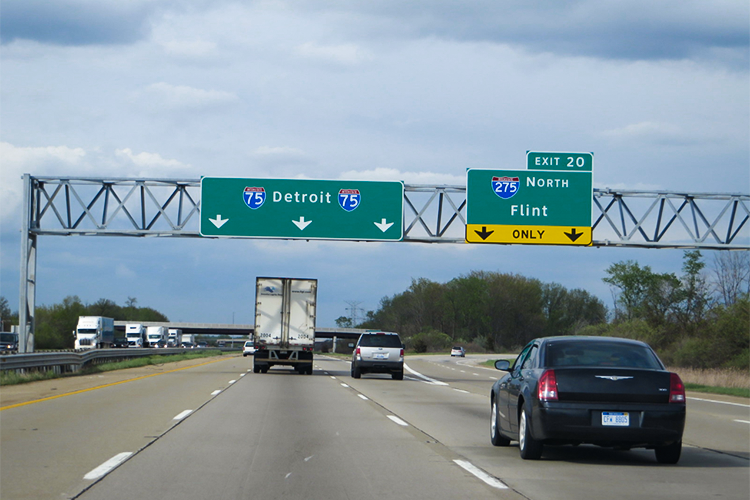 Digital brokers are navigating a topsy-turvy freight market, which makes it very difficult to anticipate how much it will cost to purchase a truck in two or three weeks. Photo credit: Ken Lund/Flickr.

Any semblance of predictability in the US surface freight market over the next three weeks is so scant among freight brokers that they’re quoting rates more than 15 percent higher than prior to the coronavirus disease 2019 (COVID-19) spreading to the US.

Four truck brokers, all of which provide instant digital quotes, have raised rates through March 25 compared with February, according to a JOC.com analysis of 115 US lanes. The review includes markets such as Los Angeles, Seattle, and Elizabeth, New Jersey, all of which have been hit hard by the COVID-19 outbreak.

Because there is no historical precedent on which to rely, the proper strategy is to lean on real-time data to make forecasts, according to three of the four digital brokers that spoke to JOC.com. If the real-time data is unclear, however, then it’s more difficult to make a 14- or 21-day forecast.

“The current situation is completely unprecedented,” Drew McElroy, chairman of Transfix, one of the three digital freight brokers that spoke with JOC.com. “The closest comparable situation would probably be a hurricane, but on a national scale. The difference is that when natural disasters strike, the supply chain mobilizes in the aftermath. This is a rolling situation with ongoing impact that none of us have ever seen before.”

One fact isn’t in doubt: truckload rates are higher than a month ago in nearly all US markets. Inbound rates into New York are up 26 cents sequentially in March, according to a JOC.com analysis. Inbound rates to Connecticut, Georgia, New Jersey, Ohio, and Pennsylvania are up 25, 24, 23, 22, and 21 cents, respectively. Rates are up 18 cents into California and Washington state this month.

Although none of the digital freight brokers would discuss strategy, they all agreed uncertainty is higher today than it was in January.

Felipe Capella, president and co-founder of digital broker Loadsmart, said he believes rates have peaked and will begin to normalize, but cautioned it’s too early to know when this will happen or how long it will take.

He added that Loadsmart is pricing that heightened uncertainty into its rates, and is generally confident in its ability to continue setting rates 21 days out even during the coronavirus disruption.

Aaron Terrazas, director of economic research at digital broker Convoy, pointed out this is a basic financial principle. When uncertainty rises, the probability of quoting a rate lower than what it costs to book a driver increases, particularly the further out the quote. Brokers cannot remain in business if they collect less money from the shipper than they pay to a driver with any regularity.

“To guarantee a rate right now in a highly uncertain environment, we are assuming some risk. If you are asking anyone to take on a higher risk, there is a premium that will be attached to it,” Terrazas said.

Transfix in January released an external forward pricing product that customers can use to fix rates up to one year out, or to benchmark rates at future points in the calendar, but McElroy said it is unlikely shippers would use the tool right now given the heightened uncertainty in the market.

“In terms of rates and hotspots, our predictive model is holding up very well considering most of what we are seeing is unprecedented,” McElroy said. “In the short term, we’re very confident in our ability to forecast rates. Beyond that, we really need to understand how the pandemic and the macroeconomic situation is going to play out.”

Annual contract rates up in the air

The digital brokers concede it’s harder today to develop a full-year forecast than it was in January. Going into 2020, most trucking companies and industry analysts thought volume and rates would rebound in the second half after a lackluster 2019.

Eric Starks, CEO of FTR Intelligence, a transportation research firm, said the transportation market will feel “short-term pain” in the second and third quarters, but conditions should moderately improve in the fourth quarter. Nevertheless, he doesn’t anticipate the trucking or intermodal markets to rebound to pre-coronavirus levels until the second quarter of 2021.

Terrazas was skeptical of any 2020 forecasts made prior to the coronavirus outbreak, calling them “an illusion of the time,” but was unable to comment on how the effects of the pandemic might change the way Convoy approaches existing annual contracts.

Likewise, Capella said it’s too early for Loadsmart to determine how the coronavirus will impact previously agreed-upon contract rates.

“A lot of things are gonna change in the next two, eight, or maybe even 12 weeks,” he said. “We have a pretty open relationship with our major shippers. Eventually, depending how the market goes — in either direction — we have the openness to discuss whatever needs to be discussed. But as of now, it's business as usual for us.”

Anshu Prasad, CEO of Leaf Logistics, which provides a platform for forward trucking contracts, said shippers — and even some carriers — are unsure how to balance today’s upward rate pressure against tomorrow’s economic recession.

“The rates we quoted for a six-month contract last month are neither going up, nor down this month as we formalize the contracts,” he said.