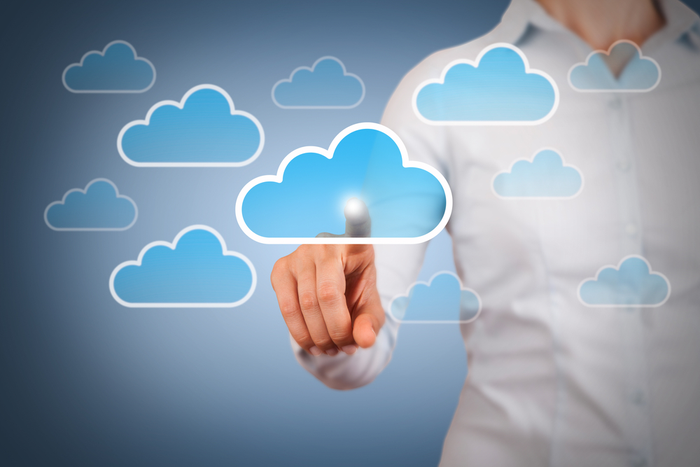 Container lines have traditionally built on-premise systems, including managing their own servers, but are increasingly eyeing the advantages of having third-party cloud hosting relationships. Photo credit: Shutterstock.com.

Container carriers have fully embraced the migration of their systems to cloud infrastructure as a way to manage fluctuations in their computing needs as they become more digitally oriented on an internal and customer-facing basis.

There remain, however, discrepancies between lines that view outsourcing their needs to cloud computing providers such as Amazon Web Services (AWS) or Microsoft Azure as a way to simplify the management of critical IT infrastructure and those that see those providers as launchpads to true business transformation.

As Brian Glick, CEO of the logistics systems integration specialist Chain.io, put it, some carriers are simply going through a “cloud migration,” while others are in the middle of a “cloud transformation.”

Industry watchers are quick to cite Maersk’s cloud initiatives as a bellwether for broader industry adoption of cloud strategies. For one, it’s the largest and most prominent global carrier. Second, it has embarked on a makeover of its business model into a digitally enabled logistics integrator. And third, in 2017, it suffered the most serious cyber attack on the global logistics industry to date.

“Maersk is leading this evolution,” said Michael Nielsen, a Maersk veteran who later moved to the ocean shipping platform INTTRA and is now an advisor to carrier operating system provider Locus Software. “You see customers gravitating to them and other carriers saying, ‘We need to be part of this transition.’”

Nielsen said there’s a direct connection between the customer-facing elements Maersk has developed in recent years — such as its online instant quoting tool Maersk Spot and its small shipper-oriented transportation management system Maersk Flow — and the carrier’s migration to cloud infrastructure.

“For Spot, you need the back end in place,” he said. “Customers themselves, they are more accustomed to being online. You need to be available in the cloud as customers expect that in a [business-to-business] environment. More sophisticated carriers are differentiating their services digitally. And if you haven’t started that, you’re too late.”

Glick said every carrier he encounters is somewhere on that path.

“One hundred percent of them are doing something in the cloud,” he said. “They all have cloud strategies. They are all trying to determine how much of their business is being operated outside their data centers.”

Will Wigmore, Maersk’s head of enterprise architecture, told JOC.com he senses much the same, that “most lines have a cloud strategy.” Maersk began working in earnest with Microsoft in 2016 on cloud hosting and is now a key Azure customer. The ability for Maersk to spin up products quickly and then scale them back without committing resources to a server infrastructure to underpin those products is a major benefit, he said.

Azure part of a bigger picture

Maersk is approximately halfway through its journey of migrating systems that were traditionally on premise to the cloud, Wigmore said. Not all of that migration is with Microsoft alone. For example, Maersk is leaning on other widely used software-as-a-service (SaaS) enterprise platforms such as Salesforce, Workday, and ServiceNow.

“What we’re trying to do from an architectural point of view is to layer,” he said. “To have systems of record, like back end, finance, and human resources; systems of insight, like our data lake and analytics; and systems of engagement, like direct customer service tools but also internal tools to support our customer teams.”

The migration to Azure is a key part of that, and Wigmore intimated Maersk sees the relationship as being more than just outsourcing of server maintenance.

“Digital transformation and self-service will rely on cloud architecture to enable it,” Wigmore said. “[Maersk] Spot wouldn’t have been possible a few years ago using on-premise. With on-premise, you can always add servers, but it’s difficult to draw it down if we launch something that doesn’t work.”

Wigmore said using cloud hosting brings to Maersk “a variable cost model,” which allows it to deploy cash resources into areas of its business that add the most value — e.g., spending on product development, rather than building server capacity.

“There are few innovative breakthroughs in back-office infrastructure, so we use cloud to improve efficiency and speed [of Maersk’s systems],” he said. “Most of our emphasis has gone into our systems of engagement. From a technology management point of view, we love it because it allows us to optimize and simplify the landscape and not spend our energy updating and maintaining on premise.”

“My sense is our industry is lagging three to four years behind FMCG,” he said.

Maersk’s push to be an integrator of containerized logistics is highly dependent on its cloud strategy, Wigmore added.

“It relies on data moving around the organization and sharing that with customers,” he said. “We want to get better at managing customer identity, so if they fit into one category, be able to move them to one set of products. If they’re more sophisticated, they go on a different journey, but we make the whole online customer experience a seamless one.”

Scalability a key to cloud move

Mediterranean Shipping Co.’s cloud journey is a bit more pragmatic as it does not have the same end-to-end integration ambitions of Maersk at present. Fabio Catassi, global chief technology officer at MSC, told JOC.com that it has been an avid proponent of the container shipping and logistics sector digitizing to make it easier for liner companies, shippers, and third-party logistics providers (3PLs) to work together. Similar to Maersk, MSC uses Microsoft Azure on a global basis.

“Adopting Azure was a natural move and it was essential to move beyond the basic infrastructure of the past,” Catassi said. “In the past, when we were hosting our own site and tools, we had some issues, but since going to cloud, there’s less of that. And there’s more responsibility to the provider. If we need 20 more machines, we don’t have to spend the capex on that.”

Catassi noted that the company’s migration to Azure was especially beneficial as it grappled with the COVID-19 pandemic.

“We realized the benefit of the shift to cloud more than we could have imagined before the pandemic erupted in 2020,” he said. “We moved everything through home with almost no issues. In certain countries, MSC was the only fully functional carrier, from a back-office perspective, for the first couple of weeks of local lockdowns. This means a lot to our people, and their ability to function in challenging times, but also to our customers, who care about having a reliable carrier partner. Using cloud computing makes it easier to meet that expectation.”

Arthur Vonchek, executive chairman at Locus Software, said that cloud infrastructure and the SaaS products that leverage it are making software more inclusive for smaller container lines as well. Locus builds SaaS operational systems for carriers, selling to a market where licensed, on-premise software was virtually the only option.

“Smaller and medium-sized lines couldn’t afford to do anything historically,” he said. “Cloud can make available the type of sophistication that only the largest carriers could afford in the past. The complexity of the 50th largest carrier is not one-fiftieth as difficult as what Maersk deals with. And in fact, some of these short-sea shipping lines have more complexity than a large carrier. But the on-premise systems were out of their reach. Cloud is a way of moving away from static, costly infrastructure.”

Voncheck noted that Azure and AWS are public cloud providers, “so you don’t know exactly where your data is. But the advantage is a huge ability to scale.”

“AWS and Azure are 100 percent enablers of what we do,” he said. “We bridge from our private cloud into AWS. Using AWS allows us to process very large amounts of ad hoc data, that would have an impact on system speed. Public clouds allow you to expand for a second and then contract. That’s where you start to see clever cloud technology deployed.”