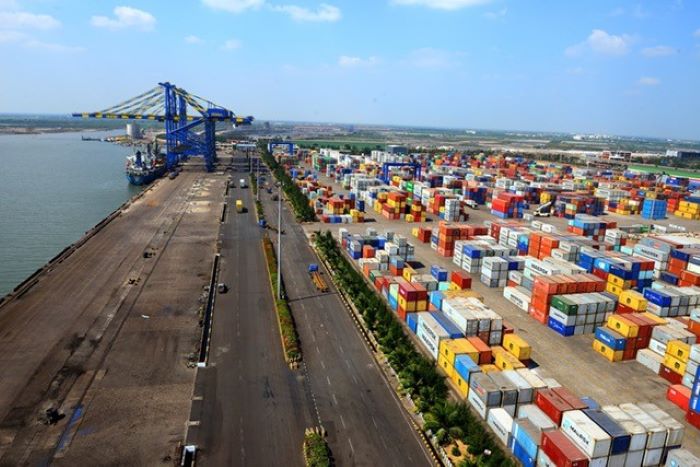 About 75 percent of targeted stakeholders have signed on to India’s revamped digital collaboration supply chain platform. Private ports such as Krishnapatnam (above) have been slow to adopt, however. Photo credit: Krishnapatnam Port.

Approximately 75 percent of targeted stakeholders — about 165 out of 219 — have signed on to the web-based program. The stakeholder group includes ports and terminals.

The July 20 deadline was largely a tactic to exert pressure; there have been no sanctions or penalties announced for those still not on board.

The Indian Ports Association, in conjunction with technical services provider Portall Infosystems, has been leading the collaboration project, under which users are able to process all port services electronically, instead of in hard-copy form — a process that typically involves inordinate transit delays and lacks shipment visibility.

In an interview with JOC.com, the PCS support team at Mumbai-based Portall said the collaboration application has developed into a technological “game changer” for India’s freight transportation ecosystem, with a host of additional features created to meet ever-evolving user demands.

“The introduction of a system like PCS anywhere in the world involves sharing and transferring data between stakeholders, which often faces resistance due to the lack of digitization in the maritime community and a lack of sensitivity for the bigger need – reducing the cost of transactions for the final importers and exporters, which the community exists to serve,” the company said in a statement, in response to a query about adoption challenges.

The pace of adoption among private minor ports continues to be a concern as only four — Mundra, Pipavav, Hazira, and Kattupalli — out of the targeted 16 non-government port stakeholders have joined the digital network. On the other hand, private terminal concessionaires at major public ports have been more proactive in PCS development efforts, with 31 build-operate-transfer (BOT) operators out of 43 joining.

The landside logistics industry, offering container freight station and inland container depot services, has an overall PCS acceptance rate of about 80% among stakeholders in that sector.

Portall, a tech subsidiary of Mumbai-based logistics leader J. M. Baxi Group, is considering incorporating blockchain-enabled services under the port portal development program as part of a cooperation deal the group signed with IBM last year. “Once the maritime world fully adopts blockchain, we would be quickly ready to offer blockchain solutions as value additions or latch-on solutions to the market,” the company said.

As India rapidly moves to a more tech-oriented freight environment, an industry-wide transition can cause supply chain hiccups, albeit temporarily. Those challenges loom as the country is holding last-ditch stakeholder consultations to launch its new customs rules concerning export-import cargo manifestations — akin to the 24-hour advance manifest rule for US cargo — on Aug. 1, after three missed deadlines.