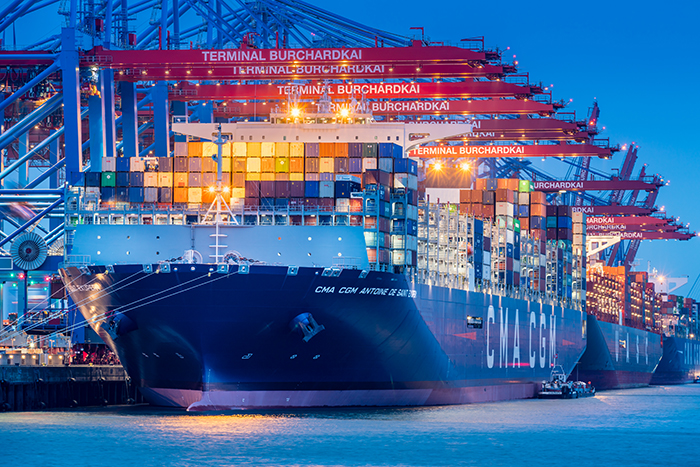 CMA CGM is only the third liner carrier to offer instant quotes through its own website, following similar initiatives by Maersk and Hapag-Lloyd. Photo credit: Shutterstock.com.

CMA CGM is offering instant quoting as part of a large release of electronic tools — including a rate management solution and priority loading on its sailings — aimed at capturing more of its shipper customers’ logistics activity in an online environment.

The Marseilles-based shipping line has been making a concerted effort over the past year to extend its reach beyond port-to-port operations, most notably through its takeover of third-party logistics provider CEVA Logistics. And it’s not alone. Maersk has been making similar strides, pulling the more lucrative origin-oriented and digital product services of its freight forwarding sister Damco in house.

The suite of online tools, called CMA CGM eSolutions, is intended to simplify a range of processes for shippers, including booking, rate management, bill of lading production, real-time estimated times of arrival (ETA), invoicing and payment, and accessorial costs.

It also makes CMA CGM only the third liner carrier to offer instant quotes through its own website, following Maersk and Hapag-Lloyd. The carrier previously offered instant quotes only through the Freightos marketplace. A range of forwarders, most recently Kuehne + Nagel, have added similar capabilities through their websites or affiliated digital commerce sites.

The carrier’s “priority boarding” service, will at first only be available to customers using its digital platform to book CMA CGM sailings from India to Europe, but it “will be gradually offered to other countries and carriers within the CMA CGM Group,” the company said.

The carrier said the platform simplifies container booking and shipping instructions submission for shippers, including an autocomplete booking feature. The eBooking feature is designed to enable CMA CGM to wrest away booking activity that occurs more commonly through ocean freight portals such as INTTRA, Infor Nexus (formerly GT Nexus), and CargoSmart. The idea is to more directly capture data related to such processes, instead of it being routed to a third party.

Providing updated ETAs would theoretically enable a shipper to get better insight into its in-transit containers shipped with CMA CGM, although a range of third-party visibility providers also provides this service across all carriers, often including predictive ETAs in addition to status change alerts.

Perhaps the most interesting element of the eSolutions platform is its ePricing function, which allows shippers not only to get instant spot quotes but also lets them electronically manage their contract rates. Giving shippers the ability to manage contracts in real time through an online platform overlaps to some degree with contract management software, third-party tools that allow shippers to manage their database of rates across carriers and non-vessel-operating common carriers (NVOs).

The platform also allows shippers to estimate in real time the costs incurred on a sailing, including a “detention and demurrage simulator.” Again, these functions overlap with capabilities from third-party software providers that let shippers calculate estimated accessorial charges, including free time, for in-transit cargo across all their carriers and NVOs.

The overlapping of functionality with third-party software and logistics providers begs a question: is there value in these kinds of tools if they are limited to a single transportation provider? Sophisticated rate management tools, for example, allow shippers to view contract rates not only across all of its various lanes but all of its carriers as well. CMA CGM wasn’t immediately available to comment on how these tools might integrate into a shippers’ existing systems that touch other carriers.

The suite of solutions should also be seen as another sign that large European carriers are seeking greater control of the data they collect and provide to the market, control they have largely ceded to those same third-party providers. One vehicle to pull back control of carrier data is TradeLens, a blockchain-based documentation and visibility platform developed in part by CMA CGM competitor Maersk. Another is the Digital Container Shipping Association (DCSA), a group of four top liner carriers seeking to drive data standards in container shipping. Notably, CMA CGM is not a current member of DCSA.

The release of eSolutions can also be seen as the next iteration of CMA CGM’s erstwhile digital platform Freddie, which the carrier launched in the first half of 2017. As of mid-2018, Freddie was no longer active. At that time, a CMA CGM spokesperson told JOC.com that Freddie was being folded into a broader suite of electronic tools.