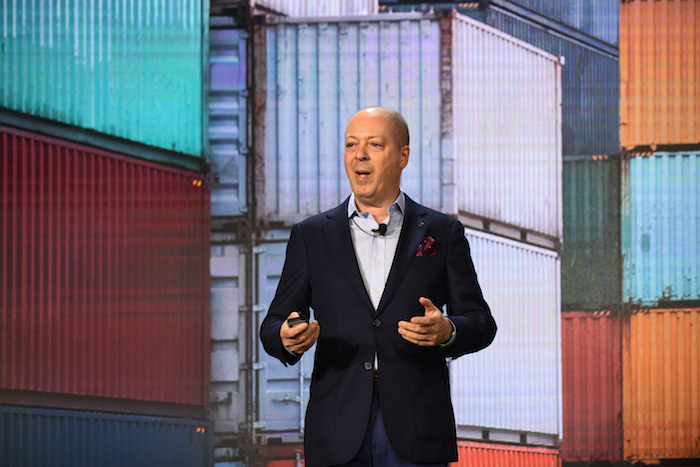 It took fewer than five months for container line members of the Digital Container Shipping Association to develop its first set of data standards. Photo credit: Caught in the Moment.

This week’s release of a set of data standards to undergird the movement of cargo, containers, and vessels by a group of container lines confirms what many in the industry have suspected since its inception: Carriers will drive the agenda, with polite nods to other stakeholders.

In early March, André Simha, chief commercial officer at Mediterranean Shipping Co., was asked at the Journal of Commerce’s TPM19 conference whether an initiative between a handful of container lines to develop data standards and system interoperability would be limited to input from the carriers themselves.

Months earlier, MSC and four other carriers unveiled plans to start the Digital Container Shipping Association (DCSA), and Simha was now in the awkward position of explaining the potential benefits of the consortium without it yet receiving regulatory clearance from the US Federal Maritime Commission (FMC).

That clearance came in April, and the question about whether container lines would be deciding unilaterally on how to proceed with data standard development became all the more relevant. The question essentially boiled down to whether shippers, ports, terminals, logistics services providers (LSPs), and software companies would have a say in the development.

The fewer the better

Simha at TPM19 courteously noted DCSA welcomed the engagement, but he also said something that has turned out to be prescient: the development of data standards would take place on a faster timeline if carriers were, at first, the only ones at the table.

Simha, chairman of DCSA, was essentially saying that carriers simultaneously needed to take care of their own houses first, and that too many cooks in the kitchen spoil the broth.

If that message was met with skepticism, the announcement in recent days that DCSA had released its first set of standardized process flows for carriers has shown Simha to be prophetic. In fewer than five months, the five founding members of DCSA and four additional members had developed data maps for the lifecycle of a shipment, the provision and return of containers, and the critical steps in a vessel sailing.

The idea is that if carriers use this standardized flow of data, it will be both easier for shippers, LSPs, and software providers to work with carriers, and easier for individual carriers to develop digital products that are usable across all container lines. Those theories are yet to be tested, and indeed, the adoption of the standards across a critical mass of container lines is the next important step.

But in terms of the speed with which DCSA unveiled its first standards, it can be argued that Simha and his cohorts were correct in their belief that having fewer parties involved in the development of such initiatives yields better results.

A day after the first standards, which DCSA is calling its Industry Blueprint — or IBP 1.0 — were released, Simha took to LinkedIn to describe how container shipping might eventually evolve to more closely resemble the consumer transactional experience with which everyone is familiar today.

“The digital transformation across swathes of consumer-facing businesses has now created an environment where B2B customers also expect seamless and intuitive services,” he wrote. “This has an inevitable knock-on effect on expectations in the container shipping industry. When users accustomed to the ease by which they can book and pay for online services turn up for work, our systems seem outdated at best, and defunct at worst.”

He specifically cited how the industry needs to develop products around freight visibility (using physical devices to track goods, where possible), user interface, and blockchain to “streamline processes for regulators, port authorities, and shipping lines.”

DCSA members Maersk, MSC, and CMA CGM are involved in the development of such technologies, and the connected tangle of development of hardware and software to support that ecosystem shouldn’t go unnoticed.

It’s tempting to say this is only the first step in a long process to standardize data formats and processes among container lines that have over the years become unharmonious with one another. But it’s a big step, and crucially, it’s a quick step when it was perfectly reasonable to assume this would take time, like almost anything shipping lines do.

That is changing, though. Zim Integrated Shipping Services this week said it is directly incorporating customer feedback into the development of digital products. Maersk is unveiling new online-oriented products and partnerships on an almost weekly basis. CMA CGM is similarly focused on driving customers toward a more digital environment. Seven of the top 11 ocean carriers are in IBM’s and Maersk’s TradeLens blockchain platform. Three of the top five container lines are in the Global Shipping Business Network (GSBN), a separate blockchain initiative developed by CargoSmart and Oracle.

The great unknown at this point is whether shippers gravitate toward carrier-driven digital products, though DCSA’s first standards salvo could be a step in that direction.