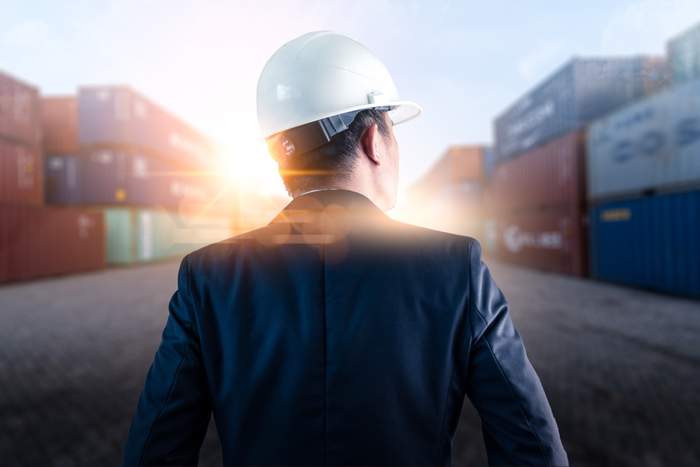 Blockchain holds immense potential value to the shipping industry, but kept in closed or private environments, it may pose an antitrust risk. Photo credit: Shutterstock.com.

The following is part of JOC.com’s The Industry Speaks series, highlighting new perspectives within the container shipping industry.

Outside observers would be forgiven for thinking that antitrust investigations are as natural to ocean shipping as, well, ships and the ocean. Earlier this year, the US Department of Justice concluded an antitrust investigation into several carriers, including Maersk and Mediterranean Shipping Co. This followed a 2016 EU probe that saw the former, along with several others, change their pricing processes to stave off fines.

In some ways, it’s to be expected. The rise of joint ventures (JVs) such as 2M, Ocean Alliance, and THE Alliance might bring cost efficiencies and other benefits to carriers and beneficial cargo owners (BCOs), but by consolidating the number of services on offer, they have long raised concerns it could also be a way of controlling rates.

Those fears have yet to be realized — container rates remain low (currently just north of $1,300 according to Drewry, with November’s $1,800 being the highest rates reached in the 2017-2019 period) — but that doesn’t keep the specter of antitrust investigations far from carriers’ minds.

A trip back in time

One would, therefore, expect that the antitrust implications of a consortium covering around half the world’s container trade would have been well thought out and properly considered.

When MSC and CMA CGM joined Maersk’s TradeLens project at the end of May, it was a major breakthrough — not just for the nascent blockchain platform the Danish business had been developing with IBM, but for the three carriers themselves.

Anyone with a reasonable memory will remember that before 2M, Ocean Alliance, THE Alliance, and any other JV, there was another — P3.

Announced in 2013, P3 would have brought together the big three in a JV covering more than 40% of Asia-Europe and trans-Atlantic capacity. Despite this, both EU and US regulators gave it the go-ahead, with only Chinese intervention putting a halt to it and leading, shortly afterward, to the CMA-less 2M.

Now it appears that the big three are all together again. The difference is that this time, they’re doing it in a digital environment.

Many feel this is now the point at which blockchain, through TradeLens, will reach critical mass. With the more recent addition of Hapag-Lloyd and Ocean Network Express (ONE), five of the six biggest carriers are now on board, and it’ll start to move beyond proof of concepts and pilots and integrate into everyday shipping life.

It’s too early to tell if the regulators are as happy. With blockchain technology being so new, it’s likely that TradeLens may enjoy a period of grace while legislators wrap their heads around it. But eventually, it’s likely, and somewhat expected, that antitrust authorities will view these sort of private blockchain consortia as no different from the cartels that they are currently cracking down on.

Martin Clausen, former Maersk Line general counsel and currently managing director of Danish legal startup Syngrato, focused on computable contracts, believes any participant on a platform such as TradeLens needs to be prepared for regulatory attention. He said “any participant will be exposed to antitrust problems, should regulators determine they exist. As preparation, potential users should ask as a matter of course to see the legal opinions TradeLens will undoubtedly have prepared in anticipation of antitrust attention.”

Navigating the waters of closed systems

As Lucy Chambers of Slaughter and May outlined on Lexology, blockchain platforms, and their participants, need to be aware of the following:

While any sort of blockchain solution, including open ones, will consider the first and last points, it is the second, with its selective participation, that TradeLens and its participants should take note of.

Ultimately, TradeLens is a closed system, or private blockchain, that parties pay in order to access the huge amounts of industry data it now holds. For forwarders that sign up on behalf of customers, how are they going to prove that TradeLens is just about sharing data in a secure, transparent environment? How can the industry at large, including regulators, verify information it can’t see?

As Vitalik Buterin, founder of Ethereum, says in an article on the different types of blockchain platforms, “the solution that is optimal for a particular industry depends very heavily on what your exact industry is.” In the context of TradeLens, in a sector that is already so heavily under antitrust scrutiny, it makes little sense to sign up to a private blockchain, run by the largest player in the market, if one does not wish to invite additional regulatory investigations.

That said, there may be no alternatives. Smaller players are unlikely to feel like they have a choice when the largest carriers are strong-arming them into using specific systems. This could be considered the flipside to the point made by Slaughter and May’s Chambers — if your only option to operate effectively is to join a closed and private system, do you really have a choice?

A new era for antitrust

We’re seeing time and time again that analog laws are struggling with the digital era. I have no doubt that we will continue to see this sort of wrangling as shipping moves further into embracing blockchain.

What forwarders and shippers should be aware of is that they will need their own resources to deal with any investigation. As we’ve seen with big tech, platforms have a tendency to hold their hands up and plead neutrality (even if that’s starting to fall apart, as Amazon found recently when it was ruled liable for third-party products), putting the responsibility on users — in this case, participants of TradeLens — to prove that their activities did not contravene regulations.

Blockchain holds immense potential value to the shipping industry. Kept in closed or private environments, however,  its impact will always be limited and may even pose an antitrust risk. The question is, will this new digital JV, or P3-on-the-blockchain if you will, be allowed to operate this time, or will participants be left exposed?

John Monarch is CEO and co-founder of ShipChain, a blockchain logistics startup. Contact him at jmonarch@shipchain.io.