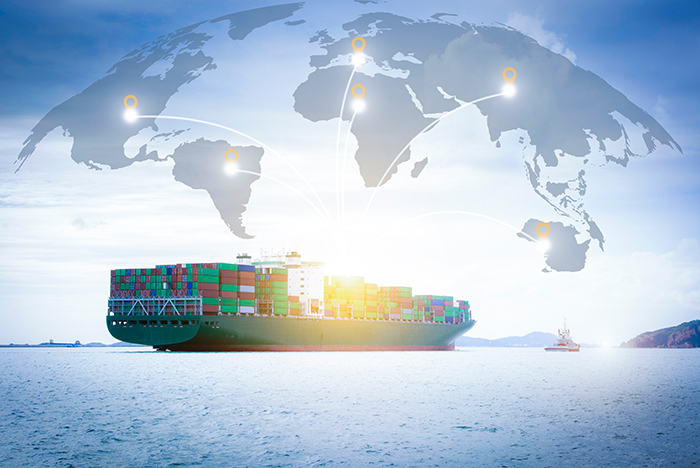 Shippers have access to more accurate, harmonized data than ever before, but the true value of that information lies in connecting it to other systems and data sources to form a more complete end-to-end picture. Photo credit: Shutterstock.com.

Think of the disparate elements of data that must come together in a smartphone app for you to book an Uber ride: maps of the area, your location, the location of the vehicle, traffic data to determine the best route and calculate an ETA, and your payment information, for starters. What makes all that data come together and send you on your way are application program interfaces (APIs), a concept that, a few years ago, no one in supply chain had heard of and still remains abstract to many. Today, APIs in the freight logistics world — and in a broader sense, the creation of connectivity among traditionally siloed data sources — represent the cutting edge of innovation.

APIs directly address a major obstacle to progress in logistics, the lack of cargo visibility — in other words, the inability to make economic decisions based on knowing the current whereabouts and status of cargo. Lack of visibility, in turn, results from underlying problems including data being inaccurate, not harmonized, and lacking connectivity among the multiple parties typically involved in the end-to-end supply chain.

For years, little changed, and goods movement has been inflexible and at the mercy of external factors, such as weather or port congestion. That’s still largely the case, as technology doesn’t exist to prevent storms or ports such as Los Angeles-Long Beach from being overwhelmed by a sudden deluge of vessel arrivals.

But the foundations are being put in place to greatly enhance the economic value of data in logistics. Just a few years ago, a statement like that could not have been made.

Data inaccuracy, for example, was accepted as a given. But in recent years, a lot of often behind-the-scenes work has been done to clean up data so it can be relied upon. One of the reasons the initial enthusiasm for blockchain has faded somewhat is that the accuracy of underlying data can’t be relied upon in an environment of immutable transactions.

But data, even if accurate and harmonized, still has little value in logistics if it exists in a silo, a legacy of prior-generation technology that only now is beginning to change, according to Inna Kuznetsova, the former president of INTTRA and current COO at data analytics company 1010data.

“You have to connect data from multiple data sources, and to be able to do that, you have to be able to access data that resides within the systems of different carriers, different freight forwarders, different customs brokers,” she said. “The data sets are much, much richer than they were five years ago due to the sheer number of people doing things electronically.”

She noted, however, that there are “a lot of pilots and attempts to [connect data], but the forwarders and carriers are not yet fully leveraging this data for optimization, and the BCO [beneficial cargo owner] still lacks the proper access to all the tracking information.”

A new strata of neutrality

Connecting data from previously siloed sources and bringing it together using APIs and other tools to make it actionable in new ways is perhaps the hottest area of logistics technology today. Talk of artificial intelligence or machine learning is largely irrelevant without accurate, connected data. That’s why progress in getting that foundation in place is so revolutionary.

“System interoperability — the efficacy with which systems talk to one another and allow data to flow back and forth — is likely the most critical issue facing users of logistics software today,” said Eric Johnson, JOC’s senior technology editor.

For example, a core premise of collaborative logistics platform Turvo, backed by $91 million in venture financing, according to CrunchBase, is that shippers in most cases aren’t looking to displace legacy transportation management systems and other previously installed software despite their limitations. Instead, it’s demonstrating that data increasingly can be pulled from those and other sources, such as Internet of things (IoT) devices, to create a coherent view of data and tools to create new levels of collaboration and decision-making.

“For us to get started, it was essential to connect to as many systems as possible through a variety of connector types  — APIs, EDI, even spreadsheet upload. Embracing and extending these systems speeds up value creation for customers,” said Matt Jubelirer, Turvo’s chief marketing officer.

The implications are profound for the industry at large. In connecting data from multiple sources, Turvo and other companies fitting this general category, including Project44, Youredi, Chain.io, Slync, and Crux Systems, are each beginning to redefine the notion of neutrality to the shipper in slightly different ways, which could eventually impact the competitive logistics landscape.

Carriers have always struggled with neutrality because they want shippers’ cargo to move on their ships or trucks. Forwarders and other intermediaries with access to multiple carriers’ assets are seen as more neutral, but in many cases have found themselves separated from their customer by a “fourth-party” logistics provider (4PL).

Now, as data becomes more accurate, expansive, accessible, and interconnected, a new strata of neutrality is emerging, driven by a new generation of technology firms, that inevitably will alter the landscape for certain shippers and freight vendors.

Tramp vessels in bulk and

Permalink Submitted by h2oshore@telus.net on Aug 30, 2019 1:18AM EDT
Tramp vessels in bulk and break-bulk trade are the closest things to Uber and Lyft ride-sharing in marine shipping but they depend on parcel sizes/freight that can cover the bare charter hire costs plus deliver a suitable margin to the Owner/Charterer that cover the risk and operating costs. Can you imagine container vessels plying the worlds major sea routes looking for container cargo ready to ship on demand which can be organized to be load ready just-in-time and sufficient in quantity/price to justify a port call? Now that would be breaking new ground indeed if somehow all that could be done through an on-line booking app! Could such a concept be developed, tested and be ready-for-market launch in a 3-5 year time-line?
Technology
International Logistics›Logistics Providers
International Logistics›Logistics Technology