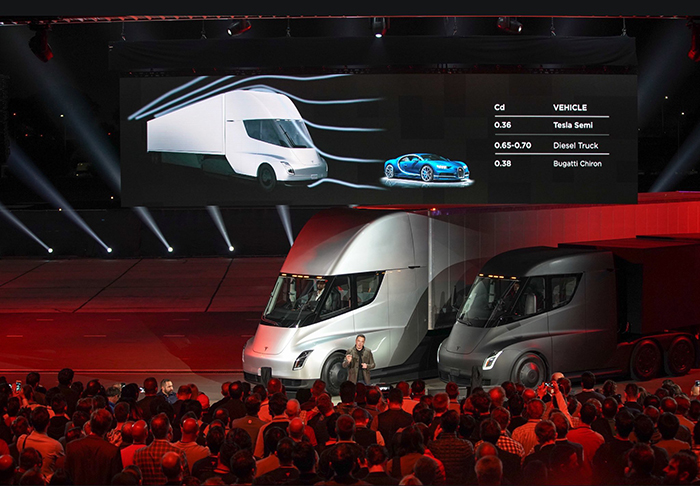 Elon Musk's Tesla has proven it can enter an established market can secure a portion of the market. Photo credit: @elonmusk.

In his Nov. 16 tweet promoting the rollout of Tesla’s new electric semi-truck, Tesla CEO Elon Musk promised, “This will blow your mind clear out of your skull and into an alternate dimension.”

Well, Tesla's event did not give one the feeling of being in a parallel universe. Nevertheless, the event created substantial buzz and produced real results in the form of options on production being purchased by companies such as J.B. Hunt Transport Services and Wal-Mart.

Will the Tesla Semi be a game-changer or are we witnessing a well-orchestrated public relations exercise aimed primarily at investors, who have given Tesla a market cap approaching that of General Motors? Perhaps a little bit of both.

Here is what we know: the Tesla Semi will have the basic configuration of a Class 8 tractor, with two drive axles, each powered by two electric motors. Its all-electric drive train will be guaranteed for 1 million miles. Much of the braking will be performed by regenerative brakes that recapture the rolling truck’s kinetic energy and pump it back into the battery instead of wasting it as heat.

The Tesla Semi will come in two models, one with a 300-mile range selling for approximately $150,000, and one capable of 500 miles on a single charge at a price of about $180,000. A network of solar-powered “mega-chargers” will be used to recharge the truck, providing another 400 miles of range in 30 minutes. The truck will be aerodynamic and will utilize a center-cab design that places the driver on the centerline of the lane. It will be equipped with a version of Tesla’s self-driving software and will be capable of operating in platoons.

And the truck will go from 0 to 60 mph in five seconds.

The last item is perhaps one hint as to the main purpose of the rollout. One would be hard-pressed to find an industry analyst who knows many trucking executives who are longing for a truck that can burn rubber, and performance claims such as these seem to be aimed more at the general public.

Unlike the prospective purchaser of the Tesla Model S sports car, the prospective buyers of the Tesla Semi are profit-oriented and will be interested in economics, not glitz. Tesla predicts a 20 percent savings versus conventional, fossil fuel trucks and says the Semi represents “economic suicide for rail.” Without the economic calculations to support these claims, however, they need to be taken with a healthy dose of salt.

Still, coming from the man whose company has figured out how to consistently land the first stage of an orbital rocket back on a floating platform in the ocean, they also need to be taken seriously.

But questions remain. Are the ranges quoted idealistic numbers, such as the miles per gallon on a car sticker — theoretically achievable but only under ideal conditions — or are they real-world numbers? More importantly, what will the rig weigh? This critical piece of information has been notably absent from any description of the Semi.

Although most of the coverage has focused on the potential of the Semi as an inter-city hauler, that is a sideshow. The main event will be the potential use of the technology in short-haul applications, where most freight resides.

In such applications, the Semi’s potential benefits loom larger, and the importance of range and recharging time recede. Agility and regenerative braking are far more valuable in stop-and-go contexts, as are zero-emission/no idle operations. A dense network of mega-chargers and quick charge times become less relevant if the round trip can be made reliably on a single charge with “recharging/refueling” done at home base. The million-mile drivetrain becomes more valuable, given the additional demands on the power train in urban/expressway driving.

The problem is that every extra pound represents an equivalent loss of payload. This may be tolerable in a dedicated operation where the shipper can adjust the payload, but it is a non-starter in a general context such as port cartage where there is no control over the load in a container stuffed overseas.

The options purchased by J.B. Hunt and Wal-Mart represent important votes of confidence. But at the initial deposit price of just $5,000 apiece (probably fully refundable), they also represent great public relations at a low price for companies interested in burnishing their image as innovative, ecologically minded corporate citizens.

Trucking sector analysts and envronmental science professionals, among others, will be watching the developments with interest. But Tesla is hardly the only entrant in the sweepstakes to replace the conventional diesel truck. In the end, the potential success of the electric truck will not be determined by the design of the truck, but by the characteristics of the battery. If enough energy can be stored at a reasonable weight, the application of the technology in short-haul technology will be assured.

That market alone is large enough to make a big overall impact. But improvements in battery technology have proved hard to achieve.

So, when it comes to the true potential of the Tesla Semi, the evaluators are from Missouri. Their refrain: "Show me."