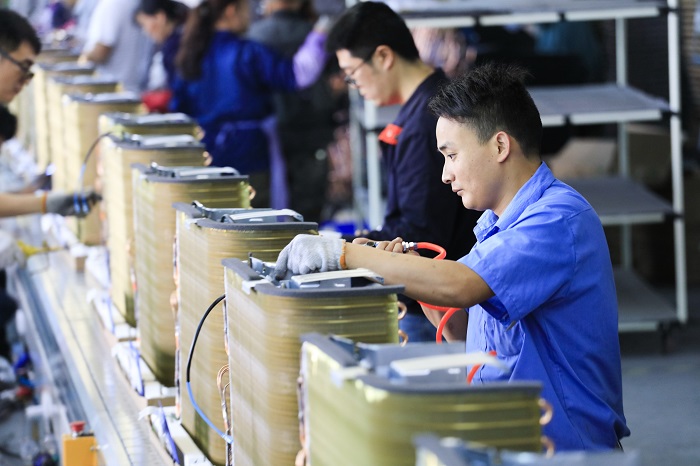 Opponents of tariffs identified the upstream and downstream effects on transportation. (Above: A factory assembly line in China.) Photo credit: Shutterstock.com.

Port authorities, chassis providers, and cargo owners testified in a week of hearings about how tariffs on Chinese-made goods would hurt ocean and surface transportation in the United States. The majority of those testifying before an intergovernmental Section 301 Committee, which adjourned Aug. 27, outlined how tariffs would hurt the international supply chain, although North American chassis manufacturers backed protectionist measures.

Opponents of tariffs identified the upstream and downstream effects on transportation. The National Retail Federation reported that a 25 percent tariff on imported furniture and travel goods would raise inbound costs 23 percent, costing US consumers an additional $4.6 billion in furniture and $1.2 billion in luggage and handbags. As inflation causes consumer spending to languish, less cargo will be imported into the United States, harming those whose jobs are tied to the ports, opponents contend.

Chassis lessors believe a 25 percent tariff could cost $100 million to $150 million to purchase 45,000 new units to replace the aging fleet, a cost that would ultimately be passed onto cargo owners and consumers. DirectChassis Link Inc. (DCLI), for example, spent $140 million in new Chinese-made chassis in the past four years, so a tariff would have cost an additional $35 million. There could also be a 25 percent tariff on post-Panamax cranes, which could cause port authorities to think twice about modernization efforts.

David Kiersznowski, CEO of Demdaco, testified that tariffs would lower sales and eventually cause him to slash transportation spending. The Kansas-based company sells figurines, photo frames, ornaments, and other home decor items in gift shops.

“Demdaco spends nearly $4 million annually with ocean carriers, railways, small parcel delivery, trucking, and customs brokerage firms. They would all be impacted by the tariffs,” he said during testimony Aug. 20.

The National Association of Chemical Distributors estimated that a 25 percent tariff would raise costs of its members by $101.3 million and result in a 1.1 percent dip in sales.

“Lower sales volumes will put more than 530 jobs at risk, as distributors need fewer truck drivers, clerks, and warehouse staff. There will also be a decrease in jobs for longshoremen, freight forwarders, and other positions that make the global supply framework possible,” testified Jessica Fegan, director of quality and operations at Connection Chemical LP.

The American Association of Port Authorities (AAPA) said ports support more than 23 million American jobs, and for every $1 billion in export goods shipped through ports, 15,000 jobs are created.

“The total Section 301 tariffs on Chinese commodities and China’s retaliatory responses to date would cover 8.4 percent of trade through America’s ports by value. In California alone, the California Association of Port Authorities estimates the 301 tariffs and responses would impact as much as 20 percent of containerized cargo imported throughout the state, representing $63.6 billion of trade value,” AAPA president Kurt Nagle testified Aug. 24.

Roughly half of US-China containerized trade is exposed to tariffs, according to PIERS, a JOC.com sister product.

Port authorities will also carefully monitor a 25 percent tariff to purchase ship-to-shore and gantry cranes built in China. An average crane costs about $14 million, according to AAPA, so a tariff would be an additional $3.5 million per unit. Multiply that by dozens of new cranes, it could slow capital expenditures.

The Port of Virginia, for example, plans to spend $40.9 million to cover costs of cranes, parts, delivery, and installation at the Virginia International Gateway terminal.

“The imposition of a 10 percent or 25 percent duty on such high cost infrastructure capital equipment has the potential of causing a delay to the project schedule and increasing its cost, thereby adversely impacting the project's benefit to the national economy,” testified John Reinhart, executive director of the Virginia Port Authority.

What happens if Konecranes builds some parts, but not all, in China? What if Konecranes assembles the crane in Europe using parts entirely made in China? Is the whole crane subject to a tariff? None of the crane manufacturers testified during the weeklong hearing. Like shipping containers, there are no US-based manufacturers, although there are high-tech components.

“Inclusion of gantry cranes on the product list subject to tariffs poses a direct threat to [our] major infrastructure project, which the nation can ill afford,” Reinhart said. “Any high tech componentry for the cranes is sourced in the US by a Virginia company.”

While there are no crane manufacturers specifically asking the Trump administration for protection, chassis are a different story. Chassis lessors oppose a tariff on equipment built by China International Marine Containers (CIMC), the largest worldwide manufacturer. Two US-based chassis manufacturers support the tariff, however, telling policymakers that CIMC hinders competition with low pricing.

Although prices vary based on specs, an average chassis costs $10,000 to $14,000 per unit. CIMC president Frank Sonzala explained to JOC.com that on a recent order, his company would have to pay $1.625 million in tariffs, which he calls unfair in a global economy. Others believe CIMC is the one being unfair.

“I’ve had customers who I’ll quote, then [CIMC] will come in at $500 less. The customer calls me back and I agree to match, then the price goes down another $500. CIMC keeps slashing another $500 until I am out,” said Pratap Lingam, president of Kwik Equipment Sales, speaking with JOC.com.

Each of the major chassis lessors, however, testified during the hearings about how Kwik and Cheetah Chassis, among others, are unprepared to handle CIMC’s annual workload. Hyundai Translead builds about 7,000 chassis in Tijuana, Mexico, while Cheetah and Kwik build another 7,000 combined across multiple US factories. They could double their output, each told JOC.com, but still wouldn’t come close to CIMC’s 45,000 chassis per year.

“When ordering 1,000 to 2,000 chassis at a time, domestic production can only deliver over an extended period of 26 to 52 weeks, while the Chinese capacity would be able to deliver over four to eight weeks,” said Jeffrey Dudenhefer, executive vice president with North American Chassis Pool Cooperative (NACPC), during Aug. 24 testimony.

DCLI testified that it has ordered $5 million in domestically produced chassis in the prior two years, but it cannot meet the needs of beneficial cargo owners.

“When DCLI reached out to one US-based manufacturer in late 2017 about their filling any portion of our 2018 requirements, we were told they had no capacity — not for one single chassis. Another told us that it had no capacity for the next six months,” testified DCLI vice president James Heidenreich on Aug. 24. “While tariffs could potentially incentivize some reallocation of manufacturing resources domestically, that reallocation is not guaranteed, and it is doubtful any such reallocation could occur fast enough to meet nationwide demand for new chassis capacity.”

“In a recent Flexi-Van purchase order this May, we were informed that chassis line space would not be available until the end of 2018. Flexi-Van has lost business opportunities to new chassis lessors with newer fleets in the past year because we simply could not secure new equipment in a timely manner to meet customer requirements,” he said on Aug. 24. “[Also] there are no chassis manufacturing facilities in certain key demand locations, such as the US West Coast. The US chassis manufacturing industry cannot satisfy even one-third of the anticipated domestic demand.”

Heidenreich argues tariffs would lead to shortages/dislocations of chassis

He concludes that tariffs would lead to “shortages or dislocations of chassis that create congestion at ports and rail ramps [and] delays in the delivery of goods.”

Such a situation is unlikely, according to Cheetah Chassis president Garry Hartman, because CIMC would not cease production even with a tariff. Sonzala confirmed as much in a conversation with JOC.com, so money is the concern more so than shortages.

“[NACPC] provides an at-cost pool to its members and customers. The at-cost model would simply add the tariff cost to existing pricing and pass [it] along to the trucking community, direct customers, and users of the chassis,” Dudenhefer testified.

How to make sense of the dollars and cents to shippers is the tricky part.

Whether it’s an additional $100 million to $150 million per year on 45,000 CIMC-built chassis, or DCLI’s $35 million addition on the balance sheet, the figures appear staggering.

Cheetah Chassis and Kwik Equipment Sales counter that lessors depreciate equipment over 10 years and rent it out 300 days per year to haul containers potentially carrying hundreds of items.

Let’s assume a chassis provider bought 3,500 new chassis totaling $35 million next year. New tariffs would total $8.75 million. Divide the additional cost by a decade of useful life and a single year costs $875,000. Divide that by 3,500 units, it equals $250 per year. Divide by 300 days and the total is 83 cents. Finally, assume a container holds 500 stock keeping units inside — the shipper is paying less than a penny extra per item.

Whose math is most accurate? Will shippers really feel the impact on their freight invoices? Will transportation budgets when broken down to the individual cargo actually increase by a noticeable amount? The industry won’t likely know the answers until decisions flow through the supply chain.