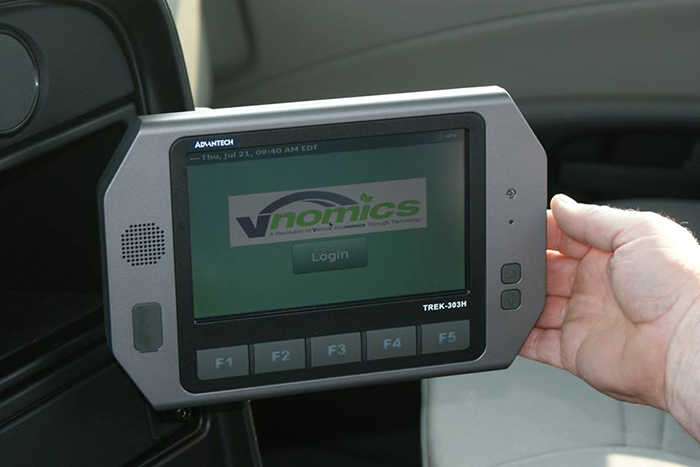 Electronic logging devices such as the one pictured were expected to put a serious dent in U.S. trucking capacity, but a lawsuit has put that expectation in doubt.

WASHINGTON — The controversial mandate requiring electronic logging devices in U.S. trucks by the end of next year will reappear before a federal court next month, jeopardizing the fate of the rule itself, and the so-called “capacity crunch” it was expected to generate.

A group of independent truck drivers seeks to win an injunction against what they see as an unconstitutional attempt at federal overreach, and if successful will prevent upward pressure on trucking rates that would have driven more cargo from roads to rails.

Once-certain industry experts now say there’s a chance the federal regulation could be tossed out before it’s ever implemented, giving shippers some hope that the current market, already in their favor, lasts that much longer.

Late last year, the Owner-Operator Independent Drivers Association announced it would be taking the Federal Motor Carrier Safety Administration to court, seeking to win an injunction against a 2015 federal regulation requiring truck drivers to use electronic rather than paper logs by Dec. 18, 2017.

A hearing before the U.S. Court of Appeals for the Seventh Circuit in Chicago will be held in September. And like previous OOIDA lawsuits, the case will likely launch years of litigation involving the FMCSA and supporters of the ELD mandate, including industry lobby the American Trucking Associations.

The rule has the potential to reshape the trucking and shipping business in a big way. The U.S. Department of Transportation has said it believes the ELD mandate will eliminate 1,844 truck-related accidents per year, saving 26 lives per year and preventing 562 injuries. The rule also stands to force those drivers and carriers that make a living breaking the rules off the road.

The mandate is expected to reduce truck capacity in the U.S., putting upward pressure on truck rates paid by shippers. That, in turn, is expected to drive many shippers away from over-the-road options toward intermodal shipping.

Last year, industry experts and analysts were fairly certain that was destined to be the case.

“As long as there’s not an injunction against ELD implementation or other changes in the regulatory landscape, we’re going to start seeing some tightening and that will work to intermodal’s benefit,” Larry Gross, a senior transportation analyst at FTR Associates, told JOC.com. “But, those are two pretty big assumptions. It could go the other way.”

OIDA in 2011 was able to successfully sue the FMCSA and experienced an appellate court overturn a previous ELD rule.

“The court knocked it down before, therefore we are confident they will do so again,” Norita Taylor, OOIDA spokesperson, told JOC.com this week.

In its previous lawsuit challenging the FMCSA’s 2010 rule requiring certain fleets to install electronic onboard recorders, as ELDs were then known, OOIDA argued the devices violated privacy rights, could be used to harass drivers and would not improve truck safety.

The federal court decided the transportation agency had not done enough to address concerns about driver harassment and overturned the rule, sending it back to FMCSA. The court didn’t address the privacy or cost-benefit and safety issues raised by OOIDA in its lawsuit.

Congress in 2012 stepped into the fray with an order to the agency to mandate ELDs and to promulgate rules preventing driver coercion and harassment. The FMCSA released its driver coercion rule in November, and included anti-harassment provisions in the new ELD rule.

This time around, OOIDA is keeping its cards close to its chest, refusing to disclose the arguments it will use against the rule ahead of time. “Arguments will be provided in subsequent filings and during oral arguments in front of the court,” OOIDA has said.

However, the association is likely to resurrect its argument that an ELD mandate violates privacy rights guaranteed by the Fourth Amendment to the U.S. Constitution. OOIDA also claims today’s devices don’t meet the requirements set by Congress in 2012.

“The legislation mandated a device that could automatically do these things (keep driver logs), and no such device exists,” OOIDA Executive Vice President Todd Spencer said during a radio interview last year.

“This regulation is absolutely the most outrageous intrusion into the rights of professional truckers imaginable and will do nothing at all to improve highway safety,” Jim Johnston, OOIDA president and CEO said in a statement. “In fact, we firmly believe it will do exactly the opposite.”