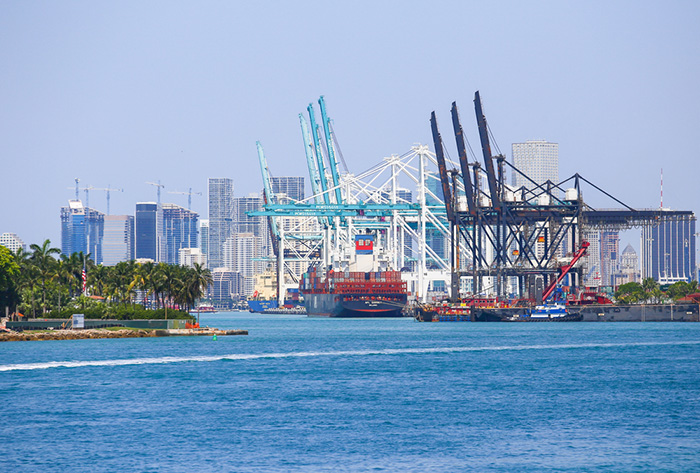 The agreement between container terminals at Port Miami, pictured, is the first of its kind in the United States.

US maritime regulators have approved an alliance between container terminals at Port Miami to jointly negotiate, set, and approve terminal rates with container lines.

Ports and terminals from Hong Kong to Rotterdam and the US Pacific Northwest have been seeking approval for such agreements to better plan for their future spending and infrastructure needs and strengthen their negotiating power with the mammoth vessel-sharing agreements that begin in April.

“These two facilities are located in very close proximity to one another, and allowing the entities that operate them the ability to communicate on a number of different topics creates an opportunity to achieve efficiencies that potentially can benefit both the Port of Miami and the shipping public more broadly," said US Federal Maritime Commission Chairman Mario Cordero.

The FMC voted on Thursday not to prevent the agreement between the South Florida Container Terminal and the Port of Miami Terminal Operating Company to discuss and agree on matters of rates, charges, rules, and regulations through joint or individual marine terminal operator agreements with ocean common carriers.

Additionally, the proposal would authorize the terminals to meet individually or as a group with one or more users, including ocean common carriers, to discuss any matters related to rates, charges, rules, and regulations.

Although such agreements are now common practice among container lines, they are still relatively rare quayside, the FMC said.

Like with container lines, the agreement does not permit members to jointly market, sell, or contract with third-parties, such as tug operators and stevedores.

According to FMC Commissioner William Doyle, agreements such as that in Miami are a direct response to the Ocean Alliance, a VSA between China Cosco Lines, Evergreen Line, CMA CGM, and Orient Overseas Container Line.

“Since the Ocean Alliance is allowed to jointly negotiate as an alliance with marine terminals who agree to do so, some marine terminal operators and port authorities may want to explore options for entering into their own alliances where they could jointly negotiate terms and conditions with the ocean carriers,” Doyle said at a North Atlantic Port Association meeting in mid-December.