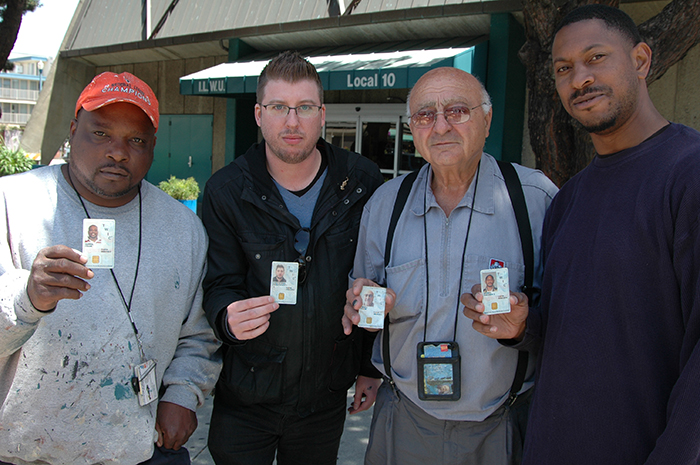 Dockworkers pose with their Transportation Worker Identification Credentials, which were mandated by Congress in the aftermath of the September 11 terror attacks.

The U.S. Coast Guard on Tuesday issued a final rule requiring the electronic readers for an estimated 525 facilities designated as highest-risk “Group A” under the TWIC program. Container terminals are in a Group B category that’s exempt from the rule.

The Coast Guard’s action is the latest development in a long and convoluted effort to comply with a congressional directive, issued months after the Sept. 11, 2001, terrorist attacks, to develop a universal biometric identification system for unescorted access to ports.

Congress ordered development of biometric IDs in the Maritime Transportation Security Act of 2002, which launched a process of background checks for port workers, others requiring unescorted access to port facilities and truck drivers hauling hazardous materials.

The congressional directive has proved difficult to carry out.

The Transportation Security Administration has issued more than 3 million TWICs, but without electronic readers they serve primarily as a $128 photo ID. The Coast Guard, tasked with developing requirements for electronic TWIC readers, has struggled with technical and other issues.

In its final rule, published in Tuesday’s Federal Register, the Coast Guard offered lengthy discussion of many of the 1,200 comments it received in response to a notice of proposed rulemaking in 2013.

TWIC reader requirements have undergone multiple regulatory reviews, resulting in repeated delays. Some industry commenters questioned whether the program was unworkable and should be scrapped.

The Coast Guard defended the requirement for TWIC readers, saying they would provide more security than visual checks, which are prone to mistakes by security guards who have no way to verify a card’s biometric identification.

“The TWIC program, including the electronic inspection requirements of this final rule, is an important component of the Coast Guard’s multilayered system of access control requirements designed to enhance maritime security,” the agency said.

In response to industry comments, the Coast Guard said it tweaked its final rule in order to provide facilities with more flexibility in their selection of electronic TWIC readers.

Instead of requiring use of readers on the TSA’s Qualified Technology List, operators may integrate TWIC inspection and biometric matching into new or existing systems for security and access to their facilities.

“We believe that this flexibility will provide robust security without causing unnecessary costs or significantly disrupting business operations,” the Coast Guard said.

The Coast Guard also revised its previous proposals by eliminating the need for electronic readers at barge fleeting facilities that handle bulk hazardous goods, and by exempting vessels with 20 or fewer TWIC-required crewmembers. The previous proposal applied to vessels with crews of 14 or fewer.

One of the top complaints about TWIC has been that the cards were not durable enough to withstand the rigorous port environment. The Coast Guard said that issue was beyond the scope of its final rule, but that card quality has been upgraded and that the last of the flimsier older cards will have expired and been replaced when the new requirement for electronic readers takes effect on Aug. 23, 2018.

The Coast Guard estimated that the rule will cost the industry about $22.5 million annually to implement, compared with the estimated $26.5 million before the Coast Guard’s most recent changes.

In 10 years, the industry’s cost would be an estimated $198.3 million. Discounted for inflation at 7 percent a year, the 10-year cost would be $157.3 million, the Coast Guard said.

If container terminals had been included in the requirement for electronic TWIC readers, the annual cost to the industry would have been $141.2 million, according to previous Coast Guard estimates.

The Coast Guard said electronic inspection of TWICs “is not particularly effective for threat mitigation” at container terminals, because use of containers for a terrorist attack would not require access within the terminal’s secure area. “Furthermore, such facilities are subject to spot checks by the U.S. Coast Guard where invalidated TWIC holders could be discovered through the use of portable TWIC readers by Coast Guard personnel.”

However, the Coast Guard noted that the ruling does not preclude container terminals from voluntarily requiring electronic verification for business reasons.