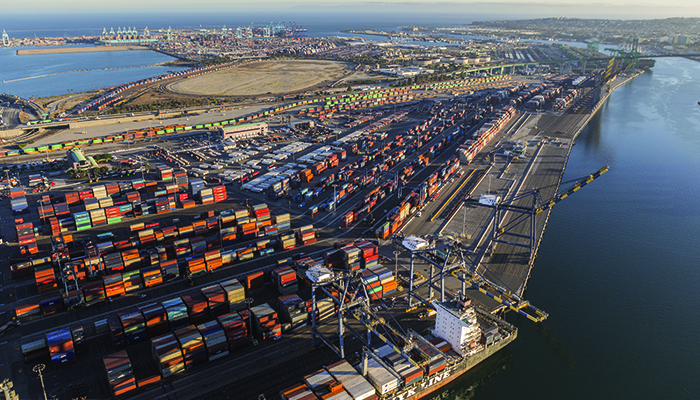 As US shippers grapple with one of the most volatile container shipping markets in years and as the specter of port congestion haunts beneficial cargo owners, federal maritime regulators are on the forefront of monitoring the market for anti-competitive practices while nudging stakeholders to make containerized supply chains more efficient and reliable.

The Federal Maritime Commission will be challenged to monitor the two new, major vessel-sharing agreements, the Ocean and THE alliances, while keeping an eye on the 2M Alliance anchored by Maersk Line and Mediterranean Shipping Co. Shippers increasingly are questioning whether container lines are fairly sharing the savings they enjoy through the deployment of mega-ships, alliances, slow-steaming, and consolidation with importers and exporters.

A long-awaited petition for rulemaking on demurrage and detention is set to pit shippers against marine terminals and carriers. A broad range of US shippers, truckers, and transportation intermediaries want the FMC to consider creating a rule to prevent marine terminals and container lines from charging demurrage and detention fees when uncontrollable forces make it impossible to pick up or return containers and chassis on time.

The 25-member Coalition for Fair Port Practices wants the FMC to require container lines and terminals to extend free days when disruption occurs beyond the control of shippers, truckers, and transport intermediaries — whether it’s a liner collapse like in the case of Hanjin Shipping, or labor disputes as seen in 2014 and 2015 on the US West Coast.

“Shippers, consignees, and drayage providers do not create and cannot avoid these events,” the coalition said. “They cannot control the weather. They do not choose the terminals that carriers use. They are not parties to port labor collective bargaining agreements.”

Supporters say the FMC has the authority to clarify its rule, because the Shipping Act of 1984, the main law guiding commissioners and staff, requires demurrage and detention fees to be just and reasonable.

The National Association of Waterfront Employers, which represents 16 marine terminal operators at ports on all three coasts, disagrees. “The FMC has made clear it will accept a complaint from any of the commercial parties alleging that the Shipping Act was violated, but as an agency they cannot, by statute, create policies regarding these issues.” the NAWE said.

At the same time, the FMC, particularly Chairman Mario Cordero, is keeping the pressure on to reform PierPass, which reduces congestion on highway and roads around the Los Angeles-Long Beach port complex by encouraging shippers and truckers to call on terminals during off-peak hours on weeknights and Saturdays.

Shippers complain the fee structure — under which shippers pay to move containers during daytime hours but not during nights and weekends — lacks transparency. They also say the night gates are dysfunctional, with terminal gates closed without notice and truckers lining up before opening to create a rush.

In response, PierPass is considering possible changes to its rate structure, with its findings due this year. Among the proposed changes is a flat fee structure, such as what’s being implemented at Oakland, that would assess a much lower fee on all containers, not just the ones that move during daytime hours. That would help small and midsize shippers who tend to be less able to open distribution centers during off-peak hours and end up paying the daytime fee. But larger shippers would face bigger impacts because they are able to move the majority of containers during off-peak hours where they pay no fee.

Cordero, one of the more vocal critics of PierPass, says the status quo is simply not acceptable. Changing that means addressing two points, he said — transparency and stakeholder involvement.

A private sector-fueled initiative guided by the FMC also will move forward on creating a national portal in which key, nonproprietary information is shared with shippers, liners, truckers, and others to reduce port congestion. The Supply Chain Innovation Teams are part of the FMC’s larger effort to reduce port congestion, which has included holding listening sessions with stakeholders at major ports and summarizing what they heard from the industry in a report.

The teams, prioritizing collaboration and innovation, are targeting the voluntary collection of not “lots of data, but discrete information,” said FMC Commissioner Rebecca Dye, who led the initiative. “Some of the information exists and to the extent it does, identifying who has the information and how it can be made available, it may be technologically difficult, but it’s not difficult to identify,” she said.

With a goal of creating a concept for the national portal next year, three new teams with members of the ports of Houston, Charleston, and the Northwest Seaport Alliance of Seattle and Tacoma will look at how to reduce congestion related to exports. The first three teams, representing 34 industry leaders, focused their attention at the ports of Los Angeles, Long Beach, and New York-New Jersey.

Just two comments; have you

Permalink Submitted by ferrullig@minds... on Jan 2, 2017 10:02AM EST
Just two comments; have you or any complainant ever read the back of the bill of lading that you sign for all shipments you make, especially that part concerning delivery. Also, the comment that shippers are questioning if savings from Alliances are being shared fairly by the carriers with shippers. Have any of them read the financial reports of carriers the past 6 years, all industry losses due to low rates, some years in the Billions? in an era of unprecedented mergers, acquisitions and the largest bankruptcy in the history of the industry, where is the mystery? I can't wait until the shippers are charged the actual cost of the services that they get, the uproar will be deafening. But considering the decision making process at the carrier headquarters, a highly unlikely event.