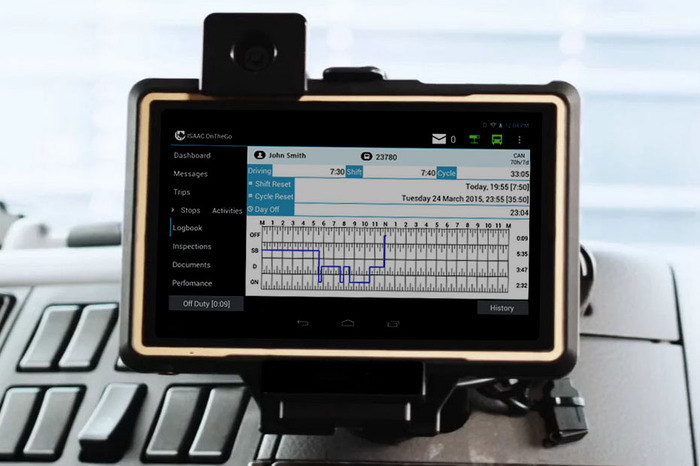 Because an AOBRD (above) provides more latitude on short movements than an ELD, the transition to the new devices in December could cause some headaches early on for drivers. Photo credit: WikiCommons.

A lot of attention was paid to the drop in driver productivity after the first electronic-logging device (ELD) mandate two years ago, and trucking companies expect a similar impact when a second wave of fleets install the equipment by Dec. 16, which could mean shippers will face rate increases in 2020.

Motor carriers using automatic on-board recording devices (AOBRDs) were given an extra two years to transition to ELDs; those two years will expire this December.

Although Federal Motor Carrier Safety Administration (FMCSA) administrator Ray Martinez is warning fleets not to wait until the last minute, conversations with telematics firms and regional fleets suggest many will do so. Even fleets who pay close attention to these issues acknowledged to JOC.com they are in the middle of the transition. The FMCSA last month rejected an application to exempt companies with 50 or fewer employees.

Although the productivity drop may not be as steep as 2017-18, trucking company Werner Enterprises believes there could be a 1 to 3 percent decline in daily productivity for many fleets during transition. That translates to about four to 12 miles per day, per truck. Although this may appear inconsequential, multiply eight miles by five days and 52 weeks, that’s 2,000 miles per truck per year.

Even if you lower the number to five miles per day, five days per week, and 50 weeks, it’s 1,250 miles per truck per year. If 2018 is any indicator, lost productivity will cause fleets to raise rates on shippers because drivers will leave the industry if their paychecks — calculated on a per-mile basis — drop too much.

“We think five miles per day is best-case and that’s only after tremendous amounts of training and a commitment to being 100 percent legal at all times,” Derek Leathers, CEO of Werner Enterprises, told JOC.com. “I think it’ll end up averaging around 15 miles per day and when you multiply that across the industry, it’s a fairly impactful number.”

Fifthteen miles would equal a loss of 3,900 miles per truck, per year.

How much productivity is lost?

A J.B. Hunt Transport Services white paper in 2015 on detention can provide an idea of real-world impact.

Thom Albrecht, then an analyst with BB&T and now chief commercial officer with Celadon Trucking, found after factoring in pre-trip inspections, fuel, weigh stations, meals, route planning, and parking issues, a driver only spends 438 minutes driving per day — about 7 hours. J.B. Hunt wrote that on a favorable day, a driver logs 406 miles in 535 minutes.

Using the more favorable J.B. Hunt figures, a drop of 1,250-3,900 miles per truck per year translates into a loss of three to 10 workdays per truck. Shippers served in that one- to two-week period will experience longer waits to move their freight and pay more to do so.

Leathers provided an example of how the technological differences in an AOBRD versus an ELD could make a difference. For example, if a driver repositions his truck to a nearby truck stop, the ELD automatically switches to on-duty status once the vehicle exceeds five miles per hour, whereas an AOBRD wouldn’t log this time before starting a shift.

“While it’s intended to be safety-oriented, what it prevents in real life is drivers simply moving their truck closer to the truck stop in the morning to grab coffee and breakfast before going on duty,” Leathers said. “If it’s not done very carefully, on ELDs it will start their clock. AOBRDs provide more freedom of movement in some of these cases.”

Brent Nussbaum, CEO of Nussbaum Transportation, explains there are other situations, too. His company is transitioning from AOBRDs to ELDs on its 450 trucks.

“With ELDs now, if a shipper comes out and tells the driver to move their truck while they are on their break, it will log them back on. Once they’re on their break now, they can’t move anywhere, whereas they could fudge that with an AOBRD,” Nussbaum told JOC.com. “It’s been a bit of a frustration to a few of our drivers, but they’re working through it.”

Kyle Kottke, general manager of Kottke Trucking, has AOBRDs on his 200 trucks. He is concerned about the transition process.

“I have my first two ELDs and the balance is AOBRDs, and I am far from alone,” Kottke told JOC.com. “I am communicating every week with other AOBRD fleets talking about a transition plan and expected transition issues. I think December will be tough just because many of us will be seeing problems we don’t completely understand today.”

Although there will be other macroeconomic factors into how much shippers pay in trucking costs, supply chain executives should pay close attention to how available capacity changes among regional truckload carriers.

What about when it takes 4

Permalink Submitted by robertauhll@yah... on Aug 7, 2019 9:05PM EDT
What about when it takes 4 hours to get loaded and another hour or two to get unloaded? Who is going to pay for the lost driver revenue? Most driver's get paid by the mile. Not to sit at a loading dock.
Regulation & Policy›Transportation Regulations›US Transportation Regulations
Trucking Logistics›Trucking Equipment
North America›United States

Global Shipping Outlook: A Sneak Peek at 2021
Port Performance North America: Managing Cargo Flow During a Pandemic — and Beyond
END_OF_DOCUMENT_TOKEN_TO_BE_REPLACED