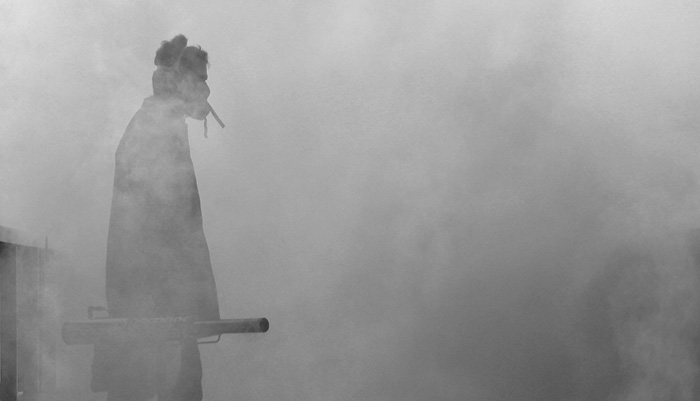 Containers from more than 30 countries and the U.S. that have recorded cases of the Zika virus are now subject to extra scrutiny from Chinese regulators, and possibly costly fumigation, pictured.

Many U.S. exporters are still confused about how to meet Chinese rules aimed at preventing the spread of the Zika virus, but are relieved that requirements are less onerous than first thought.

Even as the Chinese and U.S. governments have provided more details to provide clarity to what a shipper must do to ensure its containers enter China with minimal delay and extra cost, exporters say they have many questions and don’t expect the exact answers to emerge for a while yet.

“Is it annoying, and a headache, yes,” said Blaine Calaway, vice president of business development at Calaway Trading Inc., of Ellensberg, Washington, which ships 9,500 to 10,000 containers of hay products and grain commodities a year to China. “But it’s not something that in my opinion is going to stop business.”

Chinese regulations first emerged two weeks ago stating that U.S. origin containers could need a mosquito eradication certificate to ensure passage of goods into China. Without it, the goods might need to be quarantined or forced to undergo fumigation. The regulations, similar to those placed on more than 30 other countries affected by Zika, came out after the U.S. was placed on China’s list of countries that have a Zika problem.

Since then, as concern about the disease, which is mainly focused in Florida in the U.S., has grown with the discovery of new cases, the Chinese and U.S. governments have released statements clarifying the options facing shippers seeking to get goods into China. Yet there is still an “awareness problem,” because that information has yet to reach large numbers of shippers, and there are still numerous holes and uncertainties in the rules, industry leaders said.

“It’s still a bit of a learning curve going on,” said Bruce Abbe, executive director of the Midwest Shippers Association, a Bloomington, Minnesota trade group that represents more than 50 shippers, many of which send specialty grain and soybeans to China. “The reactions that I have heard is they would like some more clarity on this.”

The Foreign Commercial Service, part of the International Trade Administration, last week outlined the most detailed version of the Chinese government’s requirements after members of the U.S. Embassy in Beijing met with the Director General of China's Inspection and Quarantine Ministry. The U.S. government said that Chinese authorities will not require containers to be fumigated in certain circumstances, and instead they can instead be disinsected. That could be done through physical means, such as trapping, air curtains, or other integrated pest management techniques, or with chemicals sprayed onto the cargo.

The regulations cover all containers shipped from the U.S. to China — regardless of whether they come from a Zika-affected area or not. The regulations say that if an entire vessel was fumigated before or after being loaded, each container would not need to be fumigated, and products are exempt from the regulations if they contain commodities kept at 15 degrees Celsius/59 degrees Fahrenheit or below.Shippers said they may not understand the requirements for a while, once they have seen how they work in practice. Calaway said that he has heard from members that the interpretation of the regulation varies from port to port.

“In some cases, local CIQ (inspection and quarantine ministry) at various ports, they are implementing however they want. My understanding is that, for example, in Qingdao, they are stating that no matter whether you have done it on your side of the ocean and have a certificate we are still going to fumigate it over here,” he said. “So if we know we have bookings going there were are not even going to waste time and money to try and do anything on our end. We will just ship it, and let them handle it.

“In other ports, CIQ haven’t really come out and announced anything and there still seems to be confusion on their side,” he said.

One question that is unclear is what is an acceptable mosquito eradication certificate, and how is it correctly filled out, said Abbe, who called the issue “very sketchy” at the moment. He also questioned how Chinese authorities would evaluate a container of grain that originated in the mid-West, which will be well below 59 degrees in two months time, but are shipped through warmer areas, such as California, where the temperature may be above 59 degrees.

“They ought to look at where the containers and the cargo originated from,” he said.

Frederick Klose, executive director of the California Agricultural Export Council, a Sacramento-based trade group, called the regulations “fairly tame,” in part because they do not require government certification that preventative measures have been taken. That amounts to “self certification,” he said, adding that some of his clients already take such measures. He said his members include exporters of dried fruit and nuts, which already have a vigorous insect control plan that may be acceptable to Chinese requirements, and wouldn’t add to the shippers' burden.

Likewise, logs get fumigated as standard procedure before they are sent to China, and so there is no extra burden, said Hayden Swofford, executive director of Pacific Northwest Shippers Association, a Langley, Washington trade group. However, lumber is not fumigated, so the new regulations will add work, he said.

Calaway said his company already fumigates Timothy Hay, and has workers licensed to do it, to comply with Japanese requirements aimed at keeping out Hessian flies.

Much depends on how the Chinese government enforces the regulations, however, Klose said.

“The hope is that we, the U.S., our trade officials can negotiate with the Chinese, and basically say, ‘If we guarantee that the product is not coming out of Florida, can we get rid of all these, just ignore all these regulations?” Klose said. “It happens quite a bit in international trade.”