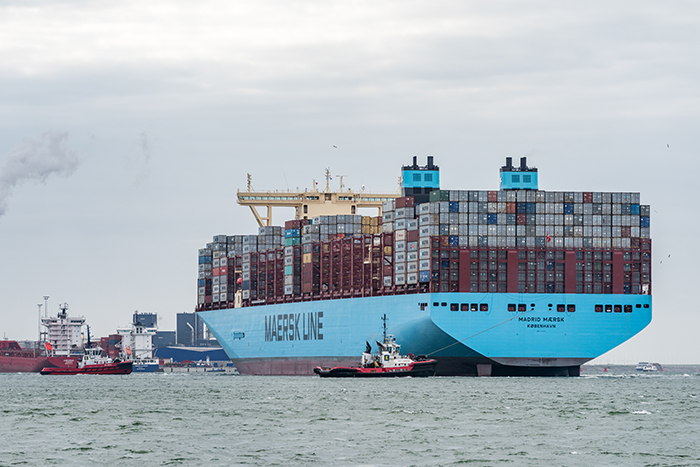 The deployment of ultra-large container vessels has seen average vessel size in the Asia-Europe trade more than double, from 7,200 TEU to 15,800 TEU, in the last decade. Photo credit: Shutterstock.com.

Shippers and others who are encouraging European regulators to repeal the block exemption for carrier consortia should be careful what they wish for.

Many see Maersk’s Triple-E orders in 2011 and the mega-ship arms race that followed as the beginning of the latest, woeful era in liner shipping, unfolding in waves of overcapacity, losses, disappointed customers, and ultimately, consolidation.

But the stage for this had been set a few years earlier, when in 2008 the block exemption from European competition law for liner shipping conferences was repealed.

With conferences dating back to 1875, based on the need to contain rate volatility and encourage investment in an asset-intensive and economically crucial industry, the repeal of the block exemption was a shock to the system, from which the industry has never recovered.

What followed from the repeal was a decade of misery for carriers and shippers alike. Now, shippers and many others are curiously calling for Europe to repeal the block exemption for consortia, which expires next year. A reasonable question might be, has nothing been learned since 2008?

The impact of the 2008 repeal was hard to immediately detect as it was followed in short order by the global financial crisis that whipsawed the carriers from an unprecedented $20 billion in losses in 2009 to $10 billion in profits in 2010, a year that no shipper who suffered through the layups, rollings, rate spikes, and broken contracts will ever forget.

But unfortunately for shippers, that was only the beginning of a decade of woe about to unfold. Ship sizes started growing, sparked by the 18,000-TEU Triple-Es, which — although bigger ships reduce shippers carbon footprint — delivered multiple blows to supply chains by increasing port stays and offloading times, lengthening supply chains and product lead times, reducing market responsiveness, and increasing working capital requirements.

As ships grew in size, they slowed down and transit times increased. The total end-to-end duration of services in the Asia-Europe trade rose from 8.7 to 11.3 weeks due to slow-steaming and longer port stay times required to work the larger ships, the consultant said.

But that was not all. Large-scale consolidation, which shippers fear above all else, is now a reality, with nine of the top 20 container carriers disappearing whether through merger, acquisition, or bankruptcy in the largest-ever wave of carrier consolidation. And as Maersk CEO Soren Skou said at the TPM Conference last month, more may be coming.

With all this happening in the decade since deregulation, it is surprising that so many would be agitating for repeal of the block exemption for consortia. Some believe consortia are a cover for carriers to collude; if carriers truly engaged in collusion, major investigations in Europe and more recently in the US would have led to fines or prosecution, but they didn’t.

Although few expect alliances such as the 2M and Ocean Alliance to disappear outright if the block exemption were eliminated, such a move would curtail carriers’ activities and only weaken them further. The past decade shows that without adequate profitability — the state of affairs that has followed Europe’s elimination of antitrust immunity — carriers will take actions that prioritize their own survival over service to customers.

That explains the mega-ship arms race, the slow-steaming, the gutting of customer service, and, of course, the emergence of mega-alliances. There is no doubt that alliances have come to dominate the industry, with formerly independent carriers such as Maersk now part of alliances and the three largest ones representing roughly 80 percent of overall container trade and operating about 95 percent of the total ship capacity on east-west trade lanes, according to a report by the International Transport Forum of the Organisation for Economic Co-operation and Development, which is leading the charge for repeal.

But the growth of alliances came about as a result of carriers’ weakened financial state; for carriers, alliances opened up new opportunities for operational synergies and cost savings. Eliminating the legal protections around alliances would reduce those benefits, which all else being equal will push the industry towards even greater market concentration that would undermine Europe’s desire to promote competitive markets.

The timing for possible repeal could hardly be worse, with the International Maritime Organization’s 2020’s low-sulfur fuel rule meaning that “vulnerable carriers could be pushed into M&A [mergers and acquisitons] by the extra costs associated with the new low-sulfur fuel law,” Drewry said recently. Global trade is forecast to slow significantly this year, according to the World Trade Organization, which will only extend the overcapacity carriers have experienced for the past decade.

The reality is that shippers, and by extension the estimated 60 percent of ocean trade carried by containers, need carriers to be healthy financially. Their ability to operate in alliances helps enable that. The past decade since the end of antitrust immunity in Europe shows what happens when carriers are not healthy financially; the reality is that huge costs get pushed back to shippers.

It’s then that the modern global trade system, which containers have done so much to create, fails to live up to its full potential.

While I agree with your

Permalink Submitted by ferrullig@minds... on Apr 9, 2019 11:34AM EDT
While I agree with your premise that people should be careful what they wish for, in this case the potential that the block exemption expires - then what? Fewer carrier serving the EU, meaning less competition, etc But the theory that carriers need to be financially healthy is logical, but not fact. In the last 10 years the industry lost over $30. Billion with mergers, acquisitions and a major bankruptcy. There used to me over 30 relatively major liner carriers 40 years ago, now in reality 10 or fewer. But they are still there as many of them are owned or supported by nations and may not have a real profit motive. Not so say they want to lose money, but there are other objectives on a national basis that keeps them not only afloat, but growing.
Regulation & Policy›Transportation Regulations›International Transportation Regulations
Maritime News›Container Lines

Global Shipping Outlook: A Sneak Peek at 2021
Port Performance North America: Managing Cargo Flow During a Pandemic — and Beyond
END_OF_DOCUMENT_TOKEN_TO_BE_REPLACED