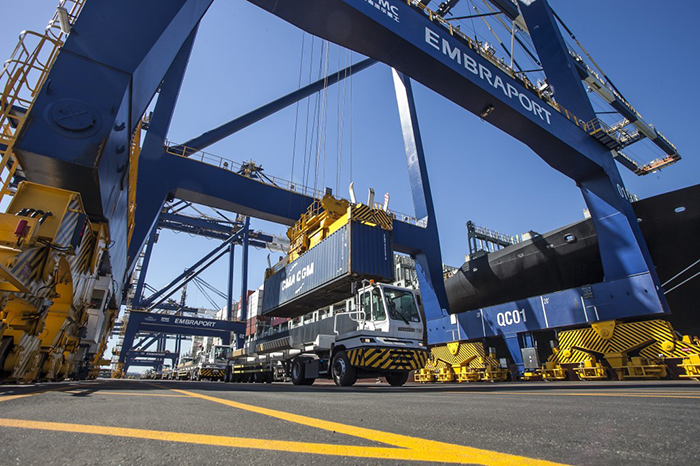 Embraport in the port of Santos will likely be among the first to take advantage of the rule changes.

Private marine terminal operators in Brazil, and particularly Santos, will benefit from legal changes that add 10 years to the length of some concessions and allow other terminals to expand without getting planning approval.

The creation of 35-year private terminal concessions in organized port areas, and making it easier for private terminals that own their land to expand, will lead to investments totaling 10 billion reais ($3.2 billion), according to the government, which must still approve legislation making the changes law.

“There have been barriers against these terminals expanding and now they have been removed. That is great news and will definitely attract more outside investment,” said Robert Grantham, a director for the Solve Shipping consultancy based in Santa Catarina.

Twenty owners of pre-1993 contracts had been in planning and investment limbo, he said. That uncertainty grew with the Port Law of 2013, which called for pre-1993 contracts to be annulled so the government could create larger entities by merging neighboring facilities and profit by putting them back on the market.

The changes were a necessary correction to the Port Law of 2013, which prevented terminal operators from investing in land they owned, to the detriment of exporters and Brazil, said Wilen Manteli, president of the Association of Brazilian Ports and Terminals. Manteli was essential in getting the changes pushed through Brasilia.

The 2013 law barred terminals from expanding their existing footprint more than 25 percent without planning permission and the pending legislation would do away with that requirement.

In Santos, the legislation would allow Embraport — a DP World and Odebrecht TransPort joint venture — to expand its footprint. That development, however, could moot talk of a “super terminal” concession from Codesp, the Santos port authority. That concession would have involved the merging of the Rodrimar and Termares container terminals and the Deicmar breakbulk terminal to boost efficiency and throughput. These terminals would have lost their concessions if not for the extensions, leaving them no real choice in forming the “super terminal,” if they wished to remain active in Santos.

Other terminals that may quickly take advantage of the law if it is passed are in Itajai and Itapoa.

“If this decree is granted, it will be a big leap forward for more private investment into Brazilian port infrastructure,” Grantham said.

Global Shipping Outlook: A Sneak Peek at 2021
Port Performance North America: Managing Cargo Flow During a Pandemic — and Beyond
END_OF_DOCUMENT_TOKEN_TO_BE_REPLACED