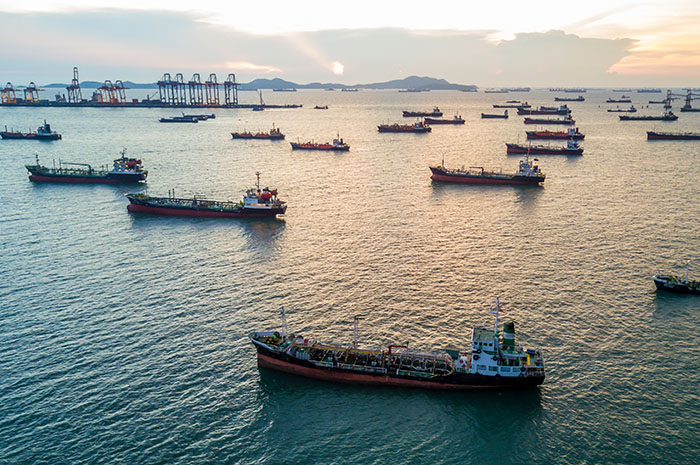 A group of eleven major banks, financing 20 percent of the global shipping fleet, have agreed to adjust their lending procedures in order to incentivize the decarbonization of maritime vessels.

The Poseidon Principles, which were announced Tuesday, is a framework agreement aimed at aligning investors with the International Maritime Organization’s (IMO’s) 2050 mandate to cut carbon dioxide (CO2) emissions 50 percent as compared to 2008 levels.

Under the agreement, lenders, relevant lessors, and financial guarantors will “quantitatively assess” the sustainability of vessels within their existing and future shipping portfolios using an annual efficiency ratio of grams of CO2 per ton-mile and “disclose whether financial institutions’ lending portfolios are in line with adopted climate goals,” according to a statement from the group.

Paul Taylor, global head of shipping and offshore at Societe Generale Corporate & Investment, said the agreement offers “significant benefits to the global shipping industry and society and they allow us as banks to align and de-risk our portfolios in line with shipping’s green transition.”

Created in a joint effort among investment banks Citi, Societe Generale, and DNB, key industry stakeholders A.P.Møller Mærsk, Cargill, Euronav, Lloyd’s Register, Watson Farley & Williams, and experts at the Global Maritime Forum, Rocky Mountain Institute, and University College London Energy Institute, the principles are completely aligned with IMO regulations, according to the statement. For this reason, the principles are expected to change as the IMO adjusts its mandates to reach its 2050 CO2 emissions goal.

Michael Parker, global industry head of shipping and logistics at Citi and chair of the Poseidon Principles drafting committee, said Tuesday at the Marine Money Conference in New York City that the Equator Principles were a precedent for the Poseidon Principles. Launched in June 2013 and currently adopted by 96 financial institutions in 37 countries, the Equator Principles is a risk management framework for assessing and mitigating environmental and social risk in projects, providing a minimum standard for monitoring high-risk decisions. The signatories of the Poseidon Principles hope to follow in these footsteps, setting a more definitive market standard to hold financial institutions accountable, Parker said.

To ensure compliance with the principles, the transparency mandate was included in the Poseidon framework, which commits signatories to publicly publishing annual reports detailing the overall climate alignment of its shipping portfolio. Signatories are also required to use “data types, sources, standards, and service providers established by the IMO,” so as to provide reliable and unbiased information to assess climate alignment, according to the Poseidon Principles website.

The agreement comes at a time when regulators and industry leaders have identified decarbonization as the next great challenge -- and potential threat -- to the shipping industry. As Hugo De Stoop, CEO of international tanker carrier Euronav put it at the Marine Money Conference, shippers have decided it is in their best interest to “be a part of the solution,” rather than wait and succumb to regulation. Among the several solutions to catalyze sharp reductions in CO2 and other pollutants from maritime shipping are carbon pricing schemes, innovative ship designs, alternative fuels, and operational adjustments on the part of ocean carriers.

A carbon pricing scheme is an economically efficient incentive to reduce greenhouse gas (GHG) emissions that is enforced by a global regulatory body. There are several different market-based measures to consider when implementing carbon pricing such as an offsetting scheme, emissions trading scheme, and climate levy, according to a 2019 report by the New Climate Institute. In the case of an offsetting scheme, ships are required to compensate for their GHG emissions by buying emission reduction credits, while an emissions trading scheme places a cap on the total GHG emissions for international shipping, allowing companies to buy and sell allowances under the cap. In a climate levy, a set price would be attributed to each ton of GHG emitted by ships.

"The 2020s will be a critical decade for not only piloting and prototyping new fuel types and energy sources but also building future fuel supply chains," said Alastair Marsh, CEO of Lloyd's Register, the sole classification society involved in the initiative.

Maersk Line has opted to focus their energies on innovative ship designs rather than financial incentives, committing to the development and deployment of a commercially viable zero-carbon vessel by 2030, and a fully decarbonized fleet by 2050. The world’s largest container carrier invested $1 billion from 2014 to 2018 in energy efficient solutions.

"To deliver on ambitious climate targets, zero-emission vessels will need to enter the fleet by 2030," said Soren Toft, chief operating officer and executive vice president of A.P. Moller Mærsk. "This leaves us only 10 years to develop the new marine fuels, propulsion technologies and infrastructures that will be required."

The American Bureau of Shipping (ABS), meanwhile, is championing low- to zero-carbon fuels as the next best solution to reduce CO2 emissions. In a recent report, ABS argued alternate ship designs are out of the question, at least until 2030, to meet the IMO’s 2050 mandate due to insufficient technologies. Without alternate fuels such as biofuels and hydrogen to power conventional vessels, “the gap between 2030 emissions and 2050 targets will still remain large,” the classification society warned.

Operational solutions include slow-steaming, trim and draft optimization, and just-in-time shipping. ABS cited just-in-time shipping, an inventory control strategy in which materials are delivered to manufacturers precisely when they are needed, as a measure to slow ship speeds without imposing mandatory speed limits, a short-term solution to decarbonization that restricts vessels to a certain maximum speed. Trim and draft optimization is an information-driven solution that allows carriers to adjust vessel stowage plans in order to minimize hull resistance, thereby reducing engine power and fuel consumption.

The Poseidon Principles signal cross-industry collaboration to meet the IMO’s ambitious 2050 goals. In adopting the agreement, Citi, Societe Generale, and DNB have set a precedent for the financial sector, says Jules Kortenhorst, CEO of Rocky Mountain Institute. “The principles also represent a leading example for other sectors to follow into the low-carbon future,” he said.

On the flip side, carriers are now being held accountable for their carbon reduction initiatives, with lenders potentially holding their financial well-being at stake if they fail to achieve IMO 2050 emissions targets.

Global Shipping Outlook: A Sneak Peek at 2021
Port Performance North America: Managing Cargo Flow During a Pandemic — and Beyond
END_OF_DOCUMENT_TOKEN_TO_BE_REPLACED