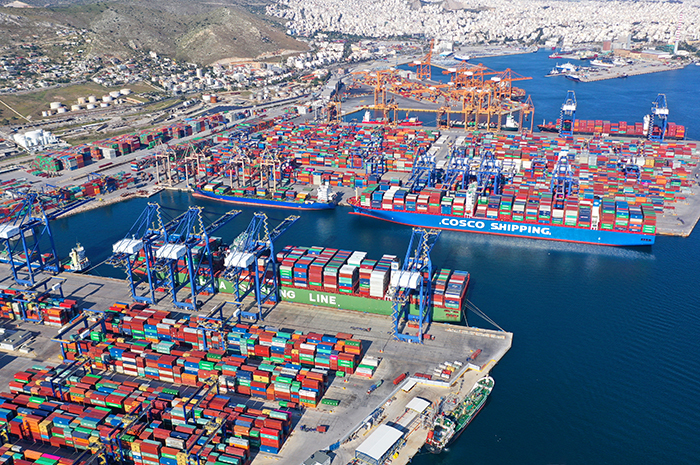 Cosco Shipping Ports in 2008 signed a 35-year concession for two container terminals at the port of Piraeus, Greece, and in 2016 acquired 67 percent of the Piraeus Port Authority for $420 million. Photo credit: Shutterstock.com.

The comments, made by Stephan Simon, senior expert mergers and case manager for DG Competition, within the European Commission, are the latest sign that EU regulators are mulling how to respond to Cosco’s deepening reach into the European port sector, as well as the broader issue of state subsidies to Asia-based carriers and shipyards.

“Some subsidies are opaque, and some are in Cosco’s balance sheet. In 2018, the profit Cosco made was basically the same as the state subsidies it was paid,” Simon said at the Global Liner Shipping conference in Hamburg on Monday. “Is this a threat? Should we be concerned?”

Simon noted that the EU does not have an equivalent to the US Committee on Foreign Investment, which required Cosco to sell OOOIL's Long Beach port terminal after the Chinese flagship line acquired the Hong Kong-based firm.

“Maybe that is something we should look at doing in Europe. Because the fact that Cosco controls Piraeus means you could make the argument that China controls Piraeus,” he said.

Since 2016, Beijing has invested heavily in Piraeus via Cosco's terminal operating arm, Cosco Shipping Ports. In 2008, the company signed a 35-year deal to operate two container terminals, and in 2016 acquired 67 percent of the Piraeus Port Authority for $420 million to become the primary operator.

Italy has also signed up to Beijing’s Belt and Road Initiative, a move aimed at securing vitally needed investment to improve rail connections between the key Baltic-Adriatic Corridor and Mediterranean Corridor.

It is an area that the European Commission is keeping a close eye on. The Commission said in a statement on March 12 that although Chinese investment has contributed to growth in many countries, those investments have also brought a risk of “high-level indebtedness and transfer of control over strategic assets and resources.”

“Cosco is one player among many, but it is state-owned and is part of China’s Belt and Road expansion. From a purely competition rules perspective, we are doing our job and there is no need to step in,” Simon said.

“But maybe we need to look at this from a broader point of view in case it leads to something that we may not want. There are political connotations we maybe need to consider.”

A spokesperson for the Commission told JOC.com that several EU member states and shipbuilding associations have complained about carriers in Asia receiving state subsidies.

“We are now analyzing this information against the background of the existing World Trade Organization [WTO] agreement on subsidies and bilateral commitments on subsidies,” the spokesperson said.

The WTO subsidies agreement has rules about specific types of subsidies that can be legally provided to a specific industry, as well as procedures for the resolution of disputes, although no investigation or dispute has been declared yet.

Non-subsidized carrier competitors have made no secret of their disapproval of the state support their Asia-based rivals enjoy. Maersk CEO Søren Skou, who has long argued that subsidies distort liner markets, said last year that state backing has resulted in “building ships that were not needed, for companies who were not profitable, and who do not have a profitable business model. In my mind there is no longer anything strategic about governments investing in shipping.”

Subsidized lines have a clear and simple business model: dominate home country exports; offer discounted rates to fill ships; recover some portion of costs via market share; and raise rates over time, where the market allows. The critical weakness, however, is that with less emphasis on profit, there is not as much shareholder pressure for carriers to cut costs and make strategic course corrections, let alone innovate.