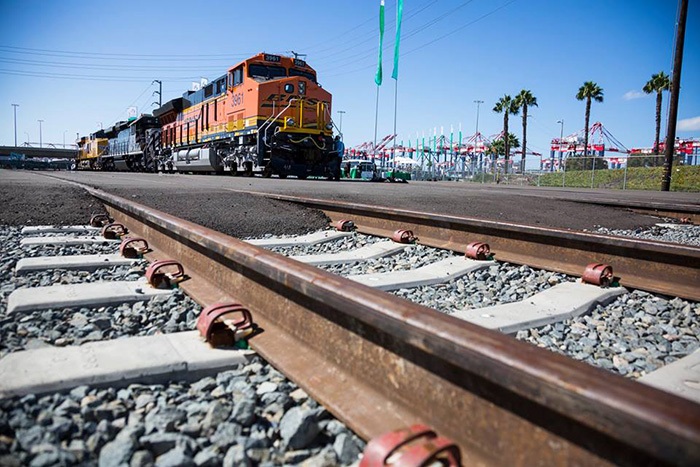 Ports are seeking a larger percentage of federal transportation funds, and with good reason: the American Association of Port Authorities has identified $20 billion in multimodal project needs for public port authorities alone. (Above: A train travels near the Port of Long Beach.) Photo credit: Shutterstock.com.

US ports want to boost their eligibility for federal funding, telling Congress that all — not just a sliver — of the $11 billion annually available should be set for multimodal projects rather than just for conventional highway and road work.

Only about $1.13 billion — or about 5.5 percent — was “multimodal eligible” under program rules, the American Association of Port Authorities (AAPA) told a hearing of the Senate Environment and Public Works Committee called “Addressing America’s Surface Transportation Infrastructure Needs.” AAPA said it had identified multimodal project needs totaling $20 billion for public port authorities alone, adding that the need for funding will grow.

“Current freight programs are funded out of the highway trust fund, which means that eligible projects are primarily highway focused,” the AAPA said in a prepared statement submitted to the committee. “One could argue that as our supply chain becomes more sophisticated and there are more inland distribution centers with the advent of e-commerce, multimodal funding will become even more in demand,” the AAPA statement said.

Congress created the Fixing America’s Surface Transportation (FAST) Act three years ago, and the hearing served as a prelude to future discussions about reauthorizing the legislature. The original act — which expires in 2020 — allocated $10.8 billion in grants for freight projects, $205 billion on highway projects, and another $48 billion on transit projects over the subsequent five years, the longest funding term for similar projects in almost two decades.

The act also required the Under Secretary of Transportation to set up a National Multimodal Freight Network to bring about greater efficiency in moving freight. The goal was to create a freight strategy and network to go beyond the nation’s highways and look at rail and port connections and iron out the details of how the US could better track productivity metrics at the nation’s top ports.

Other speakers at the hearing — among them representatives of the Associated General Contractors of America, the Sacramento Area Council of Governments, and the American Association of State Highway and Transportation Officials (AASHTO) — urged the committee to begin planning to reauthorize the FAST Act funding, focusing on the needs of highway or other infrastructure, rather than the support for ports shown by AAPA.

Carlos M. Braceras, president of AASHTO, said plans for reauthorizing the FAST Act should begin now, adding that “much of the Interstate system has now reached the end of its design life and must be reconstructed or replaced — and there is considerable need for additional capital improvements to the broader federal-aid highway network and the country’s transit system.”

The AAPA said the funding should reflect changes in the freight supply network. “To build off the work in the FAST Act, AAPA believes that all freight program funding should be 100 percent multimodal,” the organization said. “Highways are important to our freight network, but ports are multimodal facilitators, meaning rail, trucks, and ships all need access to ports.

“The FAST Act has provided the programmatic framework for a twenty-first century multimodal freight network,” the AAPA added. “However, to fully leverage the success of the FAST Act freight provisions, the next reauthorization bill will need to address increasing funding needs and identify a multimodal funding source or sources.”

The AAPA said it supports a gas tax hike to support infrastructure investment as well as the idea of placing a fee on waybills, amounting to 1 percent of the value of the total transportation cost, to support infrastructure improvement. The agency added that as a result of the FAST Act’s requirement that states submit a state freight plan to receive funding, 95 percent of states have done so. That “signals that states recognize the value and have the demand for multimodal projects,” the AAPA said.

Global Shipping Outlook: A Sneak Peek at 2021
Port Performance North America: Managing Cargo Flow During a Pandemic — and Beyond
END_OF_DOCUMENT_TOKEN_TO_BE_REPLACED