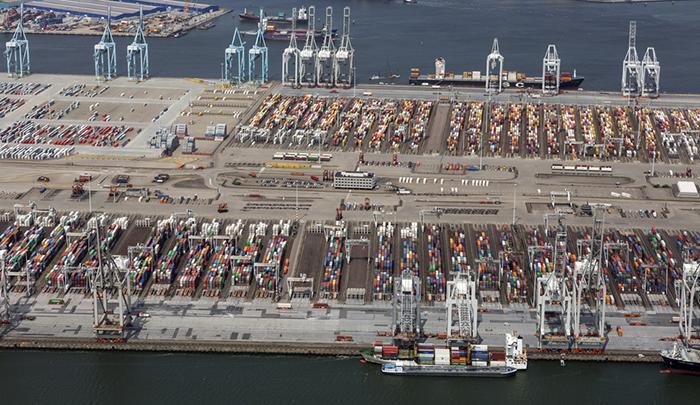 The Port of Rotterdam, pictured, has teamed up with global terminal operators as ports and terminals seek to prepare for the new shipping alliances taking effect next year.

WASHINGTON — Five of the world’s largest terminal operators and the largest port in Europe are seeking approval from US maritime regulators to discuss cooperation in operations and dealings with ocean carriers in what could mirror container lines’ own alliances.

If approved, the agreement between maritime heavyweights PSA International, Hutchison Port Holdings, APM Terminals, DP World, Shanghai International Port Group, and the Port of Rotterdam would be the first global terminal alliance. It’s akin to agreements and proposed agreements cropping up around the world — from Hong Kong to Miami — as terminal operators explore new ways to flex their collective muscle after shipping lines are set to do the same as new alliances become operational in April 2017.

While some have viewed the so-called “discussion agreements” as a way for terminal operators to jointly negotiate with ocean carriers, others have interpreted the terms as a way for operators to cooperate and share best practices. Either way, it’s just the beginning, regulators on the US Federal Maritime Commission have said.

“We’re going to see more and more of these types of agreements on the port side, whether in the US or other maritime jurisdictions around the world,” Commissioner William Doyle told JOC.com Wednesday.

The first such agreement was struck just a year ago by then-competitors Seattle and Tacoma who now form the Northwest Seaport Alliance. Now, just in the past month, three port terminal operators in Hong Kong have entered into an agreement to cooperate operationally, two terminals in Miami filed an agreement with the commission to streamline operations and jointly cooperate on items such as rates, charges, rules, and regulations and, shortly thereafter, the South Carolina Ports Authority said it was in “hypothetical and anticipatory” discussions with regulators over a potential alliance with an undisclosed port.

The so-called Global Ports Group Agreement filed with the FMC this week would apply to all terminals operated by the group members within the United States.

According to the terms of the agreement, “the members recognize a need to meet, discuss, collect, and exchange information, to facilitate long-range maritime industry planning with respect to a broad range of factors such as the promotion of excellence in port operations, management and planning, with emphasis on efficiency, safety, security, and respect for the environment; sharing and adopting best practices on those topics; facilitating, as needed, the creation of common positions, solutions, and standards among the members in response to industrywide issues or needs.”

Pursuant to the Shipping Act of 1984, the agreement would not allow the terminals to boycott or take any other concerted action resulting in an unreasonable refusal to deal or engage in any predatory practice designed to eliminate the participation, or deny the entry, in a particular trade of a common carrier not a member of the conference.

“It’s a smart move by this ports group to be cognizant of the law,” said Doyle.

Using the Shipping Act, the FMC is reviewing the discussion agreement to determine if it would likely cause an unreasonable decrease in service or unreasonable increase in transport cost.

The agreement will take effect Jan. 28 unless at least three of the five FMC commissioners choose to seek a federal injunction against the agreement. The commission can stop its 45-day review at any time to seek more information from the five terminal operators and the port of Rotterdam. Once responses are received by agency staff, the 45-day review clock restarts.

It is unclear if the Global Ports Group members will have to file with similar regulatory bodies in Europe or China.

I believe that only 1 of