Tariff damage to US agriculture exports has only begun

Tariff damage to US agriculture exports has only begun 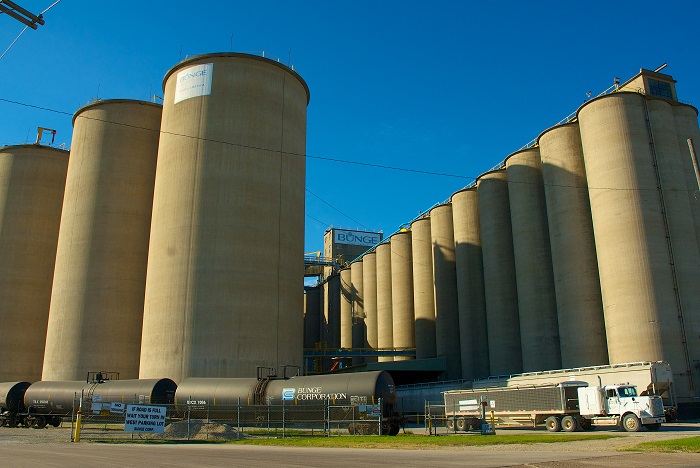 The immediate impact of lost export opportunities because of retaliation by US trading partners to the Trump administration’s tariffs is a major, negative development for US businesses. Even so, the longer-term damage from the erosion of the US’s reputation as a reliable supplier of agricultural products should really concern beneficial cargo owners, ag exporters have been told. (Above: Silos at a soybean farm in Kansas, United States.) Photo credit: Shutterstock.com

US exports of containerized soybeans — specialty crops grown in the upper Midwest such as peas and lentils — and California produce including fruits, nuts, and wine, are declining due to the trade war between the Trump administration and China, with soybean exports down almost 60 percent, but the long-term impact may be even more damaging as China shifts its sourcing to other producing countries.

On the domestic front, agricultural exporters are facing operational challenges as marine terminals, clogged with imports that were shipped early to get ahead of the tariffs, reduce free storage time, resulting in an increase in demurrage charges.

“The short term is bad, but it’s actually the long term that’s more of a concern,” said Mike Steenhoek, executive director of the Soy Transportation Coalition. Brazil and Argentina have emerged as serious challengers to the once-dominant US position as the world’s top supplier of soybeans, and the tariff war with China is helping to fuel growth in their exports, he said.

Agricultural exporters have learned that it takes years to build relationships and trust with overseas buyers, but events such as labor issues, or transportation capacity disruptions that threaten the reliability of US exports or boost the price of US agricultural products, push buying nations to look for new trading partners. “If the price is too high, the customer has options,” said Peter Friedmann, executive director of the Agriculture Transportation Coalition.

The Trump administration so far has imposed $250 billion in duties on imports from China. It announced additional tariff hikes of 25 percent to take effect on Jan. 1. China retaliated with its own tariffs on imports from the US, and agricultural products are taking a major hit. Since China usually waits until the effective date of the US tariffs before imposing its own duties, farmers are uncertain what to expect come Jan. 1. It is certain, though, that they can’t find replacement markets in less than three months. “Agriculture can’t pivot on a dime,” Steenhoek said.

China in July imposed a 25 percent tariff on US soybeans, which last year totaled $12.4 billion in value. Soybeans move mostly in bulk, although about 10 percent are shipped in containers. Total soybean exports through July were down 4.8 percent, but they plunged 58.9 percent to China, down to 2,316 TEU, according to PIERS, a JOC.com sister product.

The tariff war took the steam out of what started as a positive year for soybean exports. A drought in Argentina reduced that country’s export crop and boosted soybean prices. “Earlier this year we were bullish on the market for US soybeans. We saw a significant price increase in early 2108,” Steenhoek said. Soybean prices declined from a high of $10.71 a bushel in March to $8.62 in late September.

South American soybeans are harvested early in the year. Since Brazil and Argentina are forecast to have normal crops in early 2019, US producers will face stiff competition from them. In fact, they will not only lose market share in China, but a shortage of storage capacity at home will compromise soybean farmers’ ability to store their 2018 crop until market conditions improve.

Other US crops affected short term

In addition to soybeans, other Midwestern crops such as lentils, pulses, and identity-preserved grains are affected in the short term from uncertainties involving tariffs, and in the longer term over how buyers in Asia will view the US as a reliable supplier, said Bruce Abbe, president and CEO of the Midwest Shippers Association. “This is a futures-based industry,” he said. “Pulses haven’t been moving. There’s a lot of uncertainty,” he said.

Abbe also cited the storage crunch that larger-volume crops such as soybeans are facing. “Some of the elevators are not even offering bids,” he said. If exports diminish rapidly, it will be felt immediately at the Pacific Northwest ports of Seattle and Tacoma, he added. Statistics on the Northwest Seaport Alliance website show that exports of all types were trending upward earlier in the year, but total exports plunged 10.5 percent in August, dragging year-to-date exports down 1.6 percent compared with the first eight months of 2017.

The uncertainty over future tariff retaliation against US agricultural and forest products, and China’s actions so far this year in announcing tariff hikes and then pulling back some of the duties, is affecting the overall agricultural market, said Hayden Swofford, independent administrator of the Pacific Northwest Asia Shippers Association, which represents a number of exporters of forest products. “Most everything out of the US to China is affected one way or another,” he said.

In addition to the direct impact of tariffs, China is known for using nontariff barriers, such as suddenly changing import rules, in order to send a message to the US, Swofford said. Everything appeared to be going fine this year for forest products until late summer when the government announced that fumigation of logs in China would no longer be allowed. The containers that had already arrived had to be carried back to the US at the exporter’s cost. “It cost a lot of folks a lot of money,” he said. Continued uncertainties over tariffs and nontariff actions in China will reverberate throughout the supply chain, affecting loggers, mills, truckers, and the workers in those industries, Swofford said.

California’s agricultural sector, which specializes in high-value products including a variety of  nuts, fruits, and wine, has built a large market in Asia and especially China, and the effects of the trade war are already being noticed, Beacon Economics stated in its Oct. 5 trade report. China’s retaliatory tariffs “disproportionately targeted agricultural exports,” including California fruits, nuts, dairy products, and wine, (all of which move in containers), said Jock O’Connell, Beacon’s international trade advisor. California’s exports of those products in June-August fell by 7.8 percent to $2.64 billion compared with the same period last year, O’Connell said.

October through December are the months when  grain, feed, oil seed, soybeans and corn exporters need ample container equipment, capacity and rate stability to move their products to market, said Kim Cockrell, vice president of sales and marketing at NYSHEX. Agricultural shippers are moving cargo from the interior of the country where import equipment flows don’t match export volumes. “The availability of container equipment is an ongoing challenge since import equipment tends to be concentrated on the coasts,” she said. Contracts secured via NYSHEX come with the guarantee that the ocean carrier will provide equipment, and the carrier guarantees that the shippers’ cargo will be loaded and out of the terminal within a seven-day departure window or the carrier pays liquidated damages of 35 percent to the shipper, Cockrell said.

Transportation infrastructure and capacity, specifically the ability of railroads to move containerized soybeans and specialty crops to seaports, can affect a country’s reputation as a dependable supplier of agricultural products. The US rail industry caused headaches for agricultural exporters in 2013-2014 when the network’s capacity was overburdened by strong export crops, competition for capacity from oil moving by rail, and lagging investments by the railroads in physical capacity and crew. The railroads have since invested billions of dollars in tracks, intermodal facilities, locomotives, rail cars, and crew. Therefore, if exports decline because of tariffs, capacity on the inland portion of the move should not be a problem.

Also, with ocean rates in the westbound Pacific perpetually low because of excess capacity, shipping costs are not a problem either. For carriers, pressure remains to increase eastbound rates, such as on the spot market, because exports will continue to fail to cover their share of round-trip costs.

However, even though exporters will enjoy bargain shipping rates, carrier consolidation from mergers and acquisitions — and the reduction of carrier alliances that are a direct response to six years of carrier unprofitability from 2010 to 2016 — are reducing service options for agricultural exporters, Friedmann said. “Rates are not going up, but service is going down,” he said.

As marine terminals become congested due to strong imports and poor carrier on-time vessel performance — which was down to 65.6 percent of vessel calls in North America in July-August — caused by vessel bunching at US ports, exporters and truckers incur added expenses. Fee storage time for export containers is reduced, and terminals sometimes shut off receipt of empty containers when congestion mounts. This results in wasted trips for truckers and unexpected demurrage and detention charges for beneficial cargo owners, Friedmann said.

While the agricultural sector is conditioned to making the short-term adjustments that are needed to deal with changing global economic conditions, rail and ocean shipping capacity, and labor issues at the ports, dealing with the long-term impacts of the trade war with China is causing unprecedented uncertainties for agricultural exporters. “We are hopeful this thing ends quickly,” Swofford said.