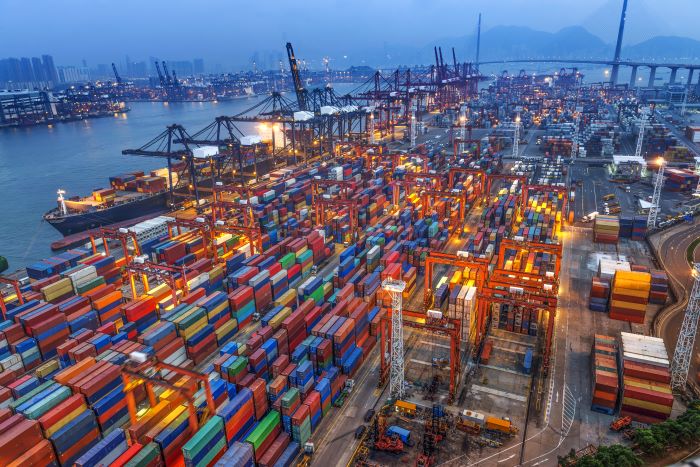 The partial trade agreement between the US and China has eased tensions, at least for now, according to the executive vice president of the US-China Business Council. Photo credit: Shutterstock.com.

RANCHO MIRAGE, California — The “phase one” trade agreement worked out between United States and Chinese negotiators at the end of last week has temporarily mitigated tensions between the two countries, but significant obstacles must be overcome before a more substantive deal is reached, a US-China business expert said.

“All this did is put a floor under the tension,” Matthew Margulies, executive vice president of the US-China Business Council, told West Coast freight forwarders and customs house brokers Saturday.

The agreement suspends a tariff increase on $250 billion of US imports that was scheduled to take effect Tuesday and includes a commitment from China to purchase $40 to 50 billion in US agricultural exports. But overall, it is a “partial, skinny deal,” Margulies told the Western Cargo Conference of forwarders and brokers (WESCCON).

“This is a phase one deal. We’re nowhere close to getting a phase two or three deal,” he said.

Although US farmers may be encouraged by China’s promise to purchase $40 to 50 billion worth of agricultural products, Margulies cast doubt whether that number will be reached. He said US sales of farm products to China in 2017, before the trade war began, were $25 billion. “So China will double that?” he asked.

The bottom line for US importers is that they must continue to evaluate their presence in the China market in terms of short-term sourcing needs, and to develop a longer-term sourcing strategy that may include a shift to other countries, including in Southeast Asia.

For US exporters, the challenge is to preserve the markets they worked hard to develop over the past 10 years. “Don’t lose market share. Once you lose market share, you can’t get it back,” Margulies said.

Exporters of brand-name consumer goods have taken a hit during the trade war because the US is losing its reputation as a reliable supplier. “The ‘made in America’ brand has lost appeal to consumers in China,” he said.

The current pause in tensions may help the parties reach a more comprehensive agreement when the US and China enter a second round of negotiations next month. “It reduces economic pressure on both of our economies,” Margulies said of last week’s deal.

Most companies will not leave China

A survey the US-China Business Council conducted in August found that despite the ongoing trade war, China is still the primary market for the vast majority of its 220 members. Some 90 percent said they are not leaving China, primarily because they have built a presence there in order to serve the China market.

The remaining 10 percent that plan on pulling out will do so because the costs of labor and taxes are forcing them to seek lower-cost sourcing. “China has not been the low-cost supplier for a number of years,” Margulies said. Manufacturers of smart-home devices and laptops are leading the movement of shifting supply chains away from China, he added.

For those companies that will continue to source most of their products from China, the survey revealed they are deploying several strategies designed to work around the Trump administration’s import taxes. They are taking steps to reduce their supply chain costs through collaboration with the Chinese factories while attempting to pass on some of their increased costs to users or absorbing the increases at the expense of profits, Margulies said.

Other strategies involve adjusting product classifications, where possible, with the intent of lowering tariffs on products that will be subject to levies scheduled to take effect Dec. 15 on $160 billion of Chinese imports. Those tariffs were not addressed in last week’s agreement.

“Long term, the tariffs and tensions still exist, so there are a lot of issues remaining. It means continued uncertainties,” Margulies said. He added beneficial cargo owners (BCOs) who apply to the US Trade Representative’s office to adjust tariff classifications, or apply for exemptions, should expect an intensive and costly process. “You can do it for one product, but not 150,” he said.

US-China trade relations could be affected by the impeachment proceedings President Donald Trump is facing, as well as next year’s elections, Margulies said. Trade issues involving China are of interest to both Democrats and Republicans. Issues involving China poll higher than most other issues, and they poll six times higher than border immigration issues, he said.

Furthermore, the negotiations will continue to take place in an environment of mutual mistrust between the US and China. “US-China ties have been frayed over the past five years,” he said.