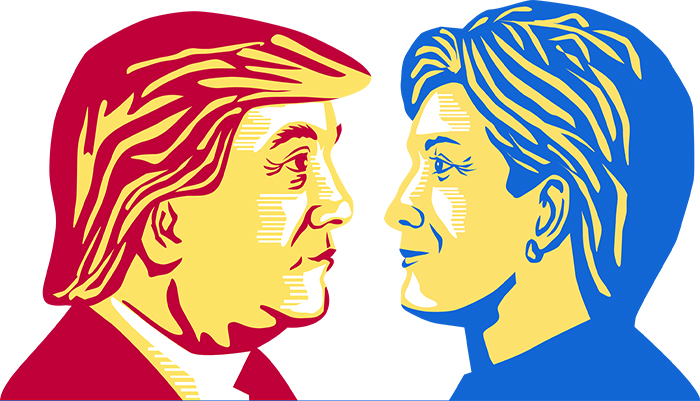 Donald Trump and Hillary Clinton share unexpectedly common ground when it comes to infrastructure and trade, even amid one of the most polarizing elections in US history.

WASHINGTON — The 2016 US presidential election has been fraught with divisive discourse and reality television-style drama, but the top two leading candidates appear to actually agree when it comes to matters of transportation infrastructure and trade.

That, of course, depends on whether the rhetoric of Democratic nominee Hillary Clinton and Republican nominee Donald Trump is to be believed. Both acknowledge that the nation’s crumbling infrastructure is in desperate need of a billion-dollar booster shot. The two have also been critical of trade deals that stand to significantly impact the cost of moving goods and break down or build regulatory barriers for shippers and logistics providers.

Indeed, the tone and tenor of their decidedly pro-infrastructure but anti-trade discourse is already having an impact on the industry. Election year politics and strident economic rhetoric is depressing some consumer demand, and that’s weighing on freight markets, according to Charles Clowdis, managing director for transportation for IHS Markit Economics & Country Risk.

“There’s a lot of pent-up demand that will only get spent after Nov. 8,” Clowdis has said.

But if Trump and Clinton agree on the broad points, it’s in the details where they diverge — often, if only because just one candidate has details.

“The Republican candidate? There isn’t much to opine about because he hasn’t said much,” Robert Puentes, president and CEO of non-partisan thinktank the Eno Center for Transportation, told JOC.com.

Like her Democratic predecessor, Clinton has proposed an aggressive infrastructure investment plan. Unlike President Obama, who faced significant pushback once in office, Clinton’s proposal not only has some teeth, but bipartisan support.

The former secretary of state has specifically called for $275 billion in direct spending on infrastructure over five years, plus another $225 billion in loans and loan-guarantee programs. The Democratic nominee has said she would bankroll the spending through business tax reform: repatriating corporate profits made overseas by US companies. There would be $250 billion allocated to direct public investment and the other $25 billion to a “national infrastructure bank.”

“The bank would leverage its $25 billion in funds to support up to an additional $225 billion in direct loans, loan guarantees, and other forms of credit enhancement,” according to the text of Clinton’s own infrastructure plan.

“Her number is a fraction of what we’re talking about. We need much more money to rebuild our infrastructure,” Trump said in an interview on the Fox Business Network. “I would say at least double her numbers, and you’re going to really need a lot more than that.”

Trump has made similar promises in other news media, never going into any more detail.

“All he’s said it that he would double whatever the Democratic candidate would propose. He’s said something about an infrastructure bank, but that’s something that came out of the Clinton camp,” Puentes said.

According to Puentes, the multi-billion-dollar infusion and the infrastructure bank supported by both candidates is actually a sound policy proposal. Corporate tax reform is a priority for US lawmakers on both sides of the aisle and repatriating the dollars and cents made overseas to avoid US taxes for the explicit purpose of rebuilding infrastructure stateside seems not only fair but just.

But transportation is a soft target for candidates. Crumbling highways and bridges is physical evidence that something must be done and the infrastructure industry employs roughly 11 percent of the civilian workforce, Puentes pointed out.

“The challenge we have in this country is not making the the case for infrastructure,” said Puentes.

That’s not the case for trade. The candidates’ positions on trade agreements and trading partners have been nuanced, in large part because their rhetoric has not always matched reality.

Clinton and Trump are critical of free trade agreements, although the former has made a career brokering those deals and the latter has built an empire taking advantage of them. They’re deals like the now-22-year-old North American Free Trade Agreement and the yet-to-be-ratified Trans-Pacific Partnership. They're deals that have provoked the ire of broad swaths of US voters who blame open economic borders for US job losses, but have had strong support from US shippers and transportation providers — like parcel giants UPS and FedEX — that have trumpeted the benefits of those same open borders for the cost-savings they drive.

While Clinton took time to ease into the conversation on trade, Trump’s assault on free trade began the moment he descended the gilded escalator in the lobby of Trump Tower in June 2015.

“When do we beat Mexico at the border? They’re laughing at us, at our stupidity. And now they are beating us economically. They are not our friend, believe me. But they’re killing us economically,” Trump told the crowd, now more than a year ago. He also targeted China and Japan in the same speech.

The Republican candidate has said he has no intention of signing TPP, even if Congress approved the deal. Moreover, Trump has said he would break or renegotiate its predecessor NAFTA and institute tariffs on imports to discourage the outsourcing of US manufacturing south of the border.

Trump has specifically called for a 35 percent tariff on Mexican auto imports. It’s a single policy detail but it would have major consequences, according to cross-border trade experts. That one tariff, alone, would effectively restore the whole lot of the tariffs that NAFTA historically removed between the United States, Canada, and Mexico more than 20 years ago.

“NAFTA is a treaty. It’s been ratified. Trump, even if he were elected, is bound by the laws of the United States. A treaty is the supreme law of the land,” Michael Camuñez, president and CEO of consulting firm MannattJones Global Strategies, said at a Brookings Institution panel in Washington, D.C., this past March.

And dismantling NAFTA — whether or not Trump would have the legal authority to do so— wouldn’t just hurt North American trade, according to Chappel Lawson, an associate professor of political science at the Massachusetts Institute of Technology.

Lawson, who served as executive director and senior advisor to the commissioner of US Customs and Border Protection from 2009 through 2011, said “tariffs would shred NAFTA up to the detriment of the United States and destruction of millions of jobs that depend on this cross-border trade.”

Mexico is the United States’ second-largest export market and third-largest overall trading partner, according to 2015 data from the US Census Bureau. US imports from Mexico held steady last year, growing from $294.1 to $294.7 billion. Exports, on the other hand, dropped some $3.8 billion. But it’s a drop that has less to do with NAFTA and more to do with depressed energy prices and a historically strong US dollar, experts say.

Camuñez said he’s come to that conclusion, in part, because he doesn’t honestly believe Trump even supports his own policy platform.

“This is a guy who is hypocritically manufacturing in Mexico and taking advantage of NAFTA just as he is criticizing it,” Camuñez pointed out.

In 2014, Trump signed a deal to produce his own clothing line with Phillips-Van Heusen, which manufactures apparel in factories in 85 countries around the world, including Mexico. It should be noted that PVH, which is also behind other name brands such as Calvin Klein and Tommy Hilfiger, has since said it is “in the process of winding down” that licensing agreement after Trump announced his candidacy last year.

Camunez and Lawson agreed that Trump’s trade platform amounts to little more than protectionist promises to rally the support of conservative voters who, by and large, blame NAFTA for the mass exodus of American jobs to other countries in the 1990s.

Clinton has been critical of NAFTA, arguing that perhaps the treaty should be reevaluated. "I think we do need to take a deep breath and figure out how we can make it work for the greatest numbers of people," she told USA TODAY.

Her tone on the North American deal has been softer than her opponent’s, perhaps because her husband championed the treaty while president. Clinton, though, has come out strong against TPP. Like Trump, she has said she would “never” sign the Pacific trade deal, even if Congress mustered the votes to move it to her desk.

That promise has put her at odds, not only with the Obama administration which has made TPP a cornerstone of its own trade agenda, but with her own remarks she made as secretary of state in the Obama White House.

There is no doubt that she was “for it before she was against it” and called TPP the “gold standard in trade agreements” during the early days before the deal was entirely hashed out.

There has been some talk that Clinton’s anti-trade talk has, like Trump’s, been a tactic to rally voter support. Not only do plenty of left-leaning Americans also blame free trade deals for US job losses, but many also see them as threats to human rights and the environment.

Fuel on that fire: Democratic Virginia Gov. Terry McAuliffe, a longtime friend of the Clintons, said in July that he believes Clinton would actually support TPP if elected president, given “a couple things we want to fix.”

As the nation careens toward the November election, US voters have heard plenty of promises. With just days to go, they’re bound to hear plenty more. But, there are two things voters concerned with transportation and trade should bear in mind as they head to the polls Nov. 8, industry experts say.

First, promises are just that: words with no guarantee. What convinces voters doesn’t always convince lawmakers. And, second, both candidates are going to need lawmakers to push their agendas if elected.

“All presidential proposals would require legislative action. Whatever happens in November would require lawmakers approval which is going to be tough given the congressional mood,” the Eno Center’s Puentes told JOC.com. “The next president has his or her hands full.”

Canada Trade and Shipping Outlook
TPM22: What We Learned — Container Shipping in the Crosshairs
Managing E-Commerce From Order to Delivery and Beyond
END_OF_DOCUMENT_TOKEN_TO_BE_REPLACED