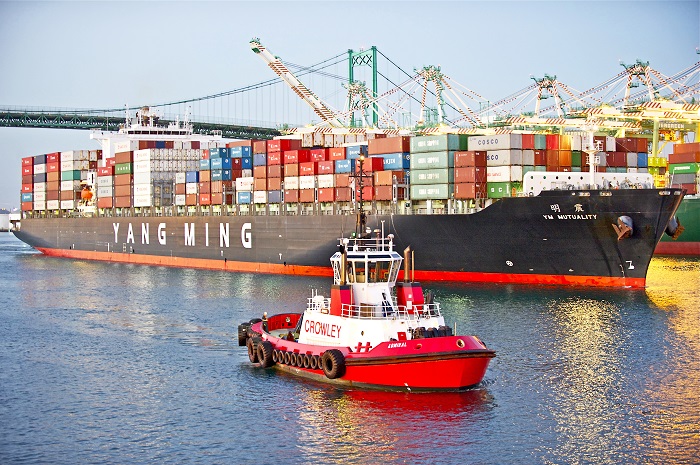 Above: A major entry point for China's imports to the United States — the Port of Los Angeles. Photo credit: Shutterstock.com.

With both sides pledging to negotiate, the ultimate impact of the threatened tariffs is unclear. The Trump administration on March 22 issued a number of waivers to its tariffs on steel and aluminum that greatly reduced their overall impact, but in terms of the container trade they will have little effect, reducing the exposure of 1.2 percent of total US imports by 0.3 percentage points.

The 1,300 items on which the United States is seeking to levy a 25 percent tariff could shrink or grow depending on feedback during a public comment period that runs until May 11 and a hearing on the matter May 15 at the US International Trade Commission. More information on the tariffs, including where to submit comments, can be found here. China’s retaliatory tariffs would also be pegged at 25 percent.

Neither country has a tariff deadline

Neither country has given a deadline for the tariffs, but the situation remains dynamic and fluid. For example, China did not initially release a list of US goods it would target to retaliate against the US tariffs on steel and aluminum, only doing so following President Donald Trump’s March 22 announcement the United States would target $50 billion in US imports from China. That initial Chinese announcement included no timeline for implementation, but a week later the government gave only one day’s notice it would go through with the retaliatory tariffs before they took effect.

The consultancy Drewry on Tuesday said gauging the impact of a potential trade war on container shipping was difficult, noting that much of the high-tech goods targeted by US tariffs moves via air transport rather than over the ocean. Rising tensions, however, are clouding the air freight outlook for 2018, despite a solid start to the year for volume and cargo yield.

“In a worse-case scenario we believe as much as 1 percent of the world’s loaded container traffic could be exposed, and were the situation to become real we would clearly have to revise our demand forecasts downwards,” said Drewry. The consultancy forecasts demand outpacing capacity this year and next, providing “slightly higher freight rates and profits for carriers.”

Chinese state shipping giant Cosco Shipping Holding said in its annual earnings conference call that it believes the dispute will end peacfully. “The trade spat between the world’s largest economies is inevitable, but it is most likely that the trade dispute would be resolved by negotiation.”

The rate of growth in targeted import commodities was 6.2 percent year over year in 2017, which was faster than the 5.8 percent increase in total US imports from China last year. The US exports of commodities China is targeting fell 30.3 percent in 2017, as shippers of brewing waste steered clear of the country’s ongoing crackdown on waste imports.

While US exporters can find new markets, so much soy is shipped to China that any tariffs or disruption to the trade could be the difference between profit and loss for soy farmers, Mike Steenhoek, executive director of the Soy Transportation Coalition told JOC.com.

China is the top destination for US soy, with exports valued at $14 billion, compared with $1.5 billion to No. 2 Mexico, Steenhoek said. While acknowledging that China’s demand is so great that it will most likely have no choice but to continue to purchase US soy, he added, “When you talk about that significant a customer, simple diversification will only get you so far.”

Import growth was led by double-digit increases in volume in seven of the top 10 commodities threatened by the tariffs. US imports of fans from China rose 32.2 percent in 2017 top 27,828 TEU, while passenger and motor vehicle imports rose 28.7 percent to 17,909 TEU. The No. 1 commodity targeted, instruments and appliances for medical, veterinary, or dental uses, rose 10 percent to 68,228 TEU, while No. 2 machinery and mechanical appliances with individual functions rose 12.1 percent to 50,120 TEU.

Wide-ranging US import tariffs on China

The import tariffs touch on everything from air purifiers to ship engines, certain semiconductors, metalworking machinery, snow blowers, dishwashers, clothes washers and dryers, and a wide array of metal and rubber components used in manufacturing. The US tariffs did not include footwear and apparel, as feared when they were first announced. Chinese tariffs on US exports are less wide reaching, focusing on plastics, chemical inputs, vehicles, and agricultural goods.

“As we’ve said all along, tariffs are taxes on consumers and a drag on the nation’s economy. While we are pleased that many everyday products such as clothing and shoes are not on the list, we remain concerned that other goods such as consumer electronics and home appliances are targets,” National Retail Federation president and CEO Matthew Shay said in a statement. “And we believe that tariffs on certain machinery will make American-made products more expensive.”

US import tariffs could apply to certain agricultural machinery, such as that for dairy and poultry production. As China has already begun to levy tariffs on agricultural goods such as apples, berries, and nuts, the threatened tariffs on soy, cotton, and corn would add to the pain for US agricultural producers. China in this latest round of tariffs also targeted beef exports, which regained access to the market last year.