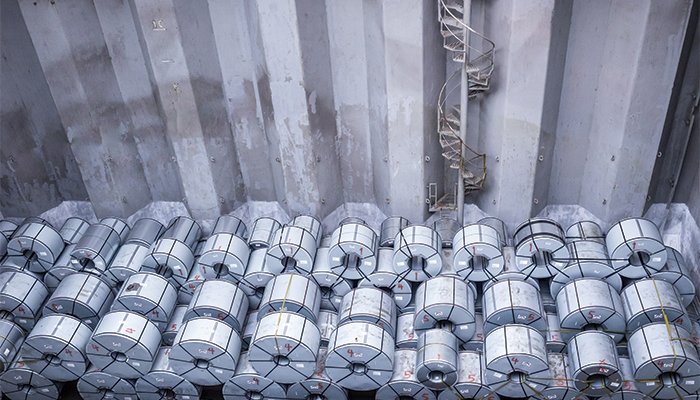 The possibility of US import restrictions hung over the industry throughout 2017 and continued into this year. Photo credit: Shutterstock.

Analysts expect modest increases this year in demand for breakbulk shipments of steel as the industry capitalizes on global economic growth while keeping an ear cocked to protectionist pressures in the United States and elsewhere.

President Donald Trump campaigned on promises to protect US steelmakers from what they say is below-market dumping of product by foreign producers. One of Trump’s first moves as president was to order a Commerce Department investigation under the seldom-invoked Section 232 of the 1962 Trade Expansion Act, a provision that allows the executive branch to restrict imports deemed a threat to military readiness.

The possibility of US import restrictions hung over the industry throughout 2017 and continued into this year. South Korea, the European Union, and other US trading partners have threatened retaliation in response to US tariffs or penalties. Trump’s threats to pull the United States out of the North American Free Trade Agreement (NAFTA) have further clouded the outlook for steel trade.

“All of this is creating a lot of uncertainty, which is not helpful to the markets, to the steel supply chain, to traders, to steel users, to steel producers — it’s just not helpful to anybody,” said Richard Chriss, executive director of the American Institute for International Steel, which represents US companies that use imported steel.

Beneath the fog of politics, steel trade volume depends on underlying demand, which analysts predict will rise modestly in 2018. Anton expects “growth, but tepid growth — anyone expecting 6 percent is going to be disappointed.” The World Steel Association offered a similar outlook, projecting a 1 to 2 percent increase in its most recent semi-annual report.

Steel volumes directly affect fortunes of breakbulk carriers struggling to climb out of a years-long trough of overcapacity and low rates. Steel production also influences demand for iron ore and coal carried by bulk carriers, which compete with multipurpose vessels for some breakbulk shipments.

How global steel demand is supplied in 2018 will depend on a host of factors. These include how China deals with its excess capacity that has necessitated increased exports — riling US and European policymakers — and how far the Trump administration will go in fulfilling its pledges to protect domestic steelmakers.

Trump appeared poised to impose tariffs under Section 232 last June, but a decision was pushed back into this year. The delay followed reported debate between protectionism advocates led by Commerce Secretary Wilbur Ross, a one-time owner of LTV and Bethlehem Steel, and free trade factions who said higher costs would hurt steel-consuming manufacturers and incite retaliation against US exports.

Protectionist sentiment has raised concerns among steel importers. Chriss said tariffs could affect other business sectors, such as US grain shippers whose bulk exports move as backhaul cargo on ships carrying steel imports. “With any trade policy action, there always are unintended consequences and unforeseen consequences,” he said.

Steelmakers in the United States and the European Union began pressuring policymakers to restrict imports several years ago after China, which makes half of the world’s steel, sharply increased its capacity and began flooding the global market with its excess production.

Recent cuts to China’s steelmaking capacity have led officials to say the country has less need to export large volumes of steel. However, most of the cuts have been to inefficient mills that dated to Mao Zedong, and Anton said it is possible some of the idled capacity may eventually be restored. China and many other steelmakers still have low mill utilization rates, he noted.

During the last couple of years, Chinese exports to the United States and the European Union have fallen as a result of tariffs, including US levies of as high as 532 percent, but much of the slack has been taken up by South Korea, Taiwan, Turkey, and other countries.

Steel tariffs tend to be specific to countries, products, and sometimes individual producers, and trade restrictions tend to be “a game of whack-a-mole,” Anton said. “You hit Korea with tariffs on hot-rolled coil, and people will buy that product from Taiwan. You hit Taiwan with tariffs on cold-rolled, and people will buy that from somewhere else.”

With the possibility of US import restrictions looming, buyers have stepped up imports, contributing to a surge in steel imports last year. Imports accounted for 27 percent of US steel consumption during the first 11 months of 2017, according to the American Iron and Steel Institute (AISI). South Korea and Turkey were the top two suppliers during that period. China fell to seventh.

Steel is a key commodity at several US ports, including Houston; Mobile; New Orleans; Brownsville, Texas; Philadelphia-area terminals; and numerous other ports on the US East, Gulf, and West coasts, and the Great Lakes and St. Lawrence Seaway.

US oil and gas drilling and production rose with the development of hydraulic fracturing and directional drilling, which allows long, horizontal wells that require more pipe per drilling rig.

Demand for OCTG waned as oil's price dipped to about $40 per barrel, but rebounded last year as oil prices rose to $60, the US oil and gas rig count more than doubled, and pipe buyers laid in stockpiles as a hedge against import restrictions that might raise prices.

With imports claiming about half of the market for oil field pipe, US steelmakers have sought restrictions — first against China, which a few years ago was the top supplier of US imports, and now against South Korea, which has taken much of China’s US market share.

The future of NAFTA will affect steel trade volumes for ports such as Brownsville and Mobile, each of which handle about 5 million tons of steel imports and exports, including large volumes to Mexico.

At the southern tip of Texas adjacent to the US-Mexico border, Brownsville is linked with Mexico by a heavy-haul truck route. Mobile imports about 3 million tons per year of slabs, many of which are processed into coils or other products and exported, primarily to Mexico.

James K. Lyons, the port authority’s CEO, said he traveled to Washington recently to meet with the US Trade Representative and with Alabama’s congressional representatives to express his concern about the possibility of trade restrictions that might provoke retaliation. “Tariffs and duties would affect our customers’ business. It’s a great concern to us,” he said.

Other ports paying close attention to trade policy include New Orleans, an import gateway for ship-to-barge movements of steel up the Mississippi River, and Delaware River ports that are used by importers in the US Northeast and Midwest.

This is not the first time steel trade restrictions have been an issue. In 2002, former president George W. Bush’s administration imposed tariffs on a number of steel products but rescinded them after complaints from ports, steel-consuming US industries, and business groups.

Steel import restrictions are not unique to the United States. EU officials have levied tariffs and penalties against imports of coils from China, Russia, Brazil, Ukraine, and Iran, causing imports from these countries to decline sharply. Antwerp’s overall iron and steel volume through the first nine months of 2017 was up 7.7 percent, aided by an increase of 190 percent in imports of unfinished iron and steel from India.

Europe’s steel consumption is showing a small increase as the continent emerges from a long recession. Rising prices for EU-produced steel are likely to restrain US steel imports from Europe, at least during the next couple of quarters, Anton said. “The price of imports has to be considerably lower in order to cover the cost of shipping and the two-month lead time,” he said.

China not only produces half of the world’s steel but consumes half of it. China’s infrastructure construction, a top driver of steel demand in recent years, is decelerating. Its auto industry is growing, but not enough to generate a big increase in global demand.

“The lack of a strong growth engine to replace China and a long-term decline in steel intensity due to technological and environmental factors will continue to weigh on steel demand in the future,” the World Steel Association said in its most recent short-range outlook.

US demand is expected to rise slightly, as construction increases modestly while auto production declines slightly from a high base. The Trump administration’s much-discussed government infrastructure program still has not been launched, and any impact from it on steel demand would be years in developing.

Chriss added that he thinks the new US tax law could increase steel demand by promoting economic growth, and that the changes could counter arguments for protectionist measures. “I think the overall health of the domestic steel industry will be boosted far more by a growth-enhancing tax regime than by enacting new trade restrictions,” he said.