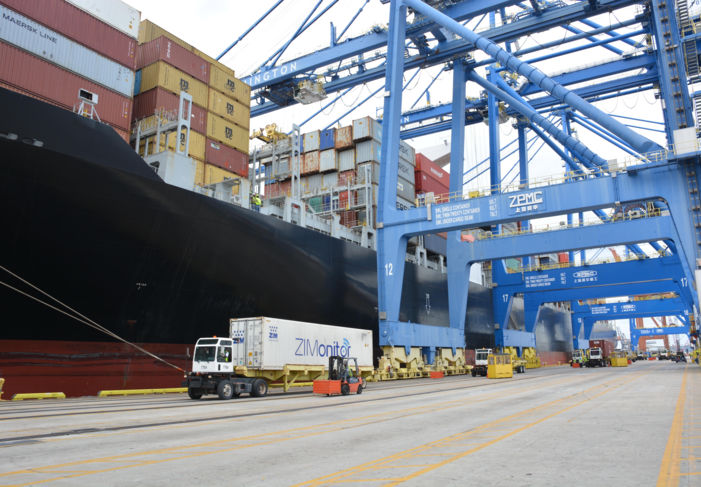 ZPMC cranes in Wilmington, North Carolina. These cranes are subject to a 25 percent tariff under the latest list being reviewed by a division of the US Trade Representative. Photo credit: North Carolina State Ports Authority.

Marine industry leaders are seeking a federal review of a new round of tariffs on Chinese-made goods, lobbying to remove shipping containers and cranes from Section 301 duties.

The 25 percent tariff could add more than $3.5 million to the price tag of cranes, which cost about $14 million, according to the American Association of Port Authorities (AAPA). The 25 percent tariffs on shipping containers would increase costs about $2,000-3,000 per unit.

Last August, ship-to-shore cranes and containers were also on a list of tariffs. After a hard-fought effort, including by J.B. Hunt and Schneider National, containers and cranes were taken off the list.

J.B. Hunt and Schneider argued that not only are there no US options, but they would have to pass on the extra costs of containers to intermodal shippers. There are no US manufacturers of shipping containers or ship-to-shore cranes.

The AAPA said then that tariffs would force East and Gulf Coast ports to reconsider capital expenditures to renovate and expand terminals, projects made necessary to accommodate the post-Panamax vessels arriving from Asia. Mega-ship calls are expected to increase after the IMO 2020 low-sulfur fuel regulation comes into effect on Jan. 1, 2020; scrapping of smaller ships is likely to increase with that mandate.

John Reinhart, CEO and executive director of the Virginia Port Authority, told the committee a 15,300-TEU vessel called at the port in May and said he believes 16,000- to 18,000-TEU vessels will be arriving soon. Reinhart previously told JOC.com that Virginia International Gateway has already handled two post-Panamax vessels simultaneously, and he expects three mega-ships to be worked concurrently one day soon. The port has 12 ship-to-shore cranes capable of handling these ultra-large container vessels.

“The imposition of a 25 percent duty on such high-cost capital equipment [cranes] has the potential to delay our project schedule and increase the overall project cost, thereby adversely impacting the domestic vendors and the project's benefit to the national economy,” he said.

Kurt Nagle, CEO of the AAPA, said ports and private-sector partners are due to spend $155 billion in port infrastructure during the five-year period ending in 2020, but tariffs might create uncertainty for future investments.

“With a cost of up to $14 million per crane, a 25 percent tariff would cost millions of dollars that might otherwise be spent on infrastructure improvements,” Nagle testified. “It would also put American ports at a competitive disadvantage with Canada and Mexico. Ports in those countries can buy cranes to modernize at a significantly lower price if this tariff code remains on the final list.”

China International Marine Containers and Singamas Group build most of the shipping containers for ocean carriers and asset-based intermodal providers. Shanghai Zhenhua Heavy Industries Co. (ZPMC) and Konecranes manufacture virtually all ship-to-shore cranes installed in the US. ZPMC is a Chinese company, and although Konecranes is a Finnish-based company, it has a subsidiary and large factory in Shanghai.

Daniel Drella, Schneider’s director of intermodal safety, testified last August that a 25 percent tariff would cost the industry $64 million in additional capital annually and about $370 million over a five-year period.