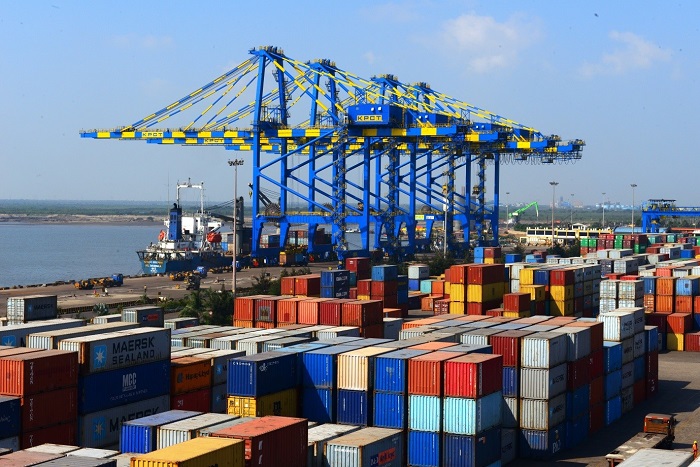 In the recent talks, India and Bangladesh agreed to increase ports of call under the bilateral inland water transit and trade pact. Photo credit: Krishnapatnam port.

India and Bangladesh have signed a slew of supplementary agreements to streamline/bolster inland and coastal trade connectivity between the neighboring nations, and the two also agreed to hold another round of talks in December to accelerate shipping cooperation.

At the most recent talk in New Delhi, India Shipping Secretary Gopal Krishna and Bangladesh counterpart Abdus Samad agreed to increase ports of call, on each side, under the bilateral “inland water transit and trade” pact, according to a joint statement.

The announcement stated that the ports of Chittagong and Mongla in Bangladesh will be used for handling cargo to/from India. In addition, specific protocols have been put in place to include the port of Dhubri in Assam, India, and the port of Pangaon in Bangladesh as additional ports of call.

Further, selected river terminals have been identified as new ports of call, including: the Rupnarayan and the Kolaghat in West Bengal, India; and the Chilmari in Bangladesh. Other river routes also are under consideration to enhance connectivity between India’s northeastern states — particularly West Bengal and Assam — and ports in Bangladesh.

To that end, both sides are considering developing Jogighopa, a small town close to the Brahmaputra River in Assam, as a logistics hub/transshipment point for cargo moving from Bangladesh to Assam, Arunachal Pradesh, Nagaland, and Bhutan. In addition, the Munshiganj River terminal in Bangladesh will be used as a customs station to handle third-party export/import cargo via the port of Kolkata in India.

“To bring about a significant reduction in logistics cost and faster delivery of Bangladesh export cargo, the Indian side raised the point regarding permitting ‘third country’ exim [export-import] trade under the coastal shipping agreement and PIWTT [protocol on inland water transit and trade] by allowing transshipment through ports on the east coast of India,” the statement said. “Bangladesh agreed to hold stakeholder consultations and revert on the matter.”

More importantly, stakeholders held consultation regarding the inclusion of more Indian ports — Dhamra, V.O. Chidambaranar (Tuticorin), and Kamarajar (Ennore) — under the two-way coastal shipping pact, and have decided to address this issue during the scheduled December meeting.

The Indo-Bangla renewed coastal shipping agreement, signed in June 2015, is designed to eliminate regulatory and bureaucratic hurdles to maritime trade between the two nations, which prior to the pact relied on transshipment from the port of Colombo, Sri Lanka, and Singapore for transport of cross-border freight.

With India’s liberalized cabotage program enacted May 21 — intended to generate more transshipment cargo at domestic ports — authorities believe that the eastern ports of Kolkata and Haldia are favorably positioned to attract cargo from Bangladesh via inland waterway options for transshipment, but no reciprocal commitments are said to have come from Dhaka thus far.