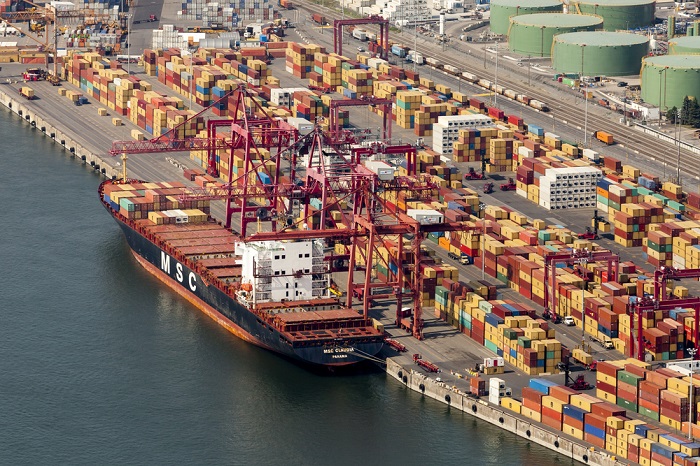 The Comprehensive and Progressive Agreement for Trans-Pacific Partnership, which took effect Dec. 30, is also expected to boost Asia-Canada trade of US auto components, both imports and exports. (Above: The port of Montreal.) Photo credit: Shutterstock.com.

Intra-Asia container volume is poised to expand further, thanks to an Asia-focused trade pact that includes Vietnam, Malaysia, and Japan, and that better-positions Canadian agriculture exporters to feed Asian markets.

The Comprehensive and Progressive Agreement for Trans-Pacific Partnership (CPTPP), which took effect Dec. 30, is also expected to boost Asia-Canada trade of US auto components, both imports and exports. Intra-Asia volume will rise 5.1 percent to 5.8 percent in 2018, and hit 33.6 million TEU, retaining its rank as the largest single global trade lane.

Port and logistics consultant Jonathan Beard said, “I would expect several Canadian export sectors to benefit from the CPTPP, especially farm and food products, with the most significant growth being to markets in Vietnam, Japan, Australia, and Malaysia.”

“There would be positive knock-on impacts for the westbound trans-Pacific box trade,” Beard added. He was head of transportation and logistics consulting in Asia for consultancy Arcadis.

Beard’s comments were echoed by maritime consultancy Drewry, although the non-inclusion of both the United States and China in the trade pact would dampen the opportunities for the box trades.

“In Drewry’s opinion, CPTPP will likely have a positive impact on containerized trade, although less than originally envisioned considering the non-participation of the US and China,” said Simon Heaney, Drewry senior manager, container research, told JOC.

“Amid the tariff uncertainty of the Trump administration, CPTPP will assist other Asian economies as they seek to diversify export markets to offset possible losses in the ongoing US-China trade war,” he said.

The CPTPP entered into force on December 30 between the first seven countries to have ratified the agreement — Australia, Canada, Japan, Mexico, New Zealand, Singapore, and Vietnam. Four other nations — including Brunei, Chile, Malaysia, and Peru — will join once they have ratified the deal, creating a tariff-free trading bloc representing 495 million consumers and 13.5 percent of global GDP.

Sounding a note of caution, ACL’s Lim said, “Not to be overly optimistic about things, we still need patience for such positive developments to take place at the working/trade level. The effect of full implementation will come in the coming years.”

But Canada is among the countries upbeat about the positive impact on trade.

“The CPTPP will help Canadian businesses of all sizes to access these thriving markets, contributing to their economic growth, more opportunities for the business community and the middle class, and the creation of well-paid jobs here in Canada,” said Jim Carr, minister of International Trade Diversification, after Canada ratified CPTPP at the end of October.

The pact will give the Canadian agricultural sector preferential market access to all CPTPP countries, including in Japan, Vietnam, and Malaysia, where Canada previously faced high tariffs and no preferential access. This includes exports of meat, grains, pulses, maple syrup, wines and spirits, and processed food.

The deal also eliminates tariffs on all Canadian exports of vehicles and parts to CPTPP markets within 12 years of entry into force. Canada will also scrap its 6.1 percent tariff on imported passenger vehicles from all CPTPP countries over four years.

The Canadian Agri-Food Trade Alliance (CAFTA), which represents about 90 percent of Canada’s export-focused farming and ranching industry, estimated the CPTPP will boost agri-food exports to CPTPP countries by C$2 billion ($1.51 billion), or 25 percent.