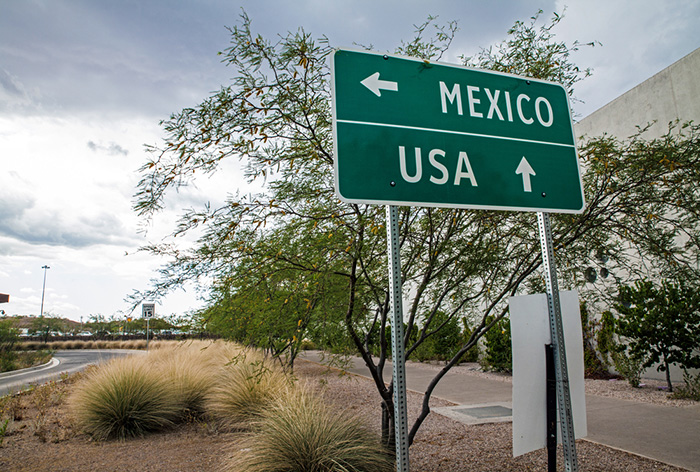 One of the many points of uncertainty regarding trade under President-elect Trump is how the US could leave or renegotiate NAFTA.

MEMPHIS, Tennessee — FedEx Freight President Michael L. Ducker had an unenviable job the morning after the election: defending the Trans-Pacific Partnership. "Trade agreements are the solution, not the problem," Ducker said in his keynote speech to the 2016 JOC Inland Distribution Conference, which opened in Memphis, Tennessee on Election Day. FedEx, a $50.4 billion company built on global trade, is “100 percent committed to the Trans-Pacific Partnership," Ducker insisted.
“This country needs TPP. Our customers will benefit from TPP,” he said. “TPP will eliminate tens of thousands of foreign tariffs added onto American-made products.” At the same time, he acknowledged that supporters of trade agreements such as the TPP and the North American Free Trade Agreement have a tough fight ahead of them following the election. Not only is the TPP effectively dead, existing trade deals such as NAFTA are likely to be reworked.
During his campaign, President-elect Donald J. Trump called NAFTA “the worst trade deal in history” and said he would renegotiate or scrap the trade pact. He also said the US would withdraw from the TPP. He may owe his victory in states such as Michigan, Wisconsin, Ohio and Pennsylvania in large part to anti-NAFTA sentiment. Can or will he deliver on those promises?
When it comes to NAFTA, “It’s not as easy as he thinks it is,” Jonathan Gold, vice president of supply chain and customs policy at the National Retail Federation, said at the JOC conference. “Will Mexico and Canada come to the table? We can’t just withdraw unilaterally,” Gold said.
The trouble is, perhaps we can. Article 2205 of NAFTA allows any of the parties to the treaty to withdraw from the agreement “six months after it provides written notice of withdrawal to the other parties.” Although Congress had to approve NAFTA, the language of the agreement itself doesn’t state Congress would have to approve the withdrawal from the 22-year-old treaty.
There’s debate, however, over whether President-elect Trump could withdraw the United States from NAFTA simply by writing a letter to Mexican President Enrique Peña Nieto and Canadian Prime Minister Justin Trudeau on his first morning in the White House, or wherever he chooses to work. Congress certainly would want a say in the matter, and laws implementing NAFTA would remain on the books. The most likely and immediate result would be litigation.
Companies involved in cross-border trade will want a say, too. “Our members are major importers, and what we’ve heard in the trade debate is concerning,” Gold said. “If we want to look at how to make the economy good, we can’t shut our borders.”
“We have an awful lot of trucking and do an awful lot of cross-border trucking as well,” Sharon M. Perry, vice president of logistics for apparel company Carhartt, told the JOC conference. “We have more questions than answers about what’s ahead of us.”
Other speakers at the conference insisted the wheels crossing the US border would keep turning, whether on highways or rail lines. Truck crossings at the US-Mexican border increased 5.5 percent in the second quarter, the latest period for which information is available from US Bureau of Transportation Statistics. At Laredo, Texas, the largest US border crossing point for trucks, truck traffic rose 4.4 percent in the quarter to 536,312 crossings.
“There’s going to be a focus on trade actions and trade enforcement,” Gold said. “It’s incumbent on all of us in the global trading regime to talk about why this is important to us.”
Since the election, Trump’s hardline talk has already had some results. Trudeau and Peña Nieto have already expressed willingness to discuss retooling NAFTA. Article 2205 may be a card Trump won’t have to play. And re-evaluating NAFTA while looking for ways to improve the pact may not be a bad idea, a few speakers suggested. A lot has changed since the 1990s, said Laura Hernandez, senior business manager for intermodal at Union Pacific Railroad.
“It’s like a marriage that’s lasted 22 years, and the kids are grown,” said Hernandez, who is Mexican. She’d like to see an agreement that helps lift more Mexican workers out of poverty. According to Trading Economics, the average wage in Mexico decreased in September to 316.57 pesos per day, which currently would translate to $15.32 per day or $1.92 per hour.
Contact William B. Cassidy at bill.cassidy@ihsmarkit.com and follow him on Twitter: @wbcassidy_joc
Regulation & Policy›Trade Policy›US Trade Agreements
Rail & Intermodal
Regulation & Policy›Trade Policy
Regulation & Policy›Trade Policy›International Trade Agreements
Regulation & Policy›Trade Policy›International Trade Policy
Trucking Logistics
North America
North America›Canada
North America›Mexico
North America›United States
Regulation & Policy›Trade Policy›US Trade Agreements
Rail & Intermodal
Regulation & Policy›Trade Policy
Regulation & Policy›Trade Policy›International Trade Agreements
Regulation & Policy›Trade Policy›International Trade Policy
Trucking Logistics
North America
North America›Canada
North America›Mexico
North America›United States