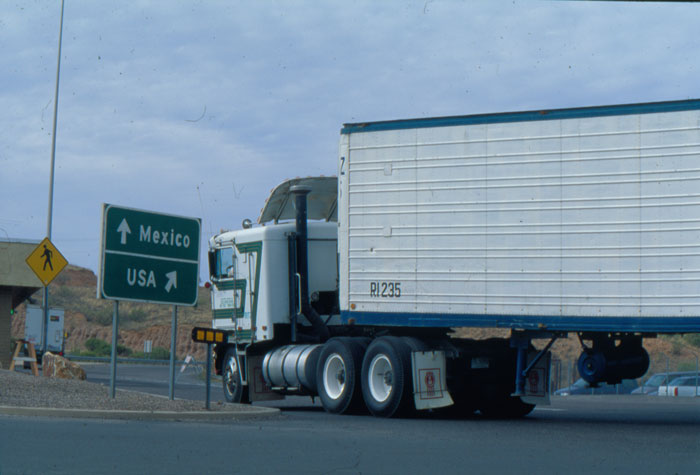 WASHINGTON — Even if the Teamsters fail to overturn a recent federal decision to allow Mexican motor carriers to haul loads past the border region, the impact of the new program may be negligible anyway.

The majority of U.S.-Mexico cross-border trade is shuttled over the border region, and interest from Mexican trucking companies in hauling goods farther inland and back to Mexico has received scant interest. To date, the Federal Motor Carrier Safety Administration has received just four applications from Mexican trucking firms after the agency announced in January that Mexican drivers could apply to move loads into the U.S. and back to their home country. The move brought the United States into compliance with the North American Free Trade Agreement that's been in effect for two decades.

The four applications is a paltry sum compared to the number of qualified motor carriers in Mexico that could participate, given the program is open to all interested parties. It’s also considerably less than the 15 motor carriers that previously participated in a FMCSA three-year pilot — a pilot meant to test the stability of the very program now in dispute.

Nevertheless, the Teamsters Union has refused to back down. The International Brotherhood of Teamsters, alongside the Advocates for Highway and Auto Safety and the Truck Safety Coalition, filed a joint suit March 10 against the U.S. Department of Transportation, aiming to keep Mexican trucks out.

The groups contend in the suit that the data gleaned from the three-year FMCSA study used to support the new program “is arbitrary and capricious in light of the admitted lack of significant data.” The suit cites the DOT Inspector General Calvin Scovel’s own assessment of the three-year pilot study, in which he concluded the number of participating carriers was insufficient to “determine with confidence” the potential of a future cross-border program.

FMCSA decided to pursue the program in spite of the evidence on hand, said Teamsters General President Jim Hoffa.

“I am outraged that the Department of Transportation has chosen to ignore the findings of the DOT inspector general and is moving forward with a plan to open the border to Mexican trucks in the coming months,” Hoffa said in a statement shortly after the FMCSA announced the program was open to applicants in January.

Hoffa said the cross-border program not only ignores statutory and regulatory requirements, but also flies in the face of common sense.

“One thing was made clear in the IG’s report – the pilot program was a failure,” Hoffa said. “Allowing untested Mexican trucks to travel our highways is a mistake of the highest order and it’s the driving public that will be put at risk by the DOT’s rash decision.”

The dispute has put the teamsters at odds with the American Trucking Associations, the largest trade association for the U.S. trucking industry.

McNally said the ATA has declined to “get into the weeds” on the number of current applications or participants in previous pilot studies. Instead, the ATA has emphasized the sheer economic value of the cross-border trucking program.

Not only will the program bring the U.S. into compliance with NAFTA provisions, but the policy change is expected to open trade between the two border countries and lead to the permanent termination of the more than $2 billion in annual retaliatory tariffs on U.S. goods.

“Trucks move more than 65 percent of all transnational trade between the U.S. and Mexico,” the ATA said in a statement. “In order to keep our economies efficient and growing, we continue to support our government’s efforts under NAFTA.”

The latest lawsuit is not the first nor the only dispute between the teamsters and the federal agency, McNally said, and U.S. operating authority for Mexican carriers has long been a controversial matter.

Since NAFTA went into effect in 1994, the U.S. has technically been required to allow cross-border trucking beyond established border areas. However, opposition from organized labor, led by the Teamsters, and safety advocacy groups, kept Mexican trucks from traveling beyond a narrow border commercial zone.

In 2007, the Bush administration opened a pilot project that admitted a limited number of Mexican trucking firms. There wasn’t a single crash involving any of the Mexican participants and violation rates for the Mexican trucks and drivers were less than those based in the U.S., according to online newsletter InsideFMCSA.com.

Two years later, Congress would later de-fund the Bush program at the behest of the Teamsters Union among others. The Mexican government protested and imposed a punitive tariff on all U.S. agricultural and manufactured exports — a tariff that was later sanctioned under a NAFTA arbitration which found the U.S. in violation of the treaty.

Rep. Peter DeFazio, D-Oregon, ranking minority member on the House Transportation and Infrastructure Committee, has been an outspoken critic of the cross-border pilots and program. DeFazio has already said the program may be subject to congressional review as it prepares to renew federal highway funding which expires in May.