US, 11 Pacific Rim Countries Closing In on Trade Pact

US, 11 Pacific Rim Countries Closing In on Trade Pact 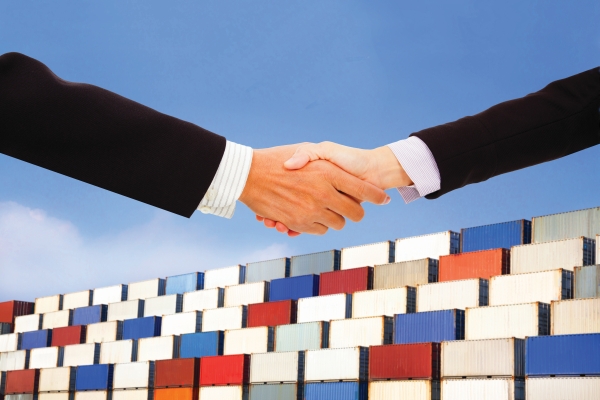 After 20 rounds of talks, the U.S., Japan and 10 other Pacific Rim countries are poised to deliver the text of the far-reaching Trans-Pacific Partnership. The TPP could become reality this year, but will the reality match the hype?

U.S. Trade Representative Michael Froman has described the TPP as a “21st century trade agreement” that “introduces disciplines into the global trading system covering issues like state-owned enterprises and e-commerce.” Because the TPP countries make up a third of global trade, and 40 percent of global GDP, Froman noted, the TPP can ultimately “serve as a platform for regional integration, and support and bolster the multilateral trading system.”

Linda Dempsey, vice president of international affairs at the National Association of Manufacturers, said the industry organization is looking for the TPP to “effectively open markets” by setting high standards for handling such thorny non-tariff barriers as the protection of foreign investment, intellectual property rights and e-commerce.

Only three of the TPP signatories — Japan, Malaysia and Vietnam — don’t have free trade agreements with the U.S., so much of the focus in those negotiations has been on the more traditional issue of tariff reductions. Nevertheless, “each of these three countries has its own unique set of issues,” Dempsey said: sugar in the case of Malaysia, catfish and textiles in the case of Vietnam, and agricultural products — especially grains and beef — in the case of Japan.

The most important of those trading partners is Japan, which has the second-largest economy in Asia after China, which isn’t involved in the TPP talks. For decades, a succession of Japanese governments have resisted opening the country’s agricultural markets, but newly elected Prime Minister Shinzo Abe has roused optimism by asserting his commitment to sweeping regulatory and structural reforms.

Protected by sky-high tariffs, rice is a critically important farm product for Japan’s dwindling community of farmers, whose political power far exceeds their numbers. Like some of his predecessors, Abe has struggled to overcome their fierce opposition to any concessions that would open agricultural markets to imports.

Froman has made it clear the U.S. is looking for a final agreement that resolves the decades-old trade disputes. “We won’t agree to a path that simply sweeps under the carpet our outstanding issues. It is time to finally lay these issues to rest,” he said. “A satisfactory outcome to the bilateral negotiations is required in order to complete the TPP with Japan.”

While the U.S.-led TPP framework aims to eliminate all tariffs, Japan has been seeking to protect its agricultural sector by retaining tariffs on imports of rice, wheat, beef, pork, dairy products and sugar. In October, Froman reportedly told Akira Amari, Japan’s minister in charge of TPP negotiations, that the U.S. wants Japan to eliminate tariffs on all farm products other than rice no matter how long it takes. Amari responded that such an outcome would be impossible.

Japan’s participation also raised the level of political interest in the TPP in the U.S., said Shaun Donnelly, vice president of investment and financial services at the United States Council for International Business. “Once Japan joined, the U.S. agricultural community got interested,” he said. The challenge in these multilateral talks is that “everyone has a slightly different set of priorities.”

Senate Finance Committee Chairman Max Baucus, D-Mont, agreed that Japan would need to make some tough political decisions on agriculture. “Keeping products off limits is not a pathway to ambition,” he said.

In Malaysia, the minister of trade and industry stressed his nation’s interest in such issues as safeguarding the interests of its Bumiputera (native Malay-owned) and other small and midsize enterprises, and providing Malaysian companies with adequate access to government procurement contracts.

In Vietnam, which could expand its share of the U.S. textile market as a result of the trade agreement, another major  issue has been a pending catfish-inspection program at the U.S. Department of Agriculture that would replace an existing system in the Food and Drug Administration. American catfish farmers say the costly new program would be more rigorous than the FDA’s and is needed to ensure  all domestic and imported catfish is safe to eat.

Vietnam, a large catfish exporter, says it’s nothing more than a trade barrier in disguise. A senior Vietnamese official called the new inspection program “a thinly veiled attempt designed to keep out fish from countries like Vietnam.” Vietnamese trade officials wrote to Secretary of State John Kerry, the White House and members of Congress and threatened trade retaliation if the program wasn’t repealed.

“Our government is unwilling to sit by as this program is implemented,” the trade officials wrote, adding that U.S. exports of beef, soybeans and other goods to Vietnam could suffer as a result.

In those countries and elsewhere, the TPP’s provisions for treating state-owned enterprises are new territory for U.S. trade pacts. “There were no SOEs in (earlier U.S. trade pacts in) Latin America, and this is completely new” in Asian trade agreements, said David Lewis, vice president of Washington-based consulting firm Manchester Trade. “There are very few experts about SOEs, so it is all learn as you go” because state-owned enterprises play a major role in Vietnam.

Much like other major trade agreements, the TPP negotiations have drawn accusations from Republicans and Democrats that they have been left largely in the dark about the details and complexities. A number of House Democrats — led by Connecticut’s Rosa DeLauro and California’s George Miller — also have voiced reluctance to approve a renewal of trade promotion authority, known as fast-track, which would require Congress to vote straight up or down on the text of the TPP.

In a letter to President Obama, the representatives said they would oppose trade promotion authority “or any other mechanism delegating Congress’s constitutional authority over trade policy that continues to exclude us from having a meaningful role in the formative stages of trade agreements and throughout negotiating and approval processes.” Separate TPA bills were introduced in the House and Senate this month.

House Ways and Means Chairman Dave Camp, R-Mich., meanwhile, has criticized the Obama administration for failing to consult with Congress on whether disciplines on currency manipulation should be included in trade agreements. The administration’s unwillingness to engage with lawmakers on the “politically and economically important” issue of currency manipulation, Camp warned, “will undermine support for TPP and could delay our ability to conclude TPP.”

What difference will it make that the TPP agreement did not emerge during 2013? Technically speaking, any specific deadline is arbitrary, but a more timely completion of a TPP draft might have given further encouragement to negotiators involved in the earlier stages of a wide-ranging free trade pact between the U.S. and the 28-nation European Union.

Deregulating trans-Atlantic trade would create the world’s largest free trade area, primarily by reducing barriers in such sectors as services, foreign investment and regulatory issues. The TPP texts on these issues could serve as a template, some trade analysts believe.

Another consideration is the psychological toll of further delay. Donnelly said the experience of the moribund Doha Round of World Trade Organization negotiations “scares” many people who had high hopes for wide-ranging, multinational trade pacts during the past decade.

Launched in November 2001, the Doha Round gradually disappeared from radar screens after being postponed repeatedly. The logic behind setting a calendar deadline for TPP, Donnelly said, is, “Don’t let this just hang on. Let’s set a deadline” so that people are compelled to “come to the table with their final offers.”

Beyond that, this is also an election year in the U.S., further complicating the political equation of gaining popular support for the TPP. “But getting people to put their cards on the table first is really hard,” Donnelly said, referring to the proposals of national negotiators.

Assuming it’s ultimately approved, will the TPP really open new markets for U.S. exporters? Although it will lower tariffs with Japan, Malaysia and Vietnam while setting higher global standards for moving goods and services across multiple borders, there are no guarantees it will be a panacea. After all, “We live in a very tough, competitive world,” Dempsey said.

This much is clear, she adds: U.S. exporters need to operate in a global environment where treaties such as the TPP not only create but enforce higher standards governing investor-state provisions, state-owned enterprises, phytosanitary regulations and intellectual property protection.

Besides, she said, “If the U.S. does not join such an agreement, other countries will join it, and we will be left increasingly on the sidelines.”