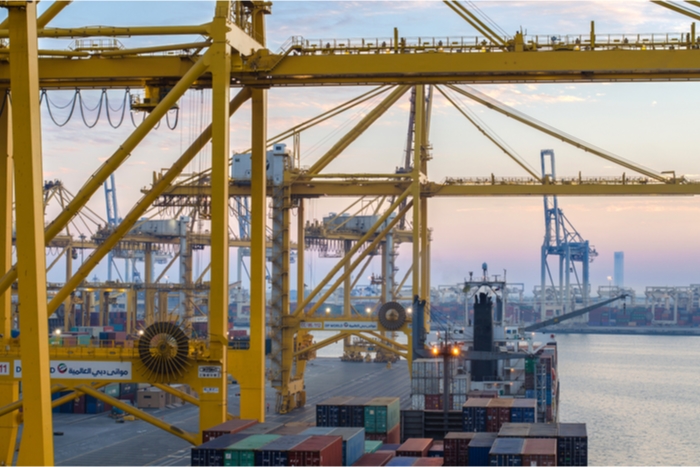 In one of the first prosecutions of the high-sulfur carriage ban, an MSC vessel has been banned from the UAE after calling at the port of Jebel Ali with non-compliant fuel on board. Photo credit: Shutterstock.com.

Mediterranean Shipping Co. said it is puzzled by the presence of high-sulfur fuel oil (HSFO) on board the MSC Joanna during port calls at Jebel Ali last week, a violation of new International Maritime Organization (IMO) rules that has left the vessel banned from UAE waters for a year and its captain facing prosecution.

“We are closely investigating how it came about that the traditional marine fuel for exhaust gas cleaning systems (EGCS) installation testing was left on board the MSC Joanna in a sealed tank during its recent UAE port calls, as EGCS installation on this vessel has been delayed several months this year,” an MSC spokesperson told JOC.com Tuesday.  “MSC Joanna has used only compliant low-sulfur fuel since IMO 2020 came into effect.”

According to the UAE’s Federal Transport Authority, the 9,200 TEU MSC Joanna failed to debunker 700 tonnes of high-sulfur fuel before calling Jebel Ali on March 6, despite being given repeated warnings. The vessel then called at the UAE port of Khalifa, with a second call at Jebel Ali on March 13.

The global shipping industry since Jan. 1 has been required to comply with the IMO 2020 mandate that caps sulfur emissions of bunker fuels at 0.5 percent, down from 3.5 percent. To comply, carriers can burn very low-sulfur fuel oil (VLSFO), marine gasoil (MGO), or install emissions-cleaning scrubbers to continue using high-sulfur fuel.

No scrubbers, no high-sulfur fuel

Carriers were given a grace period of sorts before a ban on the carriage of non-compliant fuel came into effect March 1. Since then, only ships fitted with exhaust gas cleaning systems, more commonly known as scrubbers, can carry fuel with a sulfur content higher than 0.5 percent.

Doubts were expressed in the run-up to the carriage ban of the ability of IMO member states to enforce the rule, but the prosecution of the MSC Joanna is an indication that enforcement is being taken seriously, at least in some locales.

The MSC spokesperson expressed the carrier’s commitment to the low-sulfur fuel rules. “MSC is fully committed to implementing the UN IMO 2020 low-sulfur regime and all vessels requiring compliant fuel were supplied in advance of the implementation date, including MSC Joanna,” he said. “MSC has also made — and is still making — significant investments in the fleet with the installation of IMO-approved exhaust gas cleaning systems.”

The huge demand for scrubber installations was already leading to lengthy delays at Chinese yards before the onset of the coronavirus disease 2019 (COVID-19), which further lengthened waiting times. Sea-Intelligence Maritime Consulting estimated about 200,000 TEU of capacity would be taken out of service for scrubber installation in 2020, but the 2019 scrubber-equipped vessels sailing back into service would replace much of the withdrawn tonnage.

Global Shipping Outlook: A Sneak Peek at 2021
Port Performance North America: Managing Cargo Flow During a Pandemic — and Beyond
END_OF_DOCUMENT_TOKEN_TO_BE_REPLACED