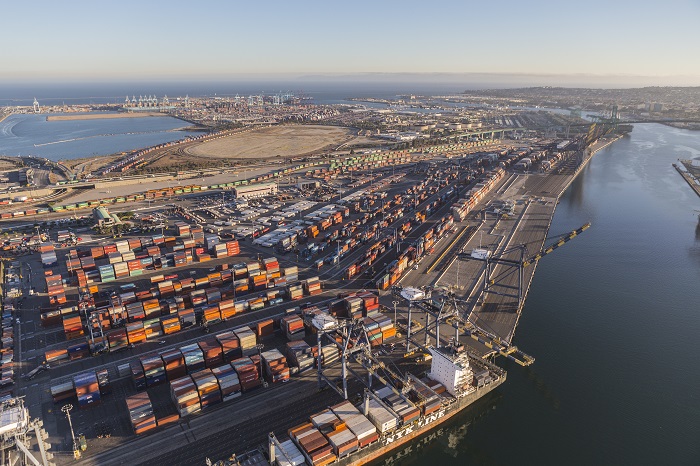 It is an ambitious goal, but port officials, environmental experts, and other stakeholders at a summit offered substantial evidence that the commercially-feasible, zero-emissions, cargo-handling system will arrive sooner than many expect. (Above: the Port of Los Angeles.) Photo credit: Shutterstock.com.

Port officials and equipment manufacturers gave beneficial cargo owners (BCOs) a measure of assurance Thursday that the ambitious goal of deploying zero-emission cargo-handling equipment in Los Angeles-Long Beach by 2030 will be technologically and commercially achievable.

Zero-emission cargo-handling equipment, by definition, means rubber-tired gantry cranes, container top-handlers, and yard tractors that are either plug-in or battery-powered electric. The technology to electrify all such units has not yet been perfected, but equipment manufacturers and power companies believe the industry is far enough along in the development and testing stages to make the ports’ 2030 goal achievable.

“Technology moves rapidly. We will see rapid adoption of electricity,” said Damon Hannaman, senior account manager at Southern California Edison. SCE supplies electrical power to the Port of Long Beach, and Hannaman said a key component of the equation, the electric power infrastructure, is already mostly in place thanks to the port’s decision under the 2006 Clean Air Action Plan to operate ocean vessels from shoreside electrical power.

Once again, LA-LB sets the pace

Based upon previous initiatives in Southern California such as the 2006 clean-truck program, extended gates, and trucker appointments, it is likely that the zero-emission cargo-handling equipment deployed in the largest US port complex will be adopted by other North American ports as well. Equipment manufacturers say the Southern California port complex is big enough on its own to make it worth their while to develop zero-emission equipment for that market. “Los Angeles-Long Beach is a market-maker,” said David Gully, regional/intermodal sales manager-Western region at Taylor Machine Works, whose products include top handlers.

The ports’ criteria for a successful zero-emission equipment program are that the cargo-handling units must be operationally effective, commercially available, economically viable, and supported by the necessary power infrastructure, said Heather Tomley, director of environmental planning at the Port of Long Beach.

Various types of cargo-handling equipment are already in the development or testing stages in Los Angeles-Long Beach. Full adoption of this technology will require extensive testing of the equipment in the rigorous port environment, Tomley said. The ports in the coming year are partnering with equipment manufacturers and terminal operators to conduct feasibility assessments on dozens of units, including street trucks as well as RTGs, top-handlers, and yard tractors, she said.

The neighboring ports of Los Angeles and Long Beach, in the 2017 update of their joint Clean Air Action Plan (CAAP), set goals of achieving zero-emission cargo-handling equipment by 2030 and trucks by 2035. Under the CAAP, those are goals for new equipment. Since cargo-handling equipment has life spans of 10 to 15 years, units deployed in the coming years that are compliant with the requirements in effect at the time will be allowed to live out their useful lives even if that means operating beyond the target years for zero emissions.

Top-handlers, also known as top-picks, are used to lift loaded containers into and out of the stacks. They represent 90 percent of the individual cargo-handling units at the 12 container terminals in Los Angeles-Long Beach, said Larry Nye, vice president of Moffatt & Nichol. That equipment will have to be battery-powered in order to be zero-emission, and he estimated the terminals in the port complex will need a total of 425 top-picks in 2030 given current cargo volume projections.

Gully said Taylor Machine Works is developing a battery-powered top-pick that can work two consecutive eight-hour shifts before requiring recharging. The complete recharging takes five to six hours. Top picks are “big machines” that can accommodate the large batteries needed to power them for two work shifts, he said.

Yard tractors, which are used to move containers from the ship-to-shore crane to the stacks, must also be powered by batteries in order to be zero-emission. Nye said the two ports by 2030 will need about 1,000 yard tractors. Capacity, part of the REV Group, is developing a battery-powered yard tractor that will be priced about $250,000, said Vincent Illia, regional sales manager-West Coast. That compares with $160,000 for an liquefied natural gas (LNG), near-zero emission, unit and about $100,000 for the standard diesel-powered yard tractor.

When operation, maintenance, and repair costs over the life of the equipment are included in determining the viability of electric and battery-powered equipment, port engineers calculate that since electrical power is cheaper than diesel, and the equipment, with fewer moving parts, incurs lower M&R costs than diesel units, the industry will find that zero-emission cargo-handling equipment and trucks may in fact be less costly to operate over the life of the units.

BYD, a manufacturer of electric trucks, has 10 Class 8 trucks operating in California and received an order for 28 to be deployed in the Port of Long Beach, said John Gerra, director of business development. The trucks can be driven for two shifts and will experience no significant constraints in harbor-area work, he said.

To be commercially and economically viable, zero-emission cargo-handling equipment must be produced in large enough quantities to bring the price down. “Cost is always an issue. We’re a niche market, which means there are not a lot of suppliers,” said Eric Bayani, director of marketing and contracts at International Transportation Service, which operates the “K” Line terminal in Long Beach. Bayani said ITS has participated in pilot projects for green technologies since 2006, although the next step to zero-emission cargo-handling equipment will be a “game-changer,” he said.

The ports of Long Beach and Los Angeles recognize the steep costs involved in developing, piloting, certifying, and implementing new technologies. The ports have and will continue to work with state and federal agencies to secure demonstration grants with the intention of bringing zero-emission equipment to commercial production, Tomley said.

The ports in their clean-air efforts are attempting to achieve a balance between commercial viability and environmental sustainability, said Chris Cannon, director of environmental management at the Port of Los Angeles. The port authorities are taking the lead in developing the electrical power infrastructure that will be needed to power a zero and near-zero emission port, he said.

Near-zero emission equipment, such as units powered by LNG or propane, are already in use. They not only serve as interim options while zero-emission technology is being developed, but they can also guarantee resiliency in times of emergency when the power grid is compromised. Cannon said it is likely the port community will need at least two types of power to maintain resiliency.

A major challenge in implementing a comprehensive program like the CAAP is to engage in long-term planning to 2020 or 2035 and beyond without knowing for sure what technologies will be commercially viable, Cannon said. For that reason, the ports will continue to meet regularly with the terminals and the equipment manufacturers and revise the equipment projections every two or three years.

Initial estimates are that terminal operators will incur a cost of $4 billion to deploy the zero-emission cargo-handling equipment by 2030 that is called for in the CAAP. The ports, which must invest about $2 billion in supporting infrastructure, must work with the private sector and with government agencies for grants to ensure that they do not lose market share in the competitive port industry as they move toward a zero-emission port complex, said Thomas Jelenic, vice president of the PMSA.