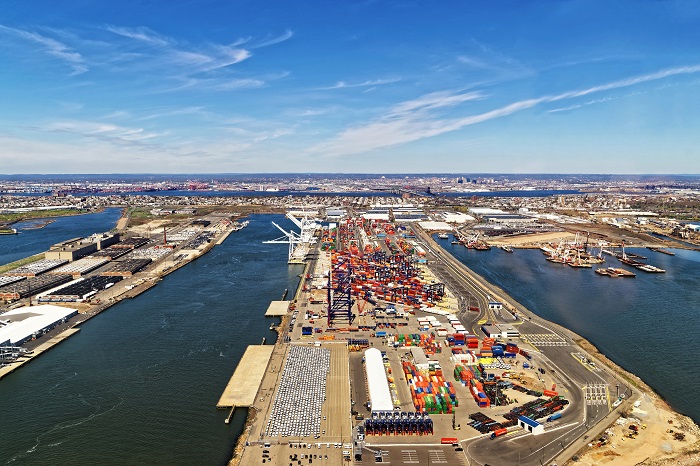 The International Longshoremen's Association and New York Shipping Association accuse the commission of overstepping its authority to combat crime on the docks, and say the commission’s effort to oversee hiring in the port causes delays and disruption. The Waterfront Commission says its work is necessary, and it is merely carrying out its responsibility to fight racketeering and ensure fair hiring, in part by promoting diversity. (Above: The Port of New York and New Jersey.) Photo credit: Shutterstock.com.


A federal judge Friday temporarily halted, via a preliminary injunction, the effort by New Jersey’s governor and legislature to terminate a 65-year-old agreement giving the Waterfront Commission of New York Harbor the power to do background checks and criminal investigations at the Port of New York and New Jersey.

Judge Susan D. Wigenton, in US District Court in Newark, ruled that New Jersey’s governor, Phil Murphy, could not enforce a law that would end the commission’s investigative authority in the port and transfer those powers to the New Jersey State police.

The law and the complaint suit are the latest salvos in the ongoing dispute between the commission on one side, and on the other the New York Shipping Association (NYSA) and the International Longshoremen’s Association (ILA), over the commission’s role in the port, which has played out in recent years in legislative, regulatory, and court venues over hiring and other issues.

The ILA and NYSA accuse the commission of overstepping its authority to combat crime on the docks, and say the commission’s effort to oversee hiring in the port causes delays and disruption. The Waterfront Commission says its work is necessary, and it is merely carrying out its responsibility to fight racketeering and ensure fair hiring, in part by promoting diversity.

Commission argues both states must pass an identical law, to be binding

Past legislative efforts to reduce the commission’s power have not become law. And even if they had, they would have had no impact — according to commission supporters — unless New York State’s legislature passed an identical law, which they have not. In the latest case, however, New Jersey legislators argued that the state could withdraw unilaterally from the bi-state compact. About 90 percent of the port’s container volume goes through New Jersey, where the four biggest of the port’s six terminals are located.

Former governor Chris Christie signed the law on Jan. 16, his last day in office, eight days after the New Jersey legislature sent the bill to his desk. The law gave the state’s governor, now Murphy, 30 days to enforce the law and state his intention, or not, to withdraw from the commission.

Before he could do so, the Waterfront Commission filed suit, arguing that the compact creating the commission, which was approved by Congress and signed by former president Dwight D. Eisenhower, cannot be dismantled without the consent of either New York State or Congress. Neither has done so, as of yet.

Murphy and both houses of the New Jersey legislature responded by filing a motion to dismiss the commission’s case, in part because the commission executive director filed suit without securing the approval of the two-person commission.

Wigenton’s ruling denied the motion to dismiss, and granted a preliminary injunction preventing the state of New Jersey from withdrawing from the interstate compact while the initial complaint filed by the commission is heard.

Walter Arsenault, executive director of the Waterfront Commission, said the ruling “sends a clear and unmistakable message that New Jersey has acted illegally in seeking to unilaterally withdraw from a congressionally approved interstate compact.” The ruling “safeguards the Waterfront Commission’s ability to continue its critical mission of combating corruption and ensuring fair hiring practices in the Port of New York-New Jersey,” he added.

Leland Moore, spokesman for the New Jersey Office of the Attorney General, said “We are reviewing our legal options.”

the NYSA with input from the

Permalink Submitted by TAVANZATO on Jun 4, 2018 3:31PM EDT
the NYSA with input from the MTO's should be the ones to determine how many ILA jobs are needed. since they hired the 700+ the port has been running the smoothest it has in years. let the local folks who are in charge of this be the one's to decide and no need to add a layer of government red tape. seems to me the WC served a purpose in a different day and age, this is 2018 and the NYSA has played a huge roll in the PPTF and all aspects of the huge success. as a historical critic of the port and it being a source of many grey hairs, really good to see it running well
Regulation & Policy
Port News›Longshoreman Labor›International Longshoremen’s Association
Port News›Longshoreman Labor›New York Shipping Association
Port News›Longshoreman Labor›Waterfront Commission of New York Harbor
Port News›US Ports›Port of New York and New Jersey
North America
North America›United States
North America›United States›New Jersey
North America›United States›New York