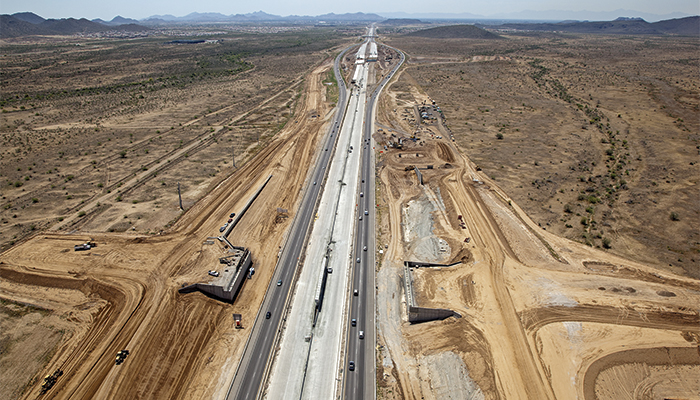 Everyone’s for infrastructure. If there was one thing Republicans and Democrats agreed on during the 2016 US election, it was increased support for port, waterway, and highway investments aimed at boosting economic growth.

Now the trick will be to convert the campaign rhetoric into something tangible. After taking a backseat to healthcare and taxes during President Donald Trump’s first year in office, infrastructure is shaping up as a big issue for early 2018.

Trump promised a $1 trillion infrastructure program during his campaign, but details have been sparse. Industry advocates expect details to emerge during the next few weeks. “I’d say the odds are that when the administration issues its budget proposal in February, we’ll see a lot more flesh put on the outline of what the administration wants,” said Paul Bea Jr., principal at Washington-based PHB Public Affairs.

Trump administration officials have suggested their infrastructure proposal will rely heavily on leveraging of federal funds to attract increased private investment. They have also indicated that only $200 billion or so will go for transportation. The rest will likely be ticketed for myriad non-transportation projects, such as rural telecommunications, flood control, and water treatment.

The administration proposed cutting popular freight programs such as TIGER grants, though it is unclear how those programs will fare during the coming year. Industry officials, however, are hopeful that lawmakers can avoid partisan bickering and provide meaningful infrastructure funding.

Any major legislation probably would need to be passed by August, when Congress recesses in advance of November’s mid-term elections. The 2016 version of the Water Resources Reform and Development Act (WRRDA) was passed during a December lame-duck session, but that was unusual.

The 2016 water resources bill consisted mainly of tweaks to the landmark 2014 WRRDA legislation, which featured such changes as a formula for increased spending of the $9 billion surplus in the Harbor Maintenance Tax Fund, which is supposed to support navigation projects but has been tapped repeatedly for other uses.

Rep. Bud Shuster, R-Pa., chairman of the House Transportation and Infrastructure Committee, has said WRRDA’s 2018 version will likely be a “pamphlet bill” addressing a limited number of issues, although it could be converted into a vehicle for broader infrastructure legislation.

WRRDA deals with coastal port and waterway projects. Advocates for inland waterways, which traditionally have been funded through surface transportation legislation, are pushing for appropriations to help make a dent in construction, maintenance, and repair backlogs on locks, dams, and waterways.

Federal support for highways comes mainly from the Highway Trust Fund, which is supported by fuel taxes and faces a shortfall in 2020, when the surface transportation bill’s current funding expires.

Congress has used a series of budgetary gimmicks to patch together the trust fund during the last several years. In July more than 250 House members signed a letter urging that tax legislation be used to provide a long-term funding source.

Elaine Nessle, executive director of the Coalition for America’s Gateways and Trade Corridors, said she is intrigued by a proposal by Rep. Alan Lowenthal, D-Calif., for a shipper-paid surcharge that would support a freight transportation trust fund. The proposal, however, has gotten little traction in Congress. Nessle noted US Transportation Department forecasts that US freight volumes will rise 40 percent by 2045. “We need to have a reliable, sufficient, sustainable source of funding,” she said.

Editor's Note: President Trump has said he will place the infrastructure issue at the top of his administration's 2018 legislative agenda. "We're going to get infrastructure; infrastructure is the easiest of all. People want it, Republicans and Democrats," Trump told thehill.com last week.

Permalink Submitted by ferrullig@minds... on Dec 28, 2017 5:14PM EST
Let's try another shipper funded program, just like the Harbor Maintenance Fees. Congress has done wonders with all of that money collected. What's that? they haven't used it all for ports, maybe 40-50%? Fool me once, shame on you, fool me twice shame on me and you.

Very similar story with the